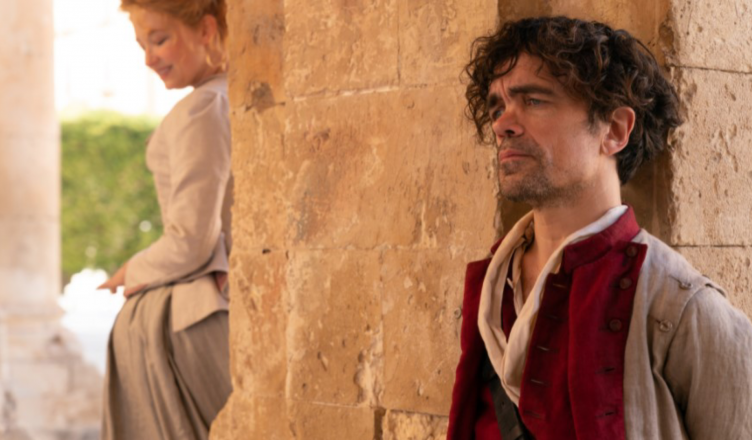 Pining for love: Haley Bennett, as the unattainable object of desire, and Peter Dinklage, as the doomed romantic, in ‘Cyrano’.

Admittedly this take – a film version of the 2018 musical stage production by Erica Schmidt (who also did the screenplay) – sidesteps the comedy embraced by its famous forebears, opting instead for a more serious, lugubrious retelling of Rostand’s biting tale of longing and doomed desire.

Nonetheless, Cyrano stacks up nicely as a quality film for grown-ups looking for something beyond the realm of the rom-com, spiced by a spirited central performance by Peter Dinklage (Game of Thrones; The Station Agent).

Set amidst a host of beautifully lit heritage-listed Sicilian locales, we meet Cyrano (Dinklage) as a proto-social justice warrior invoking a spot of cancel culture on a popular stage actor who Cyrano has decided is no longer worthy of adulation or attention.

It’s a pretty loathesome (and rather off-putting) act, but it’s his way with words that cuts through, particularly with his long-time friend Roxanne (Haley Bennett), who is watching the stunt play out alongside her date De Guiche (Ben Mendelsohn), an army commander who has designs on her and is also Cyrano’s unfriendly boss.

As the classic story goes, Cyrano is hopelessly in love with Roxanne, but knows he can never have her because of their supposed physical incompatibility, his short stature replacing the long nose of legend that traditionally stood between Cyrano and his long-time love.

Roxanne considers him a close friend, but is hopelessly in love with Christian de Neuvillette (Kelvin Harrison Jr.), a newly arrived soldier who she regards as beautiful.

She is also in love with romantic poetry, yet Christian has neither the elocution nor the eloquence to satisfy her ears as he does her eyes. In other words, his looks turn her on while his speech turns her off, illustrated pungently in one of the film’s best scenes.

So, in an act of romantic devotion that remains unique, Cyrano offers to ghost-write love letters to Roxanne on behalf of Christian, a ruse that surely qualifies as an early form of catfishing.

On point direction by Joe Wright (Pride and Prejudice; Atonement; Hanna; The Woman in the Window) effectively draws out the themes of longing and unrequited love at the heart of the story, embodied with all due wistfulness by Dinklage and those ever-so-photogenic puppy dog eyes.

While Dinklage is impressive as the semi-tragic lead, some of the scenes in the first reel do sit awkwardly with the rest of the film; in the fight scenes, for instance, Cyrano appears possessed with super-human strength and Yoda-level swordsmanship. Hmm. You can see him fighting off two men – but 10?

Harrison is fine as Christian, yet Haley Bennett rings a little hollow as Roxanne. There’s no issue with her gleaming porcelain beauty, yet the depth of feeling needed to back up her emotional state is lacking.

Dramatically, Cyrano does a very good job highlighting an aspect of the story that helps account for its enduring appeal – namely, the notion of romantic chivalry, where the interests of the woman are put above all else, her right to choose superseding all other amourous agendas.

So, how does this version of Cyrano de Bergerac stack up against the other famous film interpretations?

For sure it’s earned its place, though, to be honest, that’s at the far end of the queue behind three formidable antecedents.

There’s the seminal 1950 rendition Cyrano de Bergerac with José Ferrer owning the film and setting the standard for Cyrano; Gérard Depardieu gave the doomed romantic his heft in the fabulous 1990 French film; and, of course, Steve Martin hit a career high in 1987 with his contemporary comedy take Roxanne.

As fine a film as it is, Cyrano deliberately eschews the comic zing of the story for a more downbeat delving into the exquisite pain of asymmetrical love.

Perhaps this accounts for why they did away with that famous nose, which was designed to draw the type of laughter this version clearly wasn’t after.

It’s also telling that the nose gags from the original version are not matched in Cyrano by a string of jokes or putdowns about Cyrano’s short stature.

It might have been a case of stepping carefully through a woke minefield, yet one wanly wishes they could have retained that distinctive comic beat without derailing the film’s dramatic intent.

Ah well, you can’t get everything you want in life, one of the story’s big lessons – depending on which version you favour, of course.