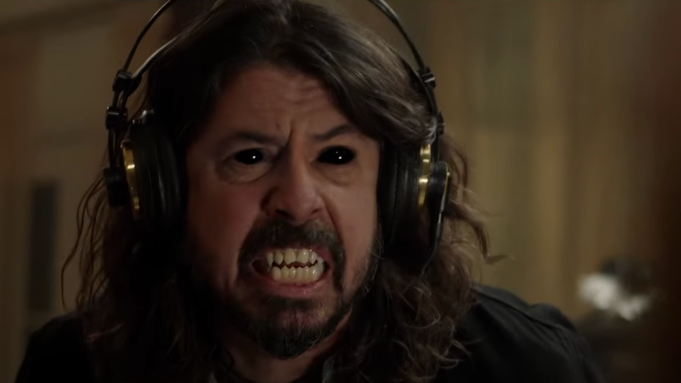 STUDIO 666 1/2 a star (107 minutes) R18+
The warning signs come early that The Foo Fighters’ horror-comedy vanity project Studio 666 is going to quickly shape up as an unholy stinker.

The band members, all playing themselves, are in a record company boardroom doing that schtick where swearing constantly and loudly is supposed to constitute a form of comedy.

In an effort to get the band’s creative juices going, their debt-ridden manager (Jeff Garlin from Curb Your EnthusiasmStudio 666 when you realize this is the worst frigging musician-spawned movie since Paul McCartney’s disastrous Give My Regards to Broad Street way back in 1984. (At least that movie had a stellar soundtrack – and Bryan Brown.)

Studio 666 makes abundantly clear why Dave Grohl and the rest of The Foo Fighters are renown as world-conquering musicians, not as actors. It’s hard to tell whether they are all really bad at acting, whether B. J. McDonnell is a really bad director, or both.

What is not hard to tell is that if Dave Grohl ever does anything else as embarrassing as his performance in this clueless, excrementally bad film then we’re all in trouble.

Even those with a casual interest in Grohl and The Foo Fighters admire his formidable talent and creative legacy, going back to his time as drummer with Nirvana.

One fondly recalls the wonderful 2020 documentary We Are the Thousand, about 1000 Italian Foo Fighter fans who formed as massive musical ensemble to sing their hit Learn to Fly in a bid to get them perform in their town. It worked. What a stirring testament to the band that turned out to be.

The band’s long string of hits and the breezy style of their music videos should have made the prospect of a Foo Fighters film something to embrace.

Yet what pours forth here is a poorly conceived horror-comedy travesty, a pastiche of old-school practical effects with blood and flesh flying all over the place and acting so wooden you could make a nest of tables out of it.

There is one telling moment, intended no doubt as a spot of self-parody, where Grohl reacts violently to one of the band members saying “no” to him. “I’m a rock star!” he bleats as others hold him back.

It’s just a theory, this, but it’s conceivable that the reason why this dreck got made is because of that very issue, that nobody had the guts or the gall or the balls to say during the development process: “hey, this thing we’re doing. It’s crap.”

The film is infuriating enough to make even a minimal fan of the band take quill to parchment in an earnest letter plaintively asking: Dear Dave Grohl – W.T.F?

For horror movie fans there is some marginal value in witnessing the gory special make-up effects where bodies are fried, sliced and diced in ways that recall the good old days of the 1970s and 80s. There’s also laugh value in the fangs Grohl brandishes when he’s possessed. They have a distinctive toy-store look to them.

If Studio 666 is intended as a film for their fans, one can reasonably postulate that somewhere in the Foo Fighters organization it was deemed that the band has too many fans and that the film was a means of reducing their number.

It’s difficult to think of the last film that dumped so heavily on an existing fanbase. The Phantom Menace, Home Alone 2, Matrix Resurrections come to mind.

Now, just to cover the worst case scenario, it’s possible some diehard fans will feel so insulted by Studio 666 they will seize the earliest opportunity to destroy/delete all their Foo Fighter albums, trash their tour t-shirts, pulp their posters, erase heir tattoos and so forth.

Please do not do this.

All artists, even great ones like the Foo Fighters, stumble. Nobody, no matter how brilliant, is immune to that syndrome that comes with wealth, fame and power, wherein the ability to do what they want clouds the wisdom needed to counsel them as to whether they should.

So, let’s give The Foo Fighters the benefit of the doubt and chalk up this venture as a misstep, the hope being that they will either stop making movies altogether, or ensure the next one they make has the artistry, wit and proficiency so abundant in their music, but which is sadly lacking in almost every frame of Studio 666.