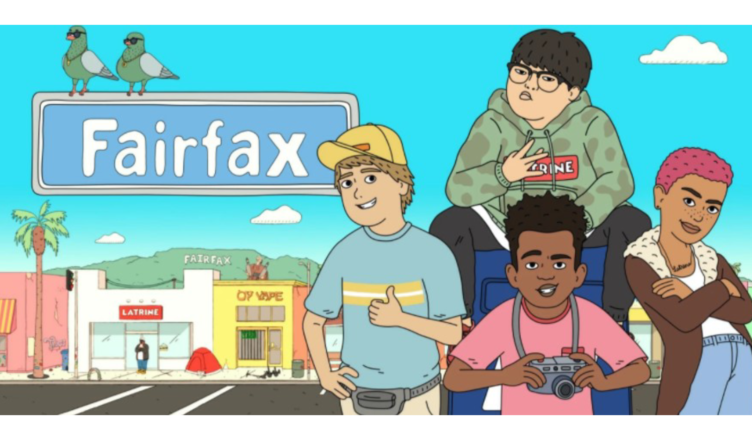 Gang of Four: A quartet of teens strive for social media supremacy in ‘Fairfax’.

Thanks largely to the seismic advent of digital culture (in general) and social media (in particular), modern society and the humans within now sport so much silliness and so many absurdities that it seems they can’t be satirized enough.

It’s a fertile, target-rich terrain that the likeable, relatable eight-part animated series Fairfax merrily skips through rather than angrily stomps across, its congenial brand of satire sticking to the big and obvious, never going too dark or too deep as it rummages around through the excesses of 21st century consumerist culture.

The admittedly pedestrian premise sees Dale (voiced by Skyler Gisondo), a white, Jewish middle-schooler from Oregon obsessed with life online, move to the LA-type town of Fairfax where he quickly falls in with a gang of like-minded teens, Derica (Kiersey Clemons), Benny (Peter S. Kim) and Truman (Jaboukie Young-White).

In the series opener they, like everybody else in town, are in pursuit of a Dr Phil T-shirt, the latest “drop” from Latrine, a streetwear brand with ubiquitous signage and a powerful hold over its young fans, who are hooked on the anticipatory thrill of the next release.

The show’s scenario is now a familiar one: kids obsessed by their devices; slaves to Instagram and the like; following the whims of social media as if they were scripture; obeying every prompt to go buy the latest thing; regarding their online profile as far more important that what happens IRL. (That’s “in real life” for the uninitiated.)

It’s hard not to warm to the show’s playful scene setting; there’s an aged Guns’n’Roses groupie working as a waitress; the school headmaster is an over-the-hill dimwit who desperately wants to be down with the kids (apologies for that very 1990s expression); Joaquin Phoenix is a bearded local working on his performance art.

In this town trends are so fickle that things go in and out of fashion the same day, a lovely echo – however unintended – of David Lee Roth’s observation about modern pop culture: “Here today, gone later today”.*

One of the show’s running gags is the phenomenon of Yung Polluter, an anti-PC reactionary rapper who advocates destroying the environment. Love it.

Fairfax has a lot of fun with these kids as they strive to become influencers, all the time trying to also live an actual life.

A rather smart, nicely honed story in Big Peens (episode two) has Dale reinventing himself so he can hit the 100 followers he needs to attend a hipper-than-hip party and so further his chances with a girl he likes, and who likes him. But can he do both and remain true to himself?

It’s a savvy deployment by the show’s storytellers of the irony hammer, that easy-to-hold, hard-to-handle instrument all satirists brandish, but few master.

And, to the show’s credit, the hammer strikes again in Dale Hates His Dad (episode four), where Fairfax hits its peak.

Dale’s buddy-buddy relationship with his father goes viral, but in the worst possible way, taking flight as fake news saying that he hates his dad. Meanwhile as everybody’s attention is consumed by that nonsense, an environmental issue that genuinely needs attention and public support can’t scare up a single follower.

These are prime examples where the ideas and the execution are in sync. But that’s not always the case as the Fairfax crew attend a Chernobyl-themed festival, visit an old people’s home, get ensnared by corporate catfishing and search for a golden chip that will win them a tour of the Latrine facility (a nod to Willy Wonka and the Chocolate Factory that goes on too long).

For all its zeitgeist box ticking and shadow boxing, Fairfax prods but rarely punches or punctures its targets. It’s more amusing than outright funny, with only a few genuine laugh-out-loud moments.

One of the central issues with the show is that it mistakes pop references for jokes.

Dropping a pop reference can get a laugh, provided you do something with it, such as use it as a punchline, to illustrate a point or propel a story.

It’s been a long-standing practice in film and especially TV over the past 25 years or so, most prominent in shows such as Gilmore Girls, which did it poorly, The Big Bang Theory, which did it exceptionally well, and South Park, which does it brilliantly.

Fairfax sometimes overdoes it. The first episode, cheekily titled Pilot, is so crammed with references it’s hard to keep up. Things improve once the style settles down to focus more on story.

Regrettably, one big drawback about Fairfax is its standard of animation, which is pretty ordinary. It was made with the popular Flash animation system but the result, despite all the obvious effort, is often stilted.

Visually it’s passable, but it’s just not very good looking. You find yourself having to constantly forgive the show for how thin and stilted the animation is.

The series is graced by two birds who observe and comment on the goings on in the town. They’re cute, but like a lot of the material in Fairfax, they’re a good idea that needs more edge. If only they were more like stoner versions of Statler and Waldorf from The Muppets.

Still, in the closing to the final episode they do mention a second season of Fairfax; if the birds speak the truth, here’s hoping the show comes back brandishing the same satirical attitude but with sharper teeth and a bit more daring.

* David Lee Roth was lead singer of Van Halen, a rock band that was very big in the 1980s. If this is news to you, hit Google.