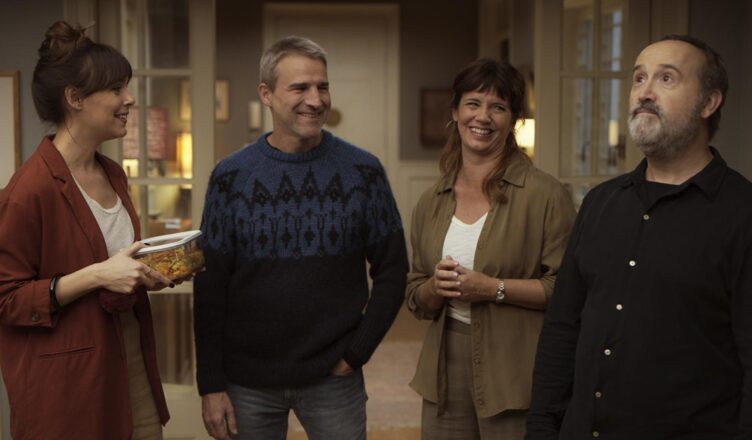 Sex talk: A warring couple learn about their noisy neighbours in ‘The People Upstairs’.

THE PEOPLE UPSTAIRS **** (82 minutes; subtitled) M
From Spain comes a cracker of a sex comedy as a couple on the verge of a major marriage fail meet their neighbours from the apartment above.

Set mostly within the confines of their very ordered apartment, music teacher Julio (Javier Cámara) and his wife Ana (Griselda Siciliani) begin proceedings with a superbly directed conversation where they engage in an obviously intense argument without actually raising their voices.

It’s a lacerating, wit-laden exchange of barbs as Ana reveals to Julio the entirely unwelcome news that she has invited their neighbours Salva (Alberto San Juan) and Laura (Belén Cuesta) for a spot of dinner.

Her motive is so they can gingerly address with them the amount of noise thundering down through the ceiling, shaking paintings off the walls and depriving them of sleep.

What begins as the type of two-hander Neil Simon was so great at sculpting becomes a feisty foursome as the true nature of the neighbours’ noise-making is laid bare.

The encounter serves to highlight the rifts in their marriage and matters escalate as Laura turns amateur psychologist, offering some “helpful” hints about how the couple can best improve their relationship.

The quartet bounce off each other superbly, with writer/director Cesc Gay’s mastery of precision comic timing creating more laugh-out-loud moments than you’d expect from a film as brief as this.

The performances are terrific, though Javier Camara does stand-out as the linchpin of the piece. Gay, who worked with him on Truman, appears infatuated with Camara’s mesmeric face, a visage that seems half a size too small for the head in which it is embedded.

Blessed with inscrutable eyes that look like two tiny dots of India ink, Camara possesses the ability to convey bemusement, befuddlement and bewilderment all with a single stare, and during a brief pause. That’s quite a gift.

Also known as Sentimental, The People Upstairs is a very funny film about unhappiness, its causes, symptoms and possible cures.

It also pits the traditional model of marriage against the type of “open” marriages that were especially popular back when people were lining up around the block to see Bob and Carol and Ted and Alice.

Placed squarely at the centre of the piece is the relationship riddle that everybody from Orson Welles to Woody Allen has joked about; namely, that warring couples can bicker, pick and scream at each other until their faces turn Avatar-blue, yet when faced with the prospect of actual dissolution something much deeper than mere acrimony is triggered.

Gay has given us a wily and very funny comic gem with The People Upstairs. The film is up for a swag of Spanish film awards, but let’s see how long it is before it receives the ultimate accolade by becoming Americanized.