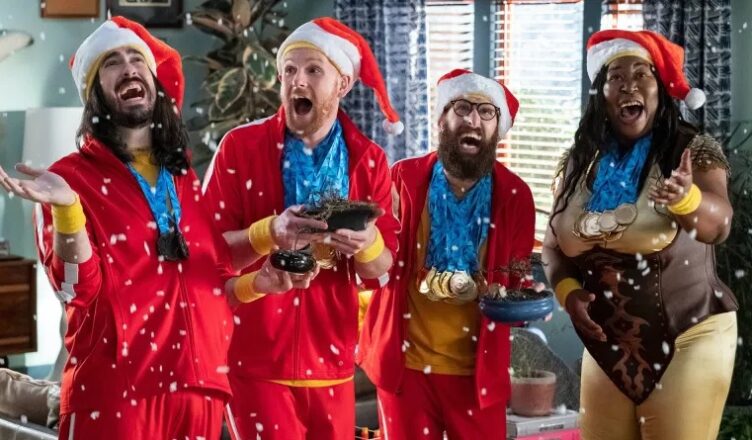 The show is like a comedic Catherine Wheel with ideas sparking off in all directions creating a cascade of skits, semi-skits, musical numbers and routines, most with a gleefully scant regard for structure, coherence or character.

The danger of such a scattershot format, of course, is that having things geared at such a clip means that sticking with an idea for more than 30 seconds or so runs the risk of impeding the flow. Fortunately, that doesn’t happen.

One of the great joys of Aunty Donna’s Big Ol’ House of Fun is that it has no agenda or message or any pretense whatsoever to depth or meaning or social commentary, with no pithy observations about politics or religion or the human condition. Nothing that is detectable after two viewing of all six eps, anyway.

There is one worrying moment during a sketch where it almost looks like Aunty Donna is going to say something profound and important about the issue of cultural stereotyping. The eventual punchline to the segment, however, had this reviewer caterwauling like an idiot with laughter.

So, too, did the marvellous Quiz Show skit, which boasts some clever word play banter that will have fans of The Two Ronnies keeling over with delight.

Then there’s the sports official who pops by to administer a urine test. It’s hilarious, a prime example of turning bad taste into comedy gold.

In an era where it’s almost mandatory for comedians to have some syllabus running under their material, it is comes as blessed relief to behold comedy that is funny for the sake of being funny.

With very few specific cultural references the series is unlikely to age quickly. That makes for a welcome contrast to so much Australian TV comedy that is so obsessed with commentary and current events it often dates while you are watching it.

The Aunty Donna trio were born, raised, nurtured and seasoned in Australia – bonding at the University of Ballarat, no less – along with their creative collaborators Sam Lingham, Max Miller and Tom Armstrong, each of whom, as intrinsic parts of the Aunty Donna troupe, are also part of the show.

Alas, Aunty Donna’s Big Ol’ House of Fun is not an Australian show. It’s American, boasting Ed Helms (The Office) as an executive producer, who also chimes in with a memorable cameo.

That might strike some as a tad odd. Given Aunty Donna’s hit live shows and huge online following on YouTube and Facebook that local TV would have seized the chance to make a series with them.

But in keeping with a long-standing tradition, it was a US outfit, Netflix, that stepped up.

So, along with delivering a patently zany, off-the-wall comedy series that can be easily gulped whole in one sitting, Aunty Donna’s Big Ol’ House of Fun gives us yet another reason to love Americans, whose enthusiasm for recognizing and embracing Australian talent has a track record so strong it’s embarrassing. At least in this case.