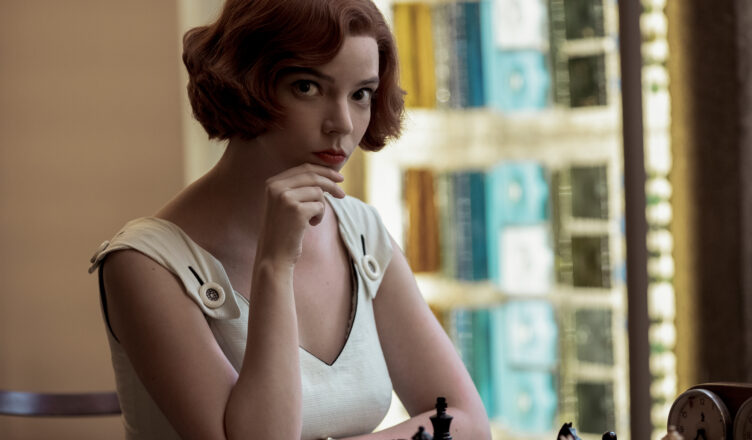 THE QUEEN’S GAMBIT ***1/2 (393 minutes; seven episodes) MA
Revealed late in the seductive and engaging hero’s odyssey of The Queen’s Gambit is how, along with all the other debilitating symptoms of alcoholism, is the inability to properly apply eyeliner.

There’s young chess genius Beth Harmon turning up for an appointment in the 1960s and, through her alcoholic haze, has made herself up to look like the lead singer of a Goth band.

She’s still radiantly beautiful, though. That Beth’s exquisite, porcelain features remain so remarkably untouched by the scourge of alcohol and drug abuse is one of the few flaws in an otherwise fabulously entertaining, fictitious tale of how an orphaned girl found sanctuary, power, meaning – and eventually herself – through the mastery of chess.

Discovering the game via the janitor at her orphanage, the nine-year old Beth (played by Isla Johnston) develops an intuitive understanding and deep affinity for the game thanks to the state-issued tranquilizers given to the kids, to which she promptly becomes addicted.

Fostered out in her teens to a less-than-ideal middle-aged couple, Beth (now played by Anya Taylor-Joy) develops her skills to the point where she wins money at tournaments.

This instantly spikes the interest of her booze hound mother (Marielle Heller) who begins managing Beth to success in major national competitions. It’s a cerebral turkey shoot for Beth, who thrashes her way through a male-dominated field without batting a single, perfectly sculpted eyelash – but with the help of her performance enhancing little pills.

Beth blossoms from icy wallflower bullied at high school to self-confident giant killer of the chess board, and winning big in Moscow becomes her Holy Grail – provided she can keep her addictions and growing taste for the 1960s wild life under control. Eager for life experiences, she gets into music and hangs out with hippies, whose give her journey of self-discovery a timely boost.

She can’t quite shake her socially awkward nature, though. Beth’s relationships with boys is chiefly channeled through the chess board that – yes – can be taken as a metaphor for sex, or at least the desire for romance, which she finds elusive.

Close encounters with high-flying chess rivals often turn out to be exercises in frustration for both parties, though not always at the same time.

One memorable tract sees Beth being coached by Harry Beltik (Harry Melling from the Harry Potter films), a nerdy, hubristic chess champion whose giant ego and expectations of an easy kill she crushed at her first tournament.

They become friends, though there’s clearly a lot more going on than chess. Clearly infatuated with Beth, Harry is hit with the torture of an unstated platonic relationship. Will proximity lead to intimacy? He can teach her, but dare he touch her?

One of the subdued joys of Taylor-Joy’s performance is how it is implied, but never declared, that Beth is aware of the affect her looks have on men. As her skills become ever sharper, there are suggestions she also subtly uses her looks to put her invariably male competitors off their game.

That’s a theory, of course, but why be coy? It’s perfectly reasonable to presume that the very last thing a guy wants when sitting down to a high-pressure chess match is to be greeted by an opponent with beguiling beauty and a pair of piercing, Disney-princess eyes capable of shooting off a laser-like stare that can drill all the way through to the back of the skull. Then to discover a few moves in that she aims to destroy. Talk about putting your adversary at a disadvantage.

On that score there’s no faulting the casting of Anya Taylor-Joy as Beth. Not only is she lovely to look at – no minor consideration in a seven-hour show – she puts in a sterling tour de force performance. Centre-frame most of the time, she plays chess like she means it, inhabiting Beth as a proto-feminist rebel battling the values of her time and the demons within to stay on top of her game and realize her dream.

Director Scott Frank, who created the series with Allan Scott from the 1983 book by Walter Tevis, does a great job fusing our concern for Beth from the outset so that her trials and triumphs are deeply felt. This is especially potent when Beth goes public and becomes a celebrity as her blistering talent emasculates the dismissive attitude that greets her on the male-dominated chess tournament circuit.

The pacing of The Queen’s Gambit is leisurely and while some might quibble that it moves too slowly, the quality of the supporting performances – especially from Thomas Brodie-Sangster as a rival-turned-pal – the lush cinematography (by Steven Meizler) and the mesmeric presence of Taylor-Joy keep you hooked.

As with so many stream offerings, the production values of The Queen’s Gambit are sumptuous, with the exacting 1960s period detail going from giant tournament halls right down to the bathroom wallpaper.

The visions that open some scenes are truly breath-taking, the most jaw-dropping being the tracking shot that follows Beth into the glorious giant foyer of a Las Vegas hotel. It’s truly marvellous, a great example of the cinematic quality many shows now achieve.

As entertaining as The Queen’s Gambit is, it needs to be said that the chess is treated more seriously than Beth’s addiction to alcohol and drugs, which remains a secondary story element throughout.

While we see her suffer, the full, destructive nature of addiction never really bears down on Beth. The worst that happens is that she turns up slightly late and a little dishevelled for an important match. A more brutal portrayal of her addictions would have seen her missing key games, passing out mid-contest, blacking out and, perhaps, throwing up over the chess board.

As it is, addiction never really hurts Beth’s rise through the chess world. It’s just a problem she deals with. She stumbles, but never falls into a hole she can’t scamper out of with a bit of will power.

Somewhat implausibly, Beth’s beautiful visage is also impervious to the ravages of drug and alcohol addiction. The brilliant whites of her eyes are never troubled by the yellowing of jaundice, her skin remains pristine without a sore or blemish or crack to betray her alcoholism.

That’s the only real shortcoming in The Queen’s Gambit. Hugely entertaining as it is, it would have been instructive for a scene or two showing threat to the promise of her future, the thing addiction typically steals from its victims.