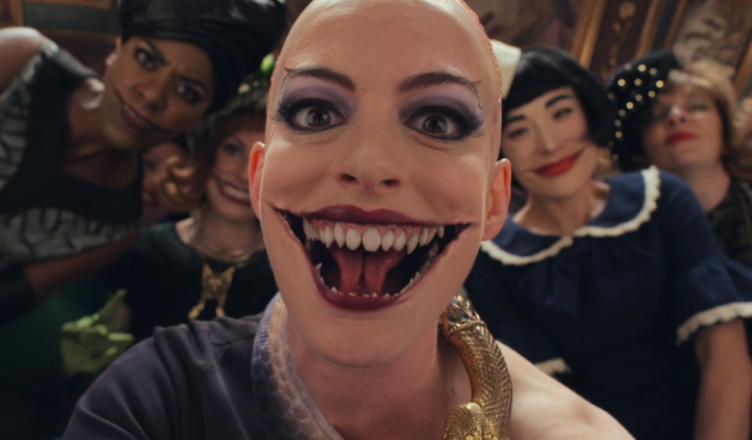 ROALD DAHL’S THE WITCHES **1/2 (104 minutes) M
Acknowledging how deeply beloved the 1990 film by Nicholas Roeg is, Robert Zemeckis (Back to the Future; Roger Rabbit) has nonetheless done a passable, if unremarkable job with his makeover of Roald Dahl’s dark tale about a coven of holidaying witches plotting to turn the world’s children into mice.

A showcase of impressive visual effects hit highs when turning children into other critters and witches into rats. Anne Hathaway can’t top Anjelica Huston’s performance as head witch, but shows the requisite relish.

The attempt to inject a racial subtext by shifting the story’s setting to Civil Rights-era Alabama doesn’t quite come off; the witches aren’t human so can’t really serve as symbols of anything other than generalized evil.

Octavia Spencer carries most of the film while her child co-star Jahzir Kadeem spends much of his screen time providing the voice for a digitized mouse. The film does feature a lot of comic scares, so sensitive kids should be cautioned. Please note that M rating.

LASSIE COME HOME **1/2 (96 minutes) PG
It’s so reassuring to know, in the troubled/unprecedented/strange times in which we live, that there are some traditional values we can rely on. Chief among these is that when Lassie jumps over something, she does it in glorious slow motion.

There’s plenty of Lassie Love in the cinematography of the pleasantly forgettable Lassie Come Home, or, to give it its full German title Lassie – Eine abenteuerliche Reise (which actually translates as Lassie: An Adventurous Story, but why carp?) And don’t worry, by the way. The film is dubbed into English.

Relocation is Lassie’s central dilemma here. Because of the bad economy the local glassworks factory has to shut down Lassie’s family has to move into the city, so Lassie has to be temporarily housed elsewhere.

Lassie breaks free and treks homeward while everybody goes looking for her, including the film’s comic villain, who unfortunately does not pose enough of a threat to make this Lassie tale all that adventurous. It’s passable, but far from memorable family movie fodder.

Still, the film does serve as yet another reminder – not that we needed one – of the cinematic legacy of dogs. That bond between canines and humans is something cats would surely envy, if they cared.

Here’s yet another Australian film that makes no emotional sense and has no audience in mind.

There needs to be a rule before anyone starts shooting that filmmakers must ask everyone involved: “who is going to pay $20 to see this, and will they then tell their friends to see it?” Until those questions have decent answers, nothing should be allowed proceed.

The set-up involves a school reunion of sorts, with some sword-crossing and cuss words about things that happened years ago. Apparently, some people have trouble letting things go, but it’s just too difficult to care about any of the participants, most of whom should have headed to the nearest kebab outlet as soon as they sensed the soiree was a dud.