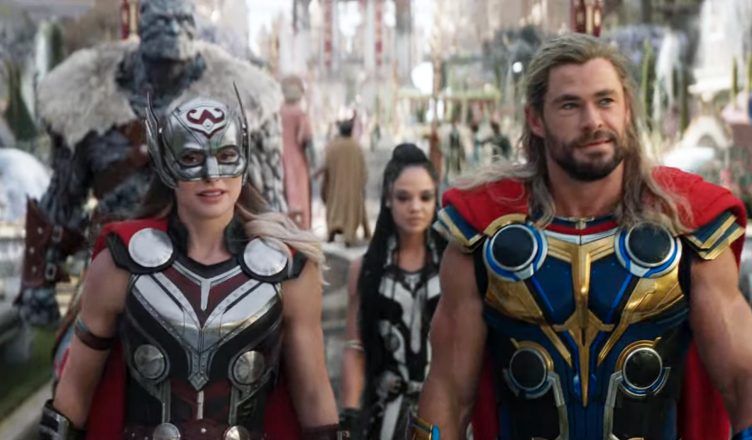 THOR: LOVE AND THUNDER *** (119 minutes) M
Of all the things our beloved intergalactic superhero Thor (Chris Hemsworth, now also a producer) collides with throughout his latest fun-filled inter-dimensional adventure, the most formidable turns out to be the dreaded Law of Diminishing Returns.

Thor: Love and Thunder is the fourth Thor film from Marvel, and while it continues the comic turn the sub-franchise took with Thor: Ragnarok, which helped make up for 2013’s utterly forgettable Thor: The Dark World (well, can you remember anything about it?), there are stretches here where the lark is almost too jokey and starts wearing thin.

Again directed by Taika Waititi, it’s an enjoyable jaunt, to be sure, though the comedy pedal is often pressed a tad too hard with characters dropping gags repeatedly, making light of the mayhem around them, thus sapping the proceedings of tension or any real sense of threat. Even the kidnapping and imprisonment of children is framed by levity and is free of gravitas.

With nothing much to anchor the film dramatically – not even the presence of Christian Bale as a super-villain registers as anything more than a perfunctory nemesis – Thor 4 feels like yet another throwaway epic stamped out by Marvel.

While Thor 3 was a superhero film with comedy in it, Thor 4 often feels like a parody of a superhero movie, crammed with over-egged humour and forced punchlines, the light-hearted central performance from Hemsworth being a galaxy away from the heft he and director Kenneth Branagh brought to the original Thor way back in 2011. Diehard fans of the Marvel Cinematic Universe who have invested deeply in the lore of these films might feel short-changed, cheated even.

It’s a reliable rule of thumb for any action film that when characters start gagging about their catchphrases you’re now in lampoon territory. Indeed, once Russell Crowe enters the fray with an admittedly memorable turn as Zeus it feels as though Thor: Love and Thunder has stepped through the looking glass and turned into a Mel Brooks film.

As for Thor’s homeland being reimagined as a hokey seaside tourist attraction offering merch and rides on Viking boats, the concept brings to mind the Brooks classic Spaceballs. (Reading too much into it? Probably.)

OK, so having laboured the point that not even an almighty alpha superhero can ward off the gravitational pull of sequelitis, as far as disposable, popcorn-pushing multiplex fodder goes, Thor: Love and Thunder hits enough marks to register as a sufficiently entertaining, fun super-sized time-killer.

The main attraction here is the reappearance of old flame Jane Foster (Natalie Portman) into Thor’s orbit. Now in possession of Thor’s reconstituted hammer, she can now join him in the world-saving quest of neutralizing Gorr (Christian Bale), a vengeful soul determined to rid the universe of all gods with the aid of a magical sword, the latest in a long line of magical movie swords.

Alas, for all its power-blessing qualities, the hammer can’t do much to help Jane’s fight with terminal illness, which is handled quite clumsily, incorporating clichés that go back to Ali McGraw in 1970’s Love Story. It’s a rather shallow plea for audience sympathy that comes over a little cheap. Did Waititi, who co-wrote the screenplay, really have to resort to such a platitude?

Alongside the lack of any real dramatic consequence, the visuals in Thor 4 are a little disappointing despite all their flash and sparkle.

Oh, they’re manifestly adequate and as polished as we’ve now been conditioned to expect from studio films, yet there’s nothing new or particularly exciting on offer, with no stand-out sequence or signature set piece.

What’s served up is the usual big-movie concoction of energy beams and bolts of (usually blue) lightning. In this important regard, the film compares poorly with Thor: Ragnarok, which was stuffed to the gills with great VFX work.

All up, Thor: Love and Thunder ain’t great, but it’s not bad. It certainly is good for a laugh even though it sometimes veers too close to becoming a joke.