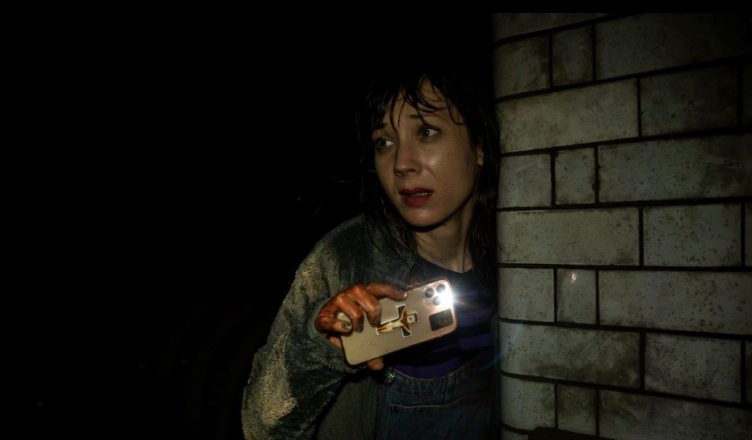 DASHCAM ***1/2 (80 minutes) R18+
In one of the best iterations yet of what we can now refer to as “the Blair Witch aesthetic”, Dashcam takes us on a genuinely horrifying, singularly bloody, enormously enjoyable found-footage hellride through the darkened backroads of rural Britain as two people with a fractured friendship deal with the Undead – all while live-streaming their gruesome, gory experience to a captivated online audience.

In an admirably counter-intuitive move, our chief protagonist is a young American woman who is rather obnoxious and dislikable, not so much because Annie (Annie Hardy) is a pro-Trump, MAGA-hat wearing, anti-vaccine, COVID-denying conspiracy theorist rapper with a big mouth and no manners, but because she deliberately disrupts the life of her friend Stretch (Amar Chadha-Patel).

While the poor sod’s asleep with his girlfriend, Annie drops in on him immediately after touching down in a locked-down UK, wasting no time throwing a promotional-sized spanner into his life.

After putting the girlfriend on edge, Annie messes around with his job as a late-night food delivery driver before taking liberties with his car, all the time playing up to her camera, sharing her hijinks with her online viewers as they provide a running commentary on the side of the screen.

But what starts out as a high-spirited lark soon morphs into a riveting, armrest-clutching Zombie Blair Witch once a troublesome passenger comes into play.

Fans of horror, especially the sub-genre of found footage/social media horror spawned by Blair Witch will happily hand it to writer/director Rob Savage and his crew for the great skill with which Dashcam is executed.

Shot in various aspect ratios with varying image quality, the videography is appropriately disjointed and shambolic, the images of over-lit faces and trees recalling the amateur visuals of The Blair Witch Project (which, can you believe, was made back in 1999).

Yet concealed beneath all the jittery shakycam are a lot of very wily, well-judged camera moves and splendid visual effects, all designed to generate suspense and quality scares but made to look spontaneous or as though they were captured by accident.

It’s the opposite of what we see in a conventional horror-thriller film, where techniques and devices are usually on show for fans to admire. Here, all that work is disguised and made to fit in with the film’s jagged social media style.

Furthermore, the film raises a great poser about our love of horror films and the relationships we form with on-screen victims.

The intriguing decision to have the main character initially be so repulsive makes for a deliciously conflicted viewing experience as instinct battles against instinct.

Annie is a loathsome human being, to be sure, yet can you develop sympathy for such a person as you witness them enduring successive horrors? Dashcam seems to issue this challenge to the Horror Faithful as Annie and Stretch try surviving a night of escalating nastiness.

In the sub-genre of found footage/social media horror films, Dashcam easily sits alongside other prime entries such as Spree, Unfriended, Rec, Lake Mungo (an unheralded Australian film), Searching and The Host, also directed by Rob Savage. With no apologies to the squeamish, it does not disappoint.

The film’s novel final credit crawl reminds us that, no matter how graphic, gory or realistic a horror film is, it’s all fun and games, the nightmare on screen being safely abstracted and nothing compared to everyday horrors of the real world.