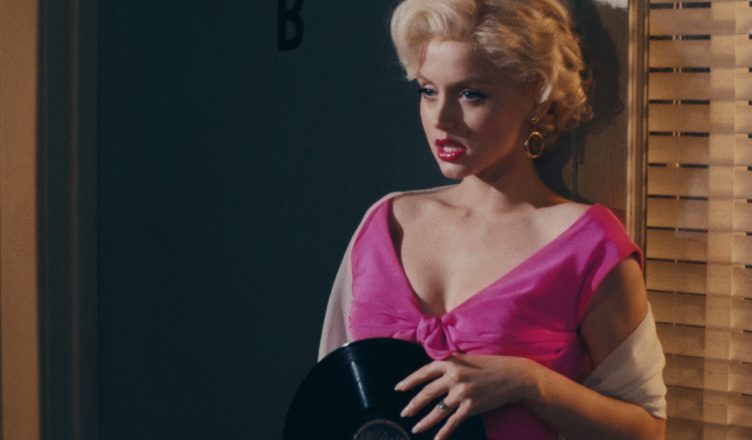 BLONDE **1/2 (167 minutes) R
The first thing that needs to be said about Blonde, writer/director Andrew Dominik’s eagerly awaited, much-hyped portrait of Marilyn Monroe, is that the performance by Ana de Armas is very good and sufficiently beguiling to make up for the film’s length and largely joyless tenor.

As well as looking like Marilyn, Ana de Armas dutifully imbues her portrayal with all her signature inflections.

Listening hard for accent lapses to her native Cuban, which has been the subject of much complaining, it’s got to be said there’s not a scene where such a flub is evident enough to be distracting.

As for the film entire, it’s quite an ordeal to behold, an emotionally draining work that plays up the popular image of Marilyn Monroe as a sad and tragic figure, the victim of psychological, sexual and physical abuse from almost everybody she encounters.

And she has daddy issues, her longing for the love of an absent father accounting for her inability to find succour in marriages to a retired athlete (Bobby Cannavale) or an acclaimed writer (Adrien Brody). Neither baseball legend Joe DiMaggio or playwright Arthur Miller are ever named.

Public adoration and Hollywood success count for nothing in this fictionalised faux-biography. She’ll smile and pose on cue for a camera, but her inner anguish keeps her stuck in an unbreakable cycle of misery.

There’s not a lot of joy; Marilyn spends a lot of screentime moping about, a sullen cypher whose enormous fame merely reflects the degree to which she has been exploited. Giant promotional images of her serve as grotesque testament to her image as a shallow, ditzy sex symbol.

Not even that aspect of her life gets a salute. We see a fleeting calendar image of her Playboy pose, yet the culture-changing import of that episode warrants no mention.

As for the iconic moment in The Seven Year Itch where the rush of air from the subway blows up her dress, the film spins the scene as yet another example of how she was used as a mere token of titillation for men, their faces distorted and ogling en masse as the camera pans up from Monroe standing astride on her upskirting air vent.

The unremittingly sombre tone of Blonde does make the film somewhat tough to sit through, at least in one session. Thankfully, you can hit pause and take a breather every hour or so, which is strongly recommended.

It need be stressed that Blonde is not a traditional bio-pic, based as it is on the fictitious 2000 novel by Joyce Carol Oates, which also spawned a 2001 TV film.

Still, even with a greatly reduced obligation to the truth, the side-stepping of so much of her life is disappointing, especially the good stuff, such as her knockout performance in John Huston’s The Misfits, Monroe’s final film.

For all its flaws, Dominik can’t be faulted for bringing some visual vibrance to the film. Blonde jumps between monochrome and colour, the frame toggles back and forth between widescreen to the old-style square Academy format and nothing is filmed or lit in a conventional manner.

The camera bobs and glides through Blonde, unwilling to settle into a consistent style, perhaps intended to reflect Monroe’s haphazard heart and mind.

And while the film boasts some impressive wide shots of streetscapes and crowds, much of the drama is played out in intimate settings, with Marilyn rarely sharing the frame with more than a few people, if any at all.

Imperfect and leisurely paced as the film is, the demanding performance from Ana de Armas commands respect for rising above the film’s shortcomings and lost opportunities, capturing just enough of Marilyn Monroe’s allure & mystique to help make Blonde breathe.

Footnote: Watching the film naturally puts one in mind of the many actresses who have played Monroe, with varying degrees of conviction. Standing tall among these is the splendid, Oscar-nominated performance by Michelle Williams in 2011’s My Week With Marilyn. Set in 1956 during the production of The Prince and the Showgirl, Williams plays Monroe as a recalcitrant but gifted diva opposite Kenneth Branagh’s portrait of Sir Laurence Olivier who hopes that co-starring with the world’s most famous actress will reignite his moribund career. Check it out gratis on Stan.