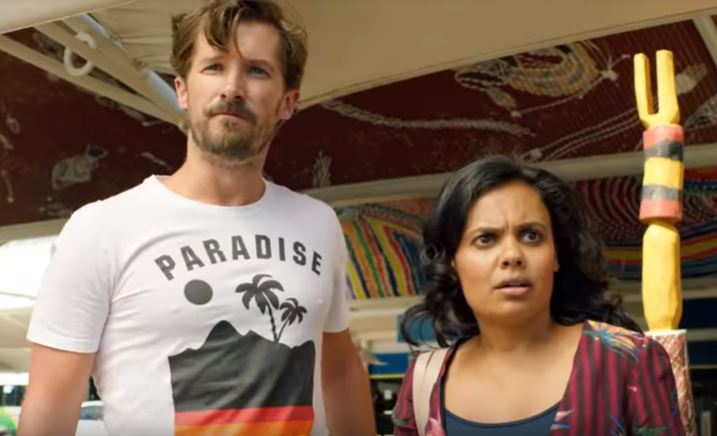 TOP END WEDDING ** (102 minutes) M
There is one truly wonderful quality at the heart of Top End Wedding, even though its flailing attempt to crack the ever-elusive romantic-comedy code falls short the way so many other Australian films have.

The basic premise involves Ned (Gwilym Lee) and Lauren (Miranda Tapsell), two young professionals who are deeply in love and in a rush to get married.

Both are Adelaide lawyers, and Lauren’s sweetly tyrannical boss Hampton (Kerry Fox) has given her freshly promoted charge a spontaneous 10-day holiday to go off and get married so she can return to work undistracted by wedding plans.

Ned is a daffy Brit, Lauren is indigenous and it’s her dream to get married in Darwin amidst her friends and family.

There’s a big rush to get everybody there, but upon arrival Lauren discovers her mother Daphne (Ursula Yovich) has suddenly left her distraught father Trevor (Huw Higginson), who is so upset he keeps locking himself in the pantry to listen to a Chicago ballad over and over.

Lauren declares she can’t get married without her mum present so she and Ned hit the road, traversing the beautiful countryside hoping to track her down and clear up the mystery behind her sudden disappearance.

The great thing about this film – directed by Wayne Blair (The Sapphires), written by Tapsell and Joshua Tyler and photographed with a tourist’s landscape-loving eye by Eric Murray Lui – is its portrayal of indigenous and western culture as blended and unproblematic.

The natural fusion of cultures in the film bears no baggage; there are no big issues debated, no arguments about land rights or mentions of racial politics, not even as side jokes. It’s a refreshing and welcome step forward in Australian cinema and accounts for a few undeniably beautiful moments involving the unifying co-existence of spiritual beliefs.

For avoiding the stridency and moralistic tub-thumping you’d normally expect to go with such cross-cultural content in an Aussie film, Top End Wedding deserves some sort of special award: Most Progressive Portrayal of Cultural Co-habitation, perhaps?

Pray, if only the rest of the film matched that level of achievement.

Sadly, for a film purporting to be a rom-com there are just too many awkward scenes, implausible romantic interludes and just not enough laughs in Top End Wedding.

The story is pitted with inconsistencies and scenes that don’t make emotional sense. There are too many times where you find yourself asking why characters behave in certain ways that grind against common sense.

There are also jarring things in the film that simply go unexplained. For instance, what accounts for Daphne’s dalliances with sex and drugs? How does Lauren launch into her hen’s night when she’s supposed to be worried about her missing mother? How can you drive a vehicle for hundreds of kilometres and not know if it takes diesel or unleaded?

These are just three examples of lazy storytelling that fail the common-sense test; there are plenty of others.

The performances, too, often seem off-key. Tapsell has a bubbly comic presence but she clearly struggles with heavier scenes.

Crucially, Lauren’s quest to find her mother – the driving force of the story – lacks tension or any sense of urgency, even though she and Ned are supposed to be racing against the clock.

Even basic things such as continuity fall short. In one scene set in a gorge, a strong wind magically disappears and reappears. It’s annoying.

The shabby storytelling and plotholes suggest a film that might have gone into production before the screenplay was fully developed and gone over with a cool eye. It’s the return of an old problem, one that beset so many Australian films in the 1980s and 1990s.

Still, much rather the film find a large and forgiving audience who enjoy it than see it slip into the stream after a couple of lean weeks at the cinemas.

Yet again, however, the film appears to lack a decent public profile. Being released a week after the new Avengers film won’t help, though small films have been seen to thrive in a congested marketplace as people seek alternatives to noisy blockbusters.

Sadly, this is unlikely to be the case, if your humble reviewer’s experience on opening day is anything to go by. Eager to see the film a second time to double check the flaws detected at the preview screening, the 1pm session at a major suburban multiplex boasted a mere 4% capacity. The following session at 3.30pm: 2% capacity.

So, if you’re broad-minded enough to imagine intimacy between a goddess-like beauty such as Charlize Theron and the hirsute schlub that is Seth Rogen, you’ll enjoy this salty, above-average, politically tinged, odd-couple rom-com.

Theron plays ambitious, unmarried Secretary of State Charlotte Field, eager to be endorsed by her dim-witted Commander-in-Chief (Bob Odenkirk in a funny thumbnail performance) to run for president.

As rom-com law demands, Fred had a huge crush on Charlotte when she was his babysitter. The supposedly insightful connection gets him a job as her speechwriter, as she needs somebody to help her appeal to the common American.

Again adhering to rom com dictates, the unlikeliness of them ever hooking up romantically makes their coupling inevitable, thus disrupting everybody’s idealised notions of romance.

Though overlong by about 20 minutes (in keeping with most American comedies) and with way too much cussing (in keeping with most Seth Rogen comedies), director Jonathan Levine (50/50; Warm Bodies; Snatched) plays on the rough-house chemistry between the leads, with Rogen registering the “am I dreaming?” euphoria of being with somebody so hot. She, on the other hand, has to contend with her entourage telling her how bad the romance is for business.

As over-cooked as the film gets – there’s the inevitable stoner scene – it does deserve special kudos for pushing against Hollywood’s left-leaning politics and daring to satirise the Democrat presumption that they’re always morally right.

One stand-out scene has the Right-hating Flarsky facing down his own hypocrisy when he confronts the fact that Republicans and Christians can be good people.

This deft stirring in of politics amidst all the film’s rom-com chestnuts add a nice bit of spice to this lively offering.