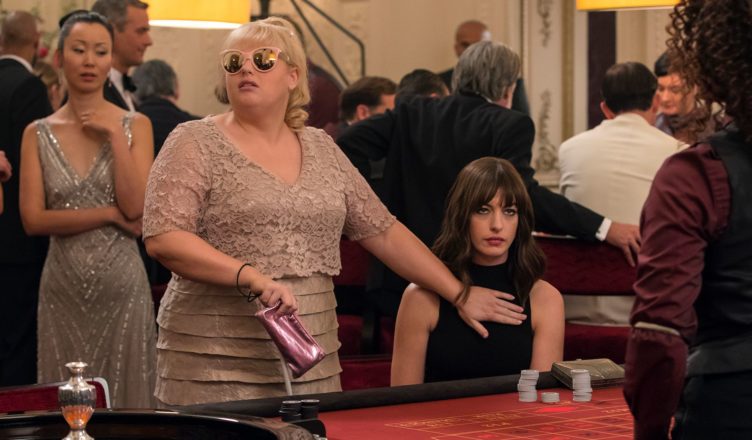 Passable remake: Rebel Wilson feels her way through ‘The Hustle’ with the help of Anne Hathaway.

THE HUSTLE **1/2 (94 minutes) M
In an enjoyable, if unexceptional remake of 1988’s Dirty Rotten Scoundrels Anne Hathaway is impressive as a beautiful high-class confidence trickster working the French Riviera. She is forced to mentor Rebel Wilson’s cunning but nascent scamster and together they plan a major heist.

There are sufficient laughs to make this carbon-copy worth the effort, which is proficiently directed by Chris Addison (Veep) and co-written by Jac Schaeffer with the predecessor’s team of Stanley Shapiro, Paul Henning and Dale Launer.

Performance-wise, the film is a bit of a showcase for Hathaway, whose luminous versatility shows up Wilson’s klutzy one-note turn, which people will recognise from pretty much every film she’s ever made. (Still, to her credit, she’s as funny as she usually is, so if it ain’t broke…)

The Hustle is the fourth recent example of a “feminised” remake, after Ghostbusters and Ocean’s 8, which were both absolutely awful, and What Men Want, which was very funny. If there is some underlying motive for this trend it is yet to make itself apparent.

ALL IS TRUE *1/2 (101 minutes) M
At a guess it might well have been the fulfillment of some kind of dream for life-long Shakespeare devotee Kenneth Branagh to play The Bard in a movie. So it’s perfectly apt that watching him in All Is True might well induce filmgoers into extended fits of slumber.

The film is set during the sunset of Shakespeare’s life after 1613, the year his cherished Globe theatre went up in flames and he chose to give up writing.

Instead, he turned his talents to gardening and trying to raise a family, in particular his troublesome daughter Susanna (Lydia Wilson), whose prescient, well-articulated desire to be an independent woman comes across as contrived.

Laboured and slow-moving, the film is an uneventful, largely uninteresting dirge about Shakespeare’s home life that only hardcore fans will find enticing.

Branagh has directed several films based on Shakespeare’s works (the best being 1996’s Hamlet) as well as a swag of Hollywood films such as Cinderella, Dead Again, Sleuth, Jack Ryan: Shadow Recruit, Murder on the Orient Express and, of course, Thor. If there is a pattern to his film work it’s that Branagh is at his best when he’s not directing himself.

This might account for why All Is True looks and feels like a cloying vanity project. Surely it would have been far more interesting for Branagh to cast somebody other than himself as the Bard, if for no other reason than to side-step the cosmically predictable. The same argument applies to Orient Express, which appeared to be a film about a man in love with his moustache.

The film was written by Ben Elton, the prolific and occasionally brilliant writer who also wrote the extremely clever and funny Upstart Crow, a sitcom about Shakespeare’s life at home and work. Odd as it seems, any episode of that show is more enlightening and entertaining than anything on offer here.

Produced by Keaton, it’s another film aimed at the mature-age demographic. The romp is gentle in nature, cheeky in tone thanks to nifty, high-key direction from Zara Hayes (who co-wrote the screenplay with Shane Atkinson) and is clearly determined to join all of Keaton’s other recent films – Something’s Gotta Give; 5 Flights Up; And So It Goes; Hampstead; Book Club – in presenting a polite yet resolute middle finger to those who stereotype the elderly.