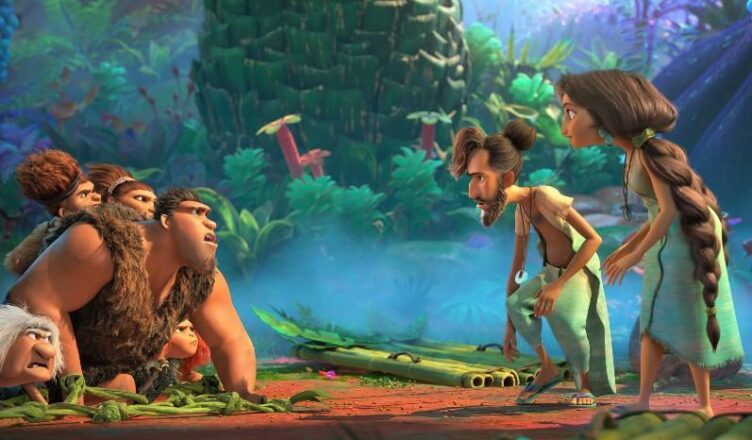 The next step: Cultures clash in a friendly way in ‘The Croods: A New Age’.

THE CROODS: A NEW AGE **** (96 minutes) PG
Prehistoric worlds collide in spectacular fashion when the wandering caveman clan the Croods stumble into the dapper world of the Bettermans, a brood of funky hipsters who represent the next step in human evolution.

Initially it seems as if the Croods have hit upon a well-tended, comprehensively walled-in paradise. In search of a better home and forever scrounging for food and shelter their nomadic lifestyle appears to come to a happy end.

They are welcomed and embraced by the ever-smiling Bettermans, who live in plenty thanks to their mastery of farming. And never mind caves, they live in a beautifully designed split-level home high in the trees that are full of Flintstones-like mod cons.

Things begin to fray when the Betterman’s daughter Dawn (Kelly Marie Tran) sees among the Croods her long-lost friend Guy (Ryan Reynolds) who is romantically involved with the sparky Eep Crood (Emma Stone), a young woman deeply in love.

For all their gleaming smiles and friendly manners, the Bettermans (voiced by Peter Dinklage and Leslie Mann) indulge in a bit of evolutionary bigotry by deciding that Guy, whose parents they once knew, really belongs with them.

Thus, they have the task of diplomatically persuading the Croods to move on, complete with travel hampers and best wishes and sincere hopes that they find the happy home they are looking for, so long as it isn’t anywhere near the Bettermans.

We haven’t seen a good class comedy in a long time, its heyday being way back in the 1970s, and what’s on offer here is a ripper that uses the “not in my backyard” mentality with great wit.

Indeed, the finesse with which the culture clash between the Croods and the Bettermans is handled makes The Croods: A New Age a vastly superior sequel to the fine, if sluggish 2013 original.

As a family film it hits just the right spots with multi-level gags, both verbal and visual, generously sprinkled across a strong, absolutely terrific and timely story about prejudice, class snobbery, over-parenting, male bonding and friendship.

The adventure even incorporates a conflict with a group of punch monkeys – one of many colourful prehistoric critters invented for the film – and a mega-dose of girl power, though thankfully any hyper-feminist fist-pumping is done in a sincere, semi-parodic manner, lest the film make the mistake of taking itself too seriously.

That said, the film’s congenial, soft-centred messaging about tolerance, reconciliation and learning to get on with those considered “the others” is nothing if not timely.

Given the present adversarial “us and them” culture that has thrived online, in the media and – lord help us – in comedy, a snappy Dreamworks animated feature reminding us to look beyond our differences and try a tad harder to get along might just cure the world. Or at least nudge it a millimetre or two in the right direction.

The Croods: A New Age is a highly engaging, energetic, wonderfully animated romp spiced by some great action sequences, with the very clever lacing of contemporary references and heavy use of pop songs – fans of The Partridge Family music are in for a treat – likely to make the film click with adults and date-movie audiences as well as with the target family demo.

In all, a thoroughly entertaining crowd-pleaser, no risk.