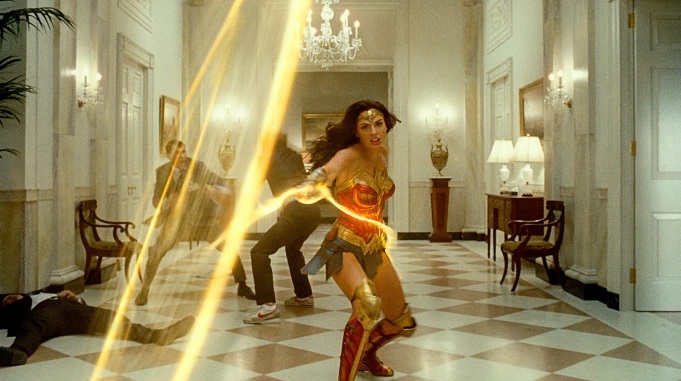 WONDER WOMAN 1984 ** (152 minutes) M
Too long, too silly, with weak action scenes and no real villain, Wonder Woman 1984 – aka WW84 – lands with a thud and an apparent determination to redefine big-screen superhero mediocrity.

Gal Gadot, somehow even more beautiful than she was in the tepid 2017 original, returns as Diana Prince. She’s working at the Smithsonian museum where she encounters nerdish, awkward co-worker Barbara (Kristen Wiig) and a magical crystal that can grant people their wishes, Aladdin’s lantern-style, only they don’t need to rub it.

Enter financially strapped TV spruiker Maxwell Lord (Pedro Pascal), who turns out to be the only genuinely interesting character in this two-and-a-half-hour $200 million bland out.

He’s on the skids until he finds out about the power of the stone, which he absorbs into his body, thus giving him the power to grant people wishes – but with a catch; each wish costs the wisher something important to them.

Doesn’t sound like too bad a premise, what with the Faustian overtones and the appeal to people’s greed that soon has the US president eating out of the hand of the maniacal Maxwell, whom Pascal imbues with an oily charm that gets increasingly crazed.

The power of the stone magically brings Diana’s boyfriend Steve (Chris Pine) back from the dead and grants Barbara her wish to be like Diana, who she clearly has a girl crush on.

Consequently, Barbara shakes off the bad hair and dowdy wardrobe, becoming self-confident and much more attractive to men. It’s exactly what Barbara wants, yet her transformation doesn’t end as she begins developing superpowers, just like Diana’s.

As Diana/Wonder Woman tries foiling Maxwell’s crusade to cause global chaos, Barbara confronts her in battle to protect him, resulting in some high-voltage cat-fights as Barbara becomes devoted adversary Cheetah.

There’s nothing in the component parts of WW84 that are faulty or misjudged; the film’s chief drag is that the direction is so monumentally uninteresting.

For all their flash and dazzle, the film’s few action sequences are unexciting and, in the case of a fire fight during a truck chase, unconvincing, even for a fantasy film.

Director Patty Jenkins, who directed WW1 and the 2003 Oscar-winner Monster also co-wrote the screenplay, yet she struggles to make the whole shebang really sing.

One of the things robbing the film of real punch appears to be this really odd decision against showing anyone getting really hurt or – Heaven forfend – killed during the action sequences. Look, if people are going to get thrown from moving trucks they’re going to get hurt, but Jenkins is at pains to show them doing a regulation safety roll as they hit the ground.

In one memorable, laughable moment during an elaborate indoor fight, we actually see Wonder Woman utilizing her superpowers to make sure that an anonymous security guard who has been flung across the room by the evil Barbara lands safely in a comfy chair rather than smashing against a wall.

It might sound like an attack of wokeness, and it might well be, yet the irony is that the climax of WW84 does claim a life, and anyone who has been following the broad themes of the film’s threadbare story will likely deem it as massively unfair, cruel and a bit hypocritical.

It certainly leaves a very sour after-taste for what is supposed to be a big slice of superhero waffle.

Not much is made of the 1984 setting apart from a few wet gags about fashion and the pacing of the film’s paper-thin plot is super sluggish.

The film opens well with an impressive action sequence featuring Diana as a young Amazon in a competition against her adult sisters. This is soon followed by a child-safety conscious Wonder Woman in action at a mall.

After that it takes more than an hour before we see Diana back in the WW costume. That’s due to a lot of laboured plot exposition in the service of a premise that is, ultimately, pretty silly.

Admittedly, Gal Gadot in 1984 women’s wear is very easy on the eye, especially in those scenes where she’s in a stunning full-length white dress with a side slit. Lovingly lit and thankfully shot on film, she’s certainly more stunning than any of the film’s sausage factory visual effects.

Still, though it hurts to say it, it would have been better to see fewer of these carefully composed beauty shots of Gadot (easily one of the most beautiful women on screen right now, no question) in the interests of better pacing, which would have spared us from the film’s inordinate two-and-a-half-hour running time.

That’s way too long for a wafer-thin, disposable piece of fluff like WW84.

And by the way, what ever happened to movie villains with guts and enterprise whose evil plans made us rejoice in their eventual demise? The so-called villain in WW84 barely qualifies as a bad guy.

OK, he rips a few people off with some bad investments and needs to spend more time with his kid but, well, he just doesn’t bring the nasty to the party. And that’s a pity because Pascal puts in a good performance suggesting he’s going to go further than he actually does.