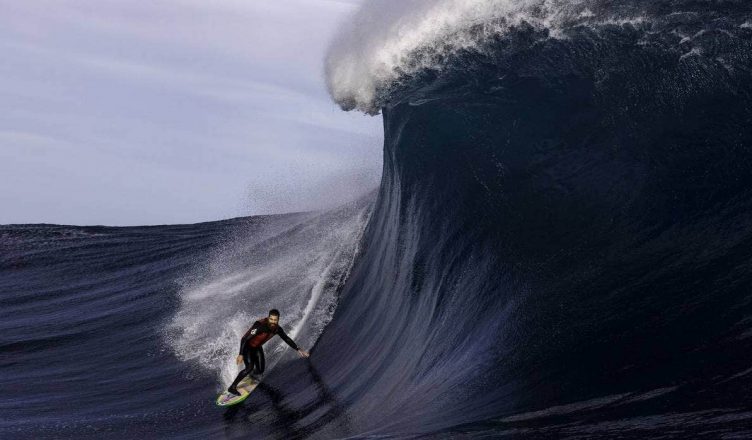 FACING MONSTERS ***1/2 (94 minutes) M
Definitely not your father’s surf movie, this. Director Bentley Dean (Tanna; A Sense of Self) helms an absorbing, visually jaw-dropping look into the life and mentality and Kerby Brown, a West Australian surfer who likes his waves large, angry and full of peril.

Some truly awesome footage by cinematographer Rick Rifici – with drone work from the film’s sound recordist Jeremy Ashton and on-the-water GoPro footage from Kerby’s brother Glenn – captures the scale and power of these waves.

Sometimes they look the way we’ve seen in countless surf movies, curling into themselves and forming beautiful tubes as the waves crest and fall. Often, however, they appear not as waves but as sheer cliffs of water that hang in the air momentarily before collapsing in on themselves with a devastating thunderous crash.

The film explores his motivation, casting him squarely as a traditional beach rebel who found in surfing a liberation from the strictures of a traditional work life, which he tried but couldn’t hack.

While the titular “monsters” refer to the giant waves that crash into select locales on the West Austrslaian coast, other monsters are faced, including Kerby Brown’s depression, and his addiction to drugs and alcohol.

With a family to care for, Kerby is aware of how his love of gratification through surfing puts both himself and them at risk. So when things go south for Kerby the film steps up to show the less noble side of the sport.

Implicitly, the film raises the same issue regarding thrill-seekers that came up in the recent film The Last Mountain.

While we admire adventurers for their bravery and skill, and feel sorry when things turn bad, how much sympathy do they truly deserve when the odds go against them?

As with the skydiver whose parachute fails to deploy, the danger-defying surfer who loses out against the giant wave they are riding find themselves in a plight of their own making.

The film is bookended by the injuries Kerby Brown sustained when he fell victim to the logic and gravity he so enjoyed defying.

Without pushing the issue, the film’s final stretch makes clear the distinction between adventure and folly, implicitly asking at what point does a thrill seeker become brave enough to say enough, realizing how the only thing that saved them from a death – or, worse, a life not worth living – is luck.

Director Bentley Dean took some time out to talk about the film, its making and how he came to do it. He also addresses the thorny issue regarding the thrill-seeker mentality.