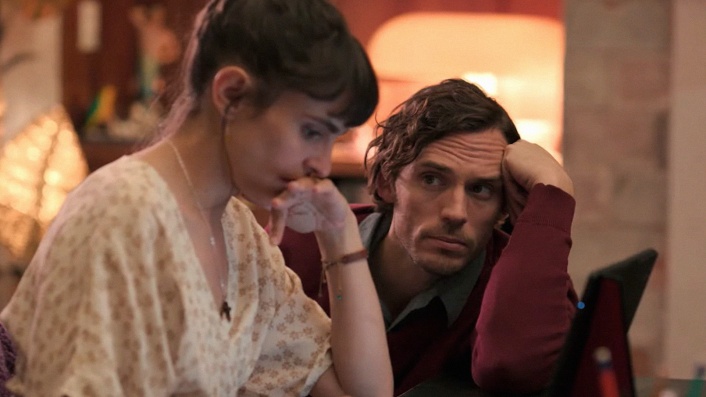 No spark: Verónica Echegui and Sam Claflin in the rom-com ‘Book of Love’

BOOK OF LOVE * (106 minutes) M
Looking and sounding like a rom-com Hugh Grant rejected – and that’s saying something – Book of Love is a dismally unfunny, unromantic rom-com with a perfectly OK premise that is shot down by terrible direction and two admittedly attractive leads with no discernible chemistry.

Struggling author Henry Copper (Sam Claflin from The Nightingale; also a producer) has a flop of a relationship book called ‘The Sensible Heart’ that booksellers can’t even give away.

As luck would have it, the Mexicans are hot for the book, which was translated by wannabe writer Maria Rodríguez (Verónica Echegui). So Henry’s full-of-beans agent Jen (Lucy Punch) sends him down to her for a book tour.

Turns out the reason the book is so big in Mexico is because Maria made some major changes without permission. Henry twigs to this, but it’s decided to go ahead and push the book anyway.

Now, in the alternate reality of Book of Love, which is set present day with heavy emphasis on the power and reach of social media, we are supposed to believe there’s not a single person who speaks English and Spanish who would pick up on the loose translation. That’s a big story hole to swallow.

But even if you do, you still have to deal with an ultra-predicable story and two lead performances that are as flat as week-old champagne. Claflin appears to be doing an impersonation of 1990s Hugh Grant (perhaps it’s intended as an homage) while Echegui does a pale, home-brand version of Penélope Cruz.

Even those who absolutely love the genre and are willing to forgive all in exchange for a bit of feel-good romantic whimsy might find the forced cuteness on offer here hard to endure.