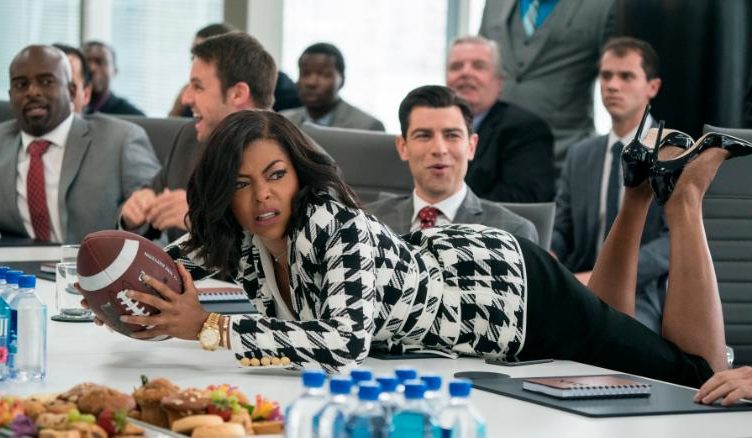 Going for Broke: Taraji P Henson is a non-stop delight in the very funny workplace comedy ‘What Men Want’.

Bummed out after failing to get a long hoped-for promotion, Ali parties hard with her friends, gets wasted, and wakes with the ability to read men’s minds.

Despite the film’s title, this power offers her only limited insight into men’s minds. It ends up having only limited use at work and in her relationship with a single father Will (Aldis Hodge). Most of the time she is a magnificent stumblebum and emotional mess, not above the odd moment of well-judged slapstick and prone to letting her mouth run off

With vending-machine precision, the film delivers some nifty messages about honesty and women in the modern workplace, though, to be fair, there’s thankfully nothing especially forced or “woke” about the film. Even the gay characters come off as loveable goofballs.

The film has popped onto the scene without any media previews, so this reviewer headed down to Highpoint to take in a 4pm screening with a couple of hundred other people. In a remarkable demonstration of how keyed-in the film is, they responded as one to all the verbal and visual gags, with one perfectly judged romantic line eliciting a collective gasp of appreciation.

Side note: A lot of write-ups of What Men Want describe it as a “gender swap” movie. No it isn’t. Ali doesn’t swap genders, she has the ability to read men’s minds. She is all woman, all of the time.

The so-called “gender swap” refers to the fact that a male (Mel Gibson) played the lead in What Women Want, the 2000 comedy on which What Men Want is very loosely based.

That does not qualify it a gender-swap movie. Switch, the 1991 Blake Edwards comedy with Ellen Barkin in which a man is turned into a woman, is an example of a gender swap movie. Just to be clear.

ESCAPE ROOM ***1/2 (100 minutes) M
A group of people are brought together by special invitation to partake in an elaborate “escape room” game. Together they must search for a clues in a series of rooms that will allow them entry into the next one before time runs out. After a short while, however, they discover that the game is lethal and that they’re at the mercy of a psycho.

OK, it’s not the most original concept for a thriller – the Saw films, My Little Eye and Hostel spring to mind – but the superb, stranglehold direction of Adam Robitel (Insidious; The Last Key) draws you in early and never lets go, even after you think things have been resolved.

With a no-name cast and a very low budget, Escape Room is the latest prime example of the economics of the horror genre. Serve the genre’s fanbase well, give them exactly what they want but in a slightly novel way and the world is yours. In this case, a puny $9 million film has turned over around $108m worldwide. That is a bigger return on investment than most blockbusters.

As with What Men Want, this film was not previewed to the media, so was seen at a public screening with normal people instead of critics. The reaction to every shock and turn in the story would have pleased the producers no end.

Directed by Robert Rodriguez and produced by James Cameron, the film is an origin tale of a wide-eyed anime character called Alita (played by a digitally enhanced Rosa Salazar), a female cyborg warrior who is salvaged from a junkyard by a robot-loving doctor (Christophe Waltz).

Cursed with amnesia, she discovers she has amazing fighting powers, which she deploys against the forces set out to destroy her.

Still, her over-sized eyes – a long-time staple of Japanese animation – speak of a vulnerable heart that immediately falls for a boy Hugo (Keean Johnson), with whom she wants to live in the luxurious sky city that floats above the congested squalor where they live.

Despite its reported $US170 million budget there is nothing visually arresting or inventive here, with much of the film looking like it was borrowed from other films such as District 9, Thor Ragnarok, Rollerball, Transformers, Blade Runner, AI, Terminator and many others.

That wouldn’t have been such a big deal, however, had the central story not been so lame. Stripped down, the relationship between Alita and Hugo is little more than a sappy, run-of-the-mill teen romance.

As a time killer, sure, Alita has enough B-grade dazzle and action to keep you from drifting off in thoughts about your grocery list. It’s just a pity the film can’t rise above being yet another throwaway spectacle.

It even throws away the potential of a strong female lead character who was herself thrown away. Anyone hoping for anything progressive will find the film’s final reel very disappointing.

Alita is also the latest example of 21st post-content cinema, where traditional story principles are largely turfed for visuals and sequel baiting. In Alita, we have a film comprised of two acts instead of three. To see the third, guess what? You have to see the sequel, dutifully pointed to at the end.

Oh, and the film is available in 3D, the format in which it was previewed. Save your money, folks. The difference is barely noticeable.

AT ETERNITY’S GATE ***1/2 (111 minutes) PG
The lonely, largely wretched latter life of tortured artist Vincent Van Gogh is brought to near-brilliant life here by artist Julian Schnabel, who has proved himself a fine filmmaker with works such as Before Night Falls, Basquiat and The Diving Bell and the Butterfly.

With rich, convincing lead performances by Willem Dafoe – so good he looks born to play the part – and Oscar Isaac (as Van Gogh’s close friend Paul Gauguin), the film breathes with a love of art and the toil it demands.

Working with brilliant French cinematographer Benoit Delhomme (Cyclo; The Proposition), the film is an ever-pleasing swirl of style, replete with overlapping images, voice tracks and shooting styles. As with other Van Gogh films – most notably 1956’s Lust for Life with Kirk Douglas – it shows Van Gogh’s deep love of a world that was largely hostile towards him. He was a truly sorry figure in the most dramatic sense, something At Eternity’s Gate captures splendidly.

HAPPY DEATH DAY 2U *** (100 minutes) M
Not only will this surprisingly inventive sequel please fans of the first film – basically a slasher version of Groundhog Day where a teen girl relives the day of her murder over and over – it might even win over those who weren’t so keen on it.

Eschewing the horror/slasher elements of the first film with sci-fi and comedy, we find poor Theresa (Jessica Rothe) again the victim of the repeating-day curse. The chief difference this time around is that she has a swag of nerds trying to help her break out of the time-loop with the aid of a contraption they’ve invented in their high school lab.

Director Chrisopher Landon (son of Michael, from Bonanza and Little House on the Prairie) brings a very cheeky vibe to this outing, including references to Back to the Future, though it should be noted the film’s suicide montage – echoing the one from Groundhog Day – might be upsetting to some.

IF BEALE STREET COULD TALK **1/2 (119 minutes) MA
Following up the unlikely Oscars triumph of Moonlight, writer/director Barry Jenkins delivers a beautifully photographed, non-linear period tale about love and injustice in a black neighbourhood in the 1970s.

Plans for a happy life between Tish (Kiki Layne) and Fonny (Stephan James) are turned upside down after an incident lands Fonny in jail.

Jenkins is an unhurried director who loves to dwell on intimate scenes and there are several touching moments as family tensions grow over a child conceived out of wedlock. The pace, however, does become somewhat cloying as the time-jumping has you thinking more about the timeline than the characters. Layne is impressive in her first major role.