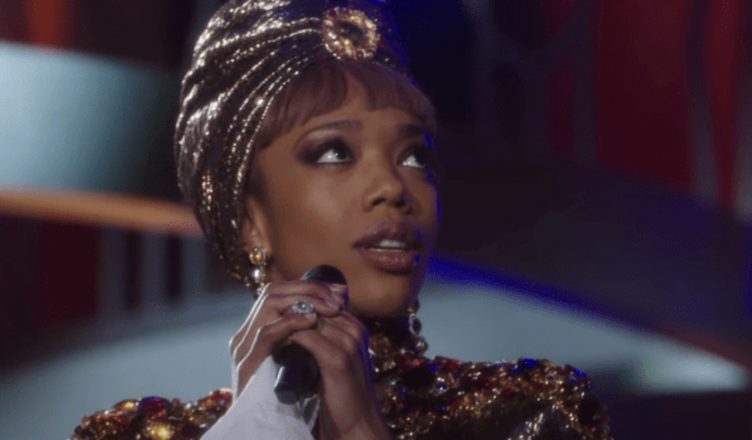 For fans: Naomi Ackie plays singer Whitney Houston in ‘I Wanna Dance With Somebody’.

WHITNEY HOUSTON: I WANNA DANCE WITH SOMEBODY *** (146 minutes M
If you’re after a lurid portrait detailing Whitney Houston’s tragic, drug-fuelled downslide from the history-making nosebleed fame she achieved as a black pop singer whose mass appeal crossed barriers, filled arenas and churned out more #1 singles than The Beatles, I Wanna Dance With Somebody will prove hugely disappointing.

A social-realist depiction of the meteoric rise and heart-breaking fall of Whitney Houston this is not.

Houston’s substance abuse and drinking are acknowledged in the film, but only fleetingly. Same with her physical decline and ultimate demise. Houston’s sad, accidental death – she drowned in a bathtub after a cocaine binge – is mentioned via caption only.

The emphasis here is on her phenomenal rise, her records, her music and her extraordinary singing voice.

It’s primarily a celebration designed to please fans, which is what you get with any biopic that heralds that dubious endorsement of being “authorized”.

We do get into Houston’s money troubles and the problems she had with her manager father John (Clarke Peters), but it’s always in terms of people taking advantage of her, building to a key scene where she puts her foot down in an attempt to take control of her life.

That issue is at the heart of the story. We see her selecting songs with her devoted, obedient producer Clive Davis (Stanley Tucci, absolutely terrific and sporting a very realistic combover), then see her being trashed for not being black enough, first in a radio interview, then by protesters calling her Whitney “Whitey” Houston.

Her pushback to the imposition of racial politics into her music and the presumption that she is obligated to promote an agenda because she is a woman of colour makes for the most pointed scenes in the film. Bravo.

The film also highlights how central her love for best friend Robyn Crawford (Nafessa Williams) was, especially in the face of demands for her to be seen with men.

Essentially, the film is glossy and fluffy with just enough grit to counter claims it ignores the darker parts of her life. It ticks a few “must mention” boxes but presents a largely sanitized portrait, minimizing Houston’s obvious faults and failings and dialling up her popular allure and formidable talent. This we see being lovingly nurtured by her mother Cissy (Tamara Tunie in a wonderful supporting turn).

The aim of I Wanna Dance With Somebody is clear – to invite those who already love Whitney to fall in love with her all over again. The film serves as validation and a valediction for the devoted, giving them a final encore and a formal farewell. What fan would not tear up at that?

On that score, I Wanna Dance With Somebody deserves congratulations for emphasizing the legend over the darker realities of Houston’s public and private life.

The hope remains, of course, that at some point another filmmaker will dare make a feature that reverses the emphasis.

The notion that Whitney Houston was a sort of show business martyr, an artist whose talent and passion were overwhelmed by the demons of success and fame, is also baked into the film’s portrait.

Just look at the Christ-like pose that adorns the film’s poster.

Footnote: Like many biopics, such as the Elton John film Rocketman, too much of the dialogue in I Wanna Dance With Somebody is preoccupied with cramming in research notes about facts and figures, which always sounds obvious and awkward. They need to be in there, sure, but there’s got to be a smoother way to do it.

The opening chapter brims with promise as we witness a model couple arguing at length over the paying of a restaurant bill. The attention to the nuance of gesture and language by noted Swedish writer/director Ruben Östlund (Force Majeure; The Square) is remarkable and carries over to the luxury cruise the couple joins.

But just at the point where the film hits its high – a storm turns a lush dinner into a rhapsody of vomiting – it also surrenders its between-the-lines potency as the alcoholic captain (Woody Harrelson) begins trading quips about socialism and capitalism with a rich guest.

By the time the cast wash up on a beach the film completes its descent with a mashing of Lord of the Flies and The Flight of the Phoenix. What a pity that something that started out so witty and dry should end up so witless and wet.