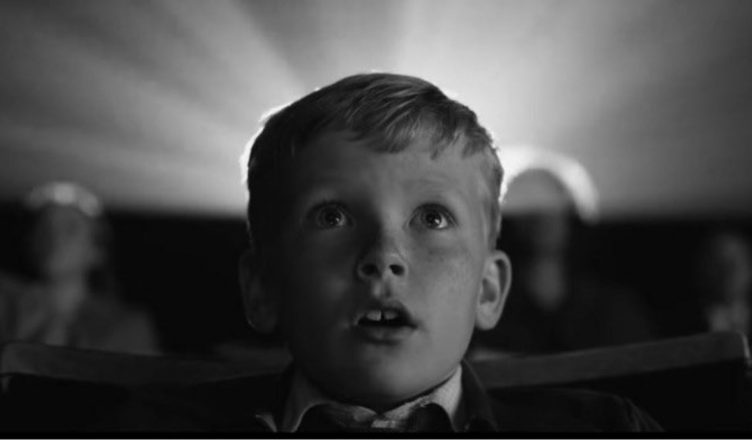 BELFAST ***1/2 (98 minutes) M
No account of life in Northern Ireland during The Troubles can sensibly avoid addressing the harsh realities of the complex conflict that tore apart communities and claimed the lives of thousands of innocent bystanders.

Yet writer/director Kenneth Branagh – in a career highlight topped only by the long version of his 1996 triumph Hamlet – bravely, wisely keeps his semi-biographical domestic drama based on his childhood circa 1969 from becoming mired in violence, politics and the divisions promoted by organized religion.

Framed by the conflict between Catholics and Protestants and filmed in evocative black-and-white, Belfast is a tough-yet-tender family story set largely in a working-class street that has been blockaded by angry young militants eager to oppress and expel the Catholic residents.

To nine-year old Buddy (Jude Hill), the big picture stuff remains largely in the background to the more pressing concerns of his daily life; playing with his mates; his infatuation with Catherine (Olive Tennant); and whether his family should remain in Belfast.

His parents are constantly at it. Danger flares all around them, yet it is offset to some degree by a strong non-sectarian sense of community that helps everyone cope with the uncertainty. While kids play in the street marches and looting can break out at any time.

Driving ther narrative is the growing tension, carefully built by Branagh, between Buddy’s Pa (Jamie Dornan) and Ma (Caitríona Balfe) over whether the family should take the brave step and leave or take the arguably braver step and stay.

With the travel involved in his job offering him the opportunity to relocate his family to the safety and financial security of London, Pa is keen to protect their children’s future by moving as soon as possible, a choice that will also free the family of ever-worsening debt.

Following the line of common sense, however, isn’t so easy as it collides with Ma’s emotional ties to the place. Going entails leaving other family members behind, including Buddy’s aged, wise-cracking grandparents (Judi Dench & Ciarán Hinds). Also, Buddy doesn’t want to leave his pals, or his crush.

While keeping strong focus on the family, which counters the divisive climate with buoyant, salty humour, Branagh never allows the larger situation to slip too far away.

In particular, the pressure and muted threats being brought to bear on Pa are dramatically piercing and realistically rendered. Here is a decent, hard-working man with no agenda trying to protect his family being continually harassed by local guerillas who consider fighting for their cause an honour no Protestant man should be allowed to refuse.

Though the film is more personal than political, Branagh makes no bones about the vicious idiocy of the religion-based violence threatening the community.

Careful not to overplay his hand, Branagh doesn’t delve too deeply into the grimy details, primarily keeping the focus on the religious clash between Protestant and Catholic zealots. He pays special attention to the hate speech spewed forth by the local priest from the church pew. It’s pungent stuff.

Branagh does overdo the music a tad. While it’s lovely to hear all that Van Morrison, did we really need the score from High Noon when two groups confront each other in the street?

Exercising a new strength, Branagh elicits a wonderful central performance from child actor Jude Hill; it’s some achievement, given how difficult it must be for a kid to carry a dramatic film.

There’s top work also from the rest of the cast, especially Caitrona Bailfe as Ma and Jamie Dornan, who’s hard to place as the lash-loving dude from 50 Shades.

It’s always a challenge to shoot a film in black-and-white, which can look gimmicky if not done properly and with purpose. Thankfully, Branagh and cinematographer Haris Zambarloukos (Venus; Thor; Locke; Denial; Eye in the Sky) use the format effectively and evocatively.

Oddly, the film is being commonly referred to as a comedy-drama. It’s not. There are certainly funny moments in the film, but there’s no scene in Belfast that could reasonably be described as comedy.

Make no mistake, Belfast is a touching, humanist drama, just one laced with earthy humour and an uplifting, defiant spirit that celebrates community and decries those who seek to destroy it.

Talk about a period film with a timely message.