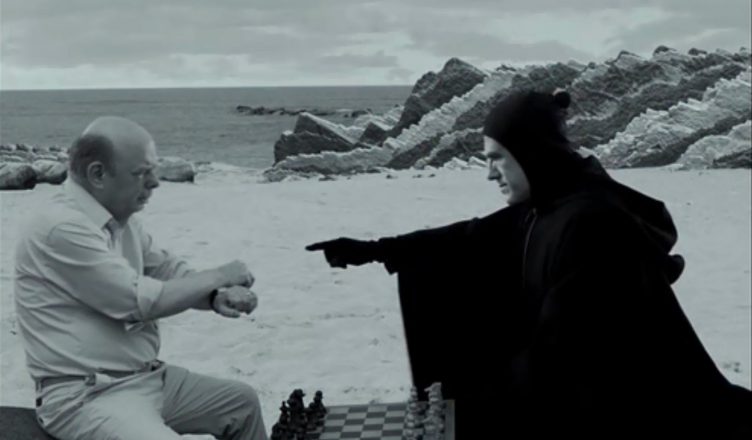 RIFKIN’S FESTIVAL *** (92 minutes) PG-13 (US rating)
Deep inside every seasoned, self-made curmudgeon is a soul looking for permission to enjoy life, meaningless though it might utterly turn out to be.

That’s the central riff of Rifkin’s Festival, a typically erudite, engaging, wit-laden offering from writer/director Woody Allen. He might not be at the peak of his powers here, but he’s close enough.

Breezily paced and blessed with gleaming, postcard-pretty cinematography – courtesy of long-time collaborator Vittorio Storaro – Rifkin’s Festival is a sweet-natured film that will certainly please Woody Allen fans and admirers as it revisits favourite themes about irrational love, unstable marriages, the ever-present fear of infidelity and, naturally, our deep love of movies.

With a happy, dearly missed career as a cinema studies teacher behind him, film critic, diehard cynic and borderline misanthrope Mort Rifkin (Wallace Shawn) is persuaded to leave the comforts of his New York abode and travel with his wife Sue (Gina Gershon) to the San Sebastian film festival.

There, she is doing publicity for a young director Philippe (Louis Garrel), whose new anti-war film has made him the hottest item on the circuit. While everybody buzzes about him and the film, Rifkin airily dismisses both.

Beautiful though the Spanish seaside surroundings are, it’s a bad time for the old grouch.

He misses his old job; he’s stuck writing a novel that has no end in sight; and Sue’s clear infatuation with her handsome, talented, popular young charge has him worried about all the time they are spending together promoting his film. Even at dinner she barely pays him any attention while fawning over Philippe.

On top of all this, he’s getting pains in the chest. On the advice of friends he goes to a local doctor Dr Jo Rojas (Elena Anaya) for a check up.

As it turns out, they have two things in common; a love of cinema and being trapped in a crumbling marriage, both charged with the suspicion their partners are cheating on them.

Rifkin’s amusing musings about the late-life crossroads he finds himself at are supplemented by wily black-and-white fantasy sequences. In these he finds himself haplessly cast in scenes from classic films such as Jules and Jim, Persona, Citizen Kane and Breathless.

Most memorably, and in Woody Allen’s umpteenth reference to his movie hero Ingmar Bergman, Rifkin finds himself on the beach in The Seventh Seal playing a game of open-air chess with Death (Christoph Waltz).

It’s a wonderful tête-à-tête as an off-the-shelf curmudgeon gets a spot of life coaching from the greatest curmudgeon of all. Death even advises Rifkin to lay off processed foods. Vintage Allen.

Sure, Rifkin’s Festival is not a premium Woody Allen film, but it ranks as a solid second-tier film, comfortably occupying a space on that shelf a few notches down from the one containing Allen’s best work.

These include such recent masterworks as Match Point Vicky Cristina Barcelona, Midnight in Paris, Blue Jasmine, To Rome With Love, the underrated Whatever Works and the gem that was Irrational Man.

Allen’s unparalleled knack for rousing the A-game from his players is again in evidence in Rifkin’s Festival, even in tiny roles.

Veteran Gina Gershon is a highlight as Sue, a professional woman on the verge of breaking up her marriage to someone she clearly loves, but whose deeply embedded cynicism now bores her.

As for Shawn, he is good and funny but, to be honest, he’s a tad stilted as Rifkin, delivering his lines at a pace that often doesn’t do justice to their wit. It’s still a strong performance, but one that seems stuck in second gear most of the time.

One of the reliable delights of any Woody Allen film, whatever tier they occupy, is the masterly manner in which exposition is delivered invisibly and economically through deftly sculpted dialogue exchanges that flow as though the actors are improvising.

His career-long flair for building scenes and moments by increments is a joy to behold in Rifkin’s Festival, and is perhaps one of the reasons why Woody Allen is still regularly tagged as one of America’s greatest living filmmakers.

Rifkin’s Festival might not be one of his greatest works, yet his finely honed skills as a director are there in almost every scene.

Footnote: Regrettably, much of the critical reception and discussion thus far about Rifkin’s Festival has been tainted by the resurrection of 30-year old allegations, all of which have been investigated and remain unproven.

It’s a sorry marker of today’s media culture that being deemed innocent of a charge serves merely to reinforce the initial accusation rather than dispel it.

Witness here a recent TV interview with Gina Gershon and Wallace Shawn, supposedly to discuss Rifkin’s Festival, but which is derailed from the get go.

One can only wonder at how history will eventually judge this anti-art movement where “cancel culture” seeks to cancel the very notions of fairness, due process and the presumption of innocence.

Always pushed by people with a political agenda, it’s sobering to note how the warped principles that drive “cancel culture” had a lot of traction in Germany in the 1930s, and in America in the 1940s and 1950s.

The 1976 Martin Ritt comedy-drama The Front, in which Woody Allen starred, gave a fairly accurate account of how the blacklisting of the McCarthy era worked.

The parallels with how today’s “cancel culture” operates is striking.

Back then the blacklist targeted those suspected of communism. The blacklist of “cancel culture” is aimed squarely at anyone who exercises free speech.

As with McCarthy’s blacklist, those who promote “cancel culture” are utterly indifferent to any innocent lives they destroy as they pursue their political agendas, adopting McCarthy’s creed that evidence is not necessary. Suspicion and allegation are enough.

Rifkin’s Festival was released on 28 January in select US cinemas and online. For streaming details, please go here.

There is no release date yet for Australia.