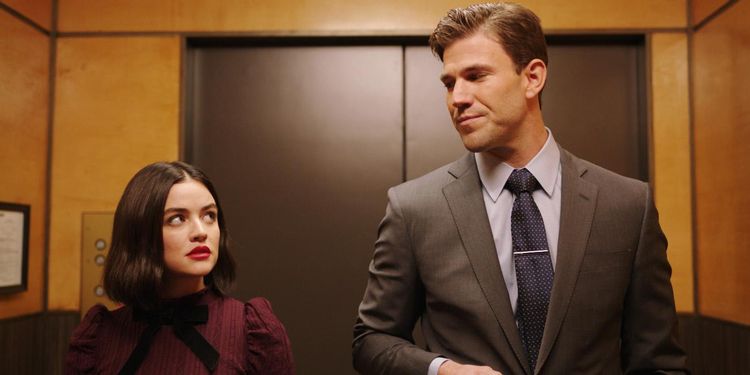 No spark: Lucy Hale and Austin Stowell star in the romantic comedy ‘The Hating Game’.

THE HATING GAME * (98 minutes) M
Don’t take this as gospel, but broadly speaking romantic comedies fall into one of three categories:

There are those rare, high-end rom-coms that set the standard (Annie Hall; When Harry Met Sally; 27 Dresses);

Then come your garden-variety rom-coms, the ones that follow the formula and do the job acceptably, if unexceptionally (all the ones by Reese Witherspoon, Julia Roberts, Sandra Bullock, Jennifer Aniston, Jennifer Lopez, Drew Barrymore, etc);

Then there are those rom-coms that hark from the Ninth Circle of Movie Hell, the ones that are so self-consciously cute they want to make you pull your own head off, usually within the first 15 minutes.

The Hating Game falls squarely into the third category.

Based on the novel by Sally Thorne, the film plays as though it sprung forth from the How to Make a Rom Com handbook, the workings of the formula so obvious, the characters so cardboard, the direction so bland it becomes almost intolerable.

Sitting directly opposite each other in the office of a newly merged publishing are Lucy Hutton (Lucy Hale from Pretty Little Liars) and Joshua Templeman (Austin Stowell).

Lucy is from the company that just got gobbled up, its focus on low-selling “quality” books making it vulnerable for a takeover by the bigger, more populist company, which Joshua represents.

His first job was to cut staff, which included most of Lucy’s friends, and instill fear into the remaining employees.

So there’s your meet-cute right there. They resent each other and argue constantly, often in front of colleagues.

Not a bad set-up on paper, perhaps. Trouble is neither of these people are remotely likeable, with Lucy being such a pea brain it hurts to think the film was made this far into the 21st century when women are, you know, meant to have a bit of respect for themselves.

There’s no sexual tension between the two. Why? Because Lucy comes right out and says it: Joshua is super-hot and she wants to boff him. So there’s no room for tension.

She even tries to “get inside his head” by dropping her usual workwear and turning up for work looking super sexy in a short skirt and high heels, then lying to him about having a hot date. And, of course, she’s flailing about the place as she does so, falling over, bumping her head, etc.

So here we have the rom-com cliché of a professional woman reduced to being a klutz over a man who really doesn’t care. It’s a spectacle of embarrassment that’s embarrassing to behold. Even male chauvinists will recoil at how sexist the film is. And it’s only just started. Things actually get worse.

For his part, Joshua is impossible to warm to. We’re supposed to feel sorry for him because he is just so super-attractive that the long procession of women he has bedded regard him as a one-night-stand kind of guy. Sex, sex, sex, but no love. The poor sod.

Woody Allen flagged this trope back in 1992 with Husbands and Wives. Yet here we sit, 30 years on, watching the cliché regurgitated yet again. At least 2011’s Crazy, Stupid, Love did something interesting with the idea. Nothing like that here.

But even if you overlook that, the film is infected with another brain-eating irritation: Joshua keeps referring to Lucy as “Shortcake”, a joke about how much taller he is than her.

And she takes it.

For crying out loud, people. After a warning not to say it again, any self-respecting woman would surely respond to any continued use of such a patronizing, infantilizing, demeaning term with a well-aimed knee to the groin.

But not Lucy. For her it’s a sign that this guy – who she refers to as having the physique of an Old Navy model – likes her. That’s all that matters.

Both these people are extremely attractive so, naturally, neither is partnered. There’s poor Lucy, alone in her spacious New York apartment, pretending to have a social life while she plays with Smurfs online. And, yes, she eats dinner straight from the can. And dreams of sex with Joshua.

It’s perfectly conceivable that in better hands this mess could have clicked.

Unfortunately, director Peter Hutchings (working off a screenplay by Christina Mengert) just can’t bring the proceedings to life. The comedy is forced, often painful to watch – sorry to see the marvelous Corbin Bernsen caught up in this – and the leads just can’t generate any romantic chemistry, chiefly on account of Lucy’s overriding desire to boff the beefcake.

While Hale noticeably tries hard with a pretty awful, thinly drawn character, the performance from Stowell (who produced the picture) is resolutely lacklustre. He’s all smarm, no charm.