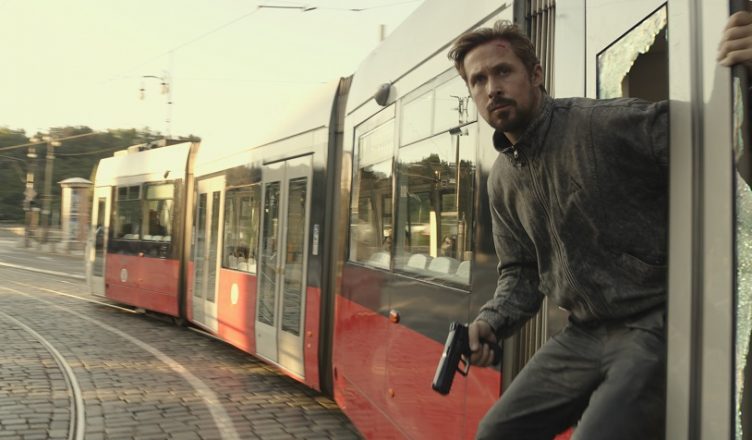 Tickets please: Ryan Gosling is all action in ‘The Gray Man’.

THE GRAY MAN ** (128 minutes) MA
A straight, stony-faced Ryan Gosling suits up as the perfunctory action lead in a watchable, if largely ho-hum and overlong action sprawl.

In a performance reminiscent of the Easter Island turn he phoned in for Drive, Gosling plays Six, a convicted killer recruited by a CIA officer (Billy Bob Thornton) to work as a hitman.

The foil-thin plot involves the acquisition of a USB containing damaging information that the annoying, wise-cracking Lloyd Hansen (Chris Evans) wants and is willing to kill and torture for.

Directed with cardboard proficiency by Joe & Anthony Russo (Marvel’s Winter Soldier; Civil War; Infinity War; Endgame), there are some very good drone aerials as well as some knockout action pieces: one sees the gradual disintegration of a military cargo plane; the other is an extended street chase involving twirling cars and a passenger tram.

As stand-alone sequences they’ve got a marvelously kinetic whiz-bang energy that is sadly missing from the rest of the film, with much of the action consisting of fireballs, tracer fire and exploding squibs.

Opposite Gosling’s taciturn killer is gun-happy comrade Dani Miranda (Ana de Armas), whose spirited performance provides such a contrast to Gosling’s deadpan schtick you have to wonder whether the casting might have been better – and definitely more interesting – the other way around.

Thornton is good as Six’s handler and kudos to child actor Julia Butters who plays his niece. Most will remember her playing the child actress in Quentin Tarantino’s Once Upon a Time in Hollywood.

Unfortunately, the performance by Chris Evans as the main villain of the piece is a complete wash out, his attempt at playing lethality with levity missing the mark so widely it renews your appreciation for how spot-on Alan Rickman was with his portrayal of Hans Gruber in 1988’s Die Hard.

A lot of screen time is devoted to Evans’ jocular sadist, yet the intended scene-stealing performance is so wince-worthy and off-key it makes you feel the pain he inflicts on some of his victims. It’s dreadful.

Also, much has been made about how The Gray Man is the most expensive film yet made by Netflix, its widely reported budget supposedly being in the neighbourhood of $US200 million.

Sorry, but without pretending to be a production accountant The Gray Man does not look like a $200m film, even factoring in all the impressive locations and the VFX-enhanced action.

If that is what the film actually did cost, one has to wonder where the other $US100 million went.

And what’s with the length? There’s nothing in here that warrants a two hour-plus running time, especially given how threadbare the plot is. Why did it have to run a second over 100 minutes? It’s a lesson Hollywood sorely needs to reteach itself.