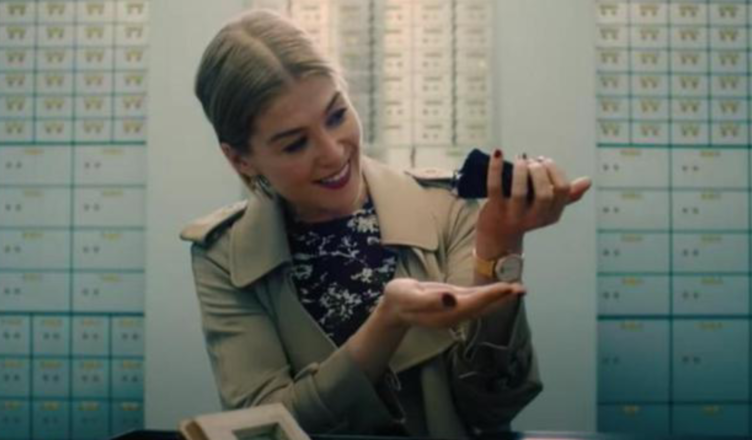 Pay dirt: Rosamund Pike plays the embodiment of greed in I Care A Lot.

I CARE A LOT ***1/2 (118 minutes) MA
As a pathological capitalist whose soul-deep devotion to greed would make Gordon Gekko run up a tree, Rosamund Pike puts in a searing performance as ice queen Marla Grayson, a heartless, high-IQ money grubbing confidence trickster who rudely discovers her latest victim might have connections who are even more ruthless than she is.

As far as scams go, Grayson has devised a beauty, chiefly because, technically, it’s not a scam.

Using a combination of legal mechanisms she is able to get the court to make her the legal guardian of asset-rich old people, each carefully selected with the help of a doctor whose ethics were flushed down the same drain as Marla’s.

Putting these elderly folk in plush, securely locked care facilities, Marla proceeds to officially liquidate their possessions under the pretense of raising funds to care for her charges and with the full backing of the law.

As far as movie schemes go, Marla’s is devilishly devious, water-tight and fool-proof.

That is, until she happens upon Jennifer Peterson (Dianne Weist), a happy, healthy, independently wealthy single woman living a comfortable and contended life in a leafy suburb who Marla literally wrenches from her kitchen and into a prison-like care home.

She certainly appears helpless, at first anyway, before Marla gets signals she might have bitten off more than she can swallow without choking. Could this old biddy possibly be a bigger danger than she is?

The build-up of tension is masterfully handled by writer/director J Blakeson (The Disappearance of Alice Creed; The 5th Wave) who sets up Grayson as a wholly detestable bitch before slowly introducing her potential nemesis in Roman Lunyov (Peter Dinklage), a violent criminal who is as devoted to revenge as Marla is to money.

Playing out much more as a dramatic thriller soaked in irony than as a black comedy, I Care A Lot deliberately wreaks havoc on your conscience as you find yourself identifying with some truly loathsome individuals.

The deftly massaged anticipation that Marla will get the comeuppance she deserves is darkly pleasurable, but it doesn’t really qualify as the form of humour that qualifies as black comedy.

Having distinguished herself in Jack Reacher, Made in Dagenham and most notably in the trashy classic Gone Girl, Pike is marvellous as Marla, a woman whose instinct for turning on synthetic compassion is so convincing it can boil the blood to behold.

And she knows it, at one point defending herself as nothing more than the embodiment of the American Dream, a brutally honest reflection of what it takes to make it.

Pike’s sharply observed performance is clearly the centrepiece here – kudos to whomever made the decision to have Marla’s Hitchcock-blonde hair cut so geometrically straight – she is enabled by great work from A-grade supporting players.

As her evil, bitch-in-training partner Fran, Mexican actress Eiza González is a study in amorality; a largely stone-faced Peter Dinklage makes an effective thug with unbreakable resolve; there’s even a wonderfully oily performance from noted character actor Chris Messina (Argo; Birds of Prey; The Secrets We Keep) as a mob lawyer.

But it’s the memorable work by Dianne Weist as Marla’s latest – and possibly last – victim that puts an extra dose of venom into the film’s tail. She goes from being a blindsided lamb all set for financial slaughter to an adversary with a sly smile that says “you’ll be getting yours”.

That’s captured in unnerving close-up, a technique deployed with distinctive edge by Blakeson, who clearly likes to keep his camera focused on faces as they reveal the truth behind them.