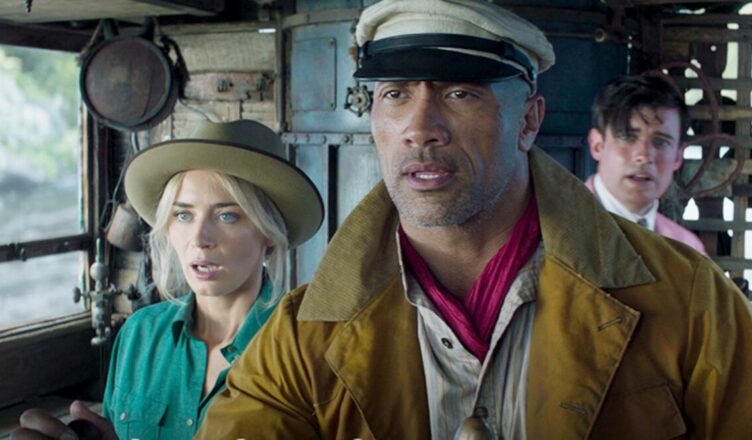 JUNGLE CRUISE ***1/2 (127 minutes) M
At a time when we’re all rather weary of $200 million post-content movies that are so forgettable they barely register on a single memory cell the arrival of Jungle Cruise warrants a warm welcome, maybe even a hug, as it merrily chugs onto our screens.

Strewn with the A+ production values that have long been studio standard, Disney’s latest four-quadrant crowd pleaser has the distinction of boasting a triad of refreshing, funny, even touching lead performances from action man Dwayne Johnson, British actor/comedian Jack Whitehall and the usually dour Emily Blunt, a dramatic actress who is so comically adroit here it comes as a something of a shock.

Bouncing off each other with an ease not often seen in films of such scale, they generate a pleasant, odd-trio chemistry that makes the film sing – figuratively, not literally (thank God) – with just enough heart to balance all the mayhem and satisfy even the most restless family audience.

Set during the first World War we meet Dr Lily Houghton (Blunt) and McGregor Houghton (Whitehall), a sister and brother team who defy official disapproval and head down to the wilds of the Amazon.

They’re in search of a mythologized tree that sprouts a flower with super healing powers that Lily believes will help medical science.

Posh to a fault, McGregor is not so gung-ho about swapping the comforts of civilization for the perils of an unsanctioned river journey through a tangled jungle of untold dangers, but he’s an unusually supportive brother obligated to his feisty sister’s progressive, proto-feminist spirit.

At a remote port they secure the questionable services of Frank Wolff (Johnson), a pun-loving tearaway who captains an attractively bedraggled boat that takes over-dressed tourists on cheesy river tours that involve a host of cheap thrills, including attacks from collaborators dressed as angry natives.

Luscious and lavish to behold, Jungle Cruise is served up with that trademark Disney gloss and attention to detail that suggests cost was not an issue.

Its huge scale notwithstanding, the film does feature a few too many seen-them-before visual effect sequences and way too much screen time spent in barely-lit environs. When will big action films dispense with this 21st century cliche?

Still, director Jaume Collet-Serra moves the enterprise along at a frisky clip and with a dutiful efficiency that includes a neat timelapse segment and some gasp-worthy action – no surprise given his CV includes helming such punched-out Liam Neeson numbers as Unknown, Non-Stop, Run All Night and The Commuter, as well as the terrific mini-Jaws thriller The Shallows.

His real achievement, though, is giving the over-sized shebang some body by allowing the three lead performances to really breathe; much of their engaging interplay feels improvised as they grapple with danger and with each other.

Determined in her quest, Lily has trust issues with Frank, who appears to be both a shyster and a pathological liar. Her suspicion of him studs the film with some terrific moments that enrich their growing relationship the further down the twisted river they go.

As for their on-screen chemistry, it’s so strong and fun to watch it’s almost palpable. Older viewers might even sense echoes of Humphrey Bogart and Katherine Hepburn in The African Queen. (To those who don’t know the film, go to the back of the class now.)

Meantime, poor McGregor lives in constant fear of being eaten alive by the jungle in general and by Proxima, Frank’s toothy pet leopard in particular.

Shaken from his prim existence, McGregor makes an intriguing asset to the film as he faces the thorny truth about the source of his fear: is it solely because of the scary environment or might it also signal a deep-seated cowardice about confronting who he really is.

It’s a very well-etched character arc, deftly woven into the plot and easily as enjoyable and involving as the sparks that fly between Lily and Frank.

Regrettably, the film is guilty of wasting the marvellous Paul Giamatti in a comparatively minor role as the well-dressed head of the tour company Frank works for. One wonders how he would have fared playing the film’s villain Prince Joachim, a richly accented German also in pursuit of the mythical flower.

That’s certainly no diss to the wonderfully hammy work by Jesse Plemons, a fabulous character actor (Friday Night Lights; Judas and the Black Messiah) who plays the nasty Prince like a variation of Hans Landa from Inglourious Basterds – though Christoph Waltz was never presented with the challenge of conversing with a bee and making it look believable.

Of the film’s vast array of visual effects major kudos must go to the VFX team responsible for the sleek photo-realism Proxima, Frank’s computer-generated wildcat pet.

We can wax nostalgic about how in the pre-digital age such a role would have been played by a real animal, yet we must concede how a digitally conjured creature will do exactly what’s required, won’t cost anything to feed or train, and can’t eat any of the crew.

The film is screening at cinemas as well as on Disney+, for an additional fee.

Having seen Jungle Cruise in both formats there’s no escaping the need to once again make the admittedly tedious, yet important plea to see the film on the biggest screen you can. It’s the format for which it was primarily – and so obviously – intended.

Everything just pops when it’s bigger.