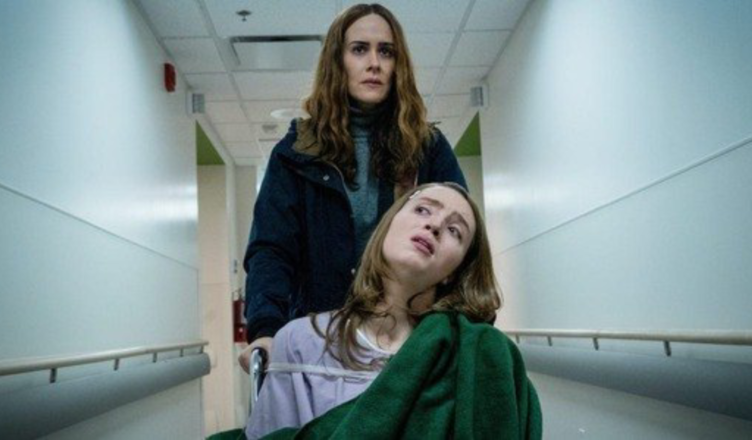 RUN **** (89 minutes) MA
What a marvellously executed, throat-tightening treat there is here for anyone with a love for suspense, plot-pivoting surprises and unhinged movie mothers whose maternal instincts just don’t know when to quit.

What could have been a throwaway piece of B-grade schlock is elevated to an A-grade armrest-clutcher thanks to a chilling premise, superb direction in the tradition of Alfred Hitchcock and a lead performance from Kiera Allen that is an absolute pearler.

Living with an array of medications to deal with her many maladies, including paraplegia that confines her to a wheelchair, is the unfortunate Chloe (Allen), a cloistered teenager eager to break free from her house and from her doting, ever-loving mother Diane (veteran Sarah Paulson from Ratched, drastically de-beautified).

There’s no question Diane loves Chloe, but her dedication to protecting her from the evils of the world includes depriving her of formal schooling, a phone and internet access.

For Chloe, the golden ticket to a better life rests on getting into college, so each mail delivery by the local postman brings with it the hope of domestic salvation.

What a total knockout we’ve got here.

Set in the dankness of rural Seattle, an American state that seems to be in perpetual winter where movies are concerned, director Aneesh Chaganty – who gave us the ripping 2018 thriller Searching (he also co-wrote Run with producer Sev Ohanian) – wastes no time setting up Chloe’s predicament as the film keys into the claustrophobic trapped-in-a-house wavelength of such locked-in classics as Misery, Rear Window and Whatever Happened to Baby Jane?.

Providing the film’s centre of gravity is the fantastically frantic performance by Kiera Allen (who has paraplegia). In a fairly stunning screen debut, she registers the increasing horror of her situation with a range of thoroughly appropriate facial expressions, many of which involve her eyes almost popping out of their sockets. It’s a prime example of a breakthrough performance. Even Ellen liked it.

As for Sarah Paulson, no mad-movie-mother trope escapes her unnerving portrayal as she mixes smother love with a good deal of cheese.

In an era where so many genre films ar4e defused by cliches, Run chimes in as a terrifically nimble, low-budget thriller that’s full of left turns and killer moments that are so ingeniously thought though they deserve their own awards category.

Note, for instance, how Chloe deals with the obstacle of a locked window. It’s the kind of attention to detail you only get with films that both respects your intelligence and knows how to keep your attention galvanized to our heroine’s ever-tightening plight.

Footnote 1:Though there have been many films to feature a main character in a wheelchair, Run has the distinction of being the first film to have a paraplegic actor as a lead since Susan Peters (whose personal story is truly heart-breaking) headlined the 1948 noir film The Sign of the Ram. That’s 70 years and change between drinks.

Footnote 2: Run broke viewing records when it premiered on Hulu in November 2020, having been deprived of a scheduled cinema release thanks to Covid.

HORIZON LINE **1/2 (90 minutes) MA
While on their way to a swish wedding on a tropical island two former lovers find themselves in a pickle on a small plane after its pilot conks out, leaving them stranded 20,000 feet above a very large ocean and surrounded by angry storm clouds.

With only intermittent communication with the nearest airport, Sara (Allison Williams; Girls; Get Out) and Jackson (Alexander Dreymon) try taking control of the increasingly troubled aircraft, which has problems with fuel, gauges and an uncooperative auto pilot.

Hobbled by some very ordinary direction from Mikael Marcimain, Horizon Line so clearly wants to be a tense, plane-in-peril white-knuckle ride but is let down by performances of wavering conviction, some awful dialogue – do people in stricken planes really speak like this? – and some aerial hijinks that are increasingly ridiculous.

Still, got to admit the more outlandish the film gets, the more fun it is to watch, with the finale being positively laughable, yet in a sweet way that suggests how, despite all the high-flying silliness, we really do care for these two stranded souls.

THINGS HEARD & SEEN ** (120 minutes) MA
In a rambling, unsatisfying, largely aimless semi-supernatural domestic drama, ambitious academic George (James Naughton) and his silly wife Catherine (Amanda Seyfried) move with their four year-old from their socially vibrant New York abode to a small upstate college town and into a strange house with a dark past.

The place is slightly spooky, what with a ghost still living there and things moving about on their own – but it’s a very peculiar, humdrum kind of haunting that never has anyone screaming: “This house is haunted! Let’s get out of here!”

While Catherine mourns over her sudden lack of a social life we slowly discover what an opportunistic rat she’s married to as he scopes out the local talent at the library and ingratiates himself with his students.

Writer/directors Shari Springer Berman and Robert Pulcini are best known for the wonderful 2003 film American Splendour, and that’s unlikely to change given how they can’t seem to decide which direction to take their meandering story as it delves into the spirit world, academia, infidelity, domestic abuse and the dangers of taking fishing trips with people with violent tendencies.

Based on the book All Things Cease to Appear by Elizabeth Brundage, Things Seen & Heard is a truly half-baked affair that wastes an obviously talented cast including veteran F Murray Abraham (Amadeus; Scarface; Mighty Aphrodite), who still manages to remind us what a great actor he is with a meaty supporting performance that gleams above all else.