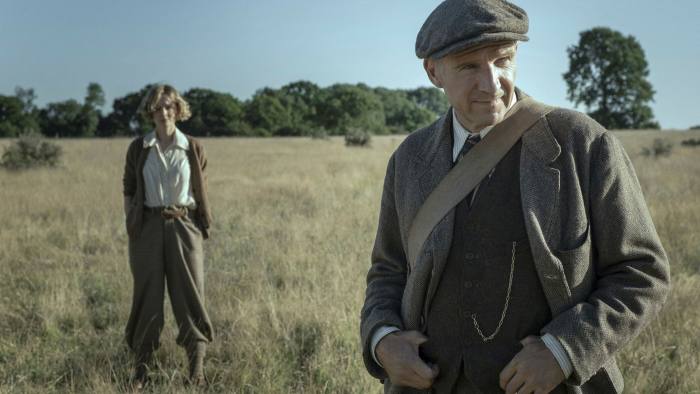 THE DIG **** (113 minutes) PG
A rich array of subdued performances and exceptional handheld cinematography grace a delicately woven British period piece from Australian director Simon Stone (The Daughter), who imbues the fact-based story with a love of nuance and a subtle sureness of touch.

Set in the days leading up to the outbreak of World War II on the photogenic fields of Suffolk, the beautiful but frail Edith Pretty (Carey Mulligan) hires veteran local excavator Basil Brown (Ralph Fiennes) to examine the ancient burial mounds on her sweeping property.

After a worrying start – these were the days before Occupational Health & Safety was a thing – one of the mounds slowly begins giving up its secrets as Brown carefully digs away. Validating Pretty’s initial instincts, Brown uncovers the barely preserved remnants of a burial ship.

The site becomes the envy of establishment archaeologists and is brusquely taken over by the British Museum, though efforts to remove Brown fail thanks to Pretty’s protests.

The ship’s discovery prompt a series of moving musings about fragility and transience, with Pretty’s son Robert (Archie Barnes) increasingly frustrated by his helplessness in the face of his mother’s decline.

Keying in to the film’s theme of loss and impermanence is a very well-knit side story as Peggy Piggott (Lily James), a young archaeologist brought to the scene with her rather repressed husband Stuart (Ben Chaplin), feels her marriage rapidly fading into passionless mediocrity.

Written by Moira Buffini (Viceroy’s House; Tamara Drew; Jane Eyre) from the book by John Preston, the film does a great job capturing the anxiety of the impending war; as ominous news reports fill the air and formations of Spitfires dart across the sky, Pretty’s cousin Rory (Johnny Flynn) hopes to literally grab what could be his final romantic experience before being sent off to fight.

Performance-wise The Dig is testament to the virtues of understated acting. As Brown, Fiennes is fabulous as the crusty old geezer full of heart and rustic pride, his bonding with the eager young Robert proving especially affecting.

Several light years away from her cheesy exploits in Promising Young Woman, Mulligan is at her most refined here, playing Edith Pretty as a cultured, compassionate woman for whom the metaphor-loaded excavation provides a connection between her tragic past and uncertain future.

Brimming with atmosphere, the evocative, cinematography by Mike Eley is largely hand-held, steadily tracking across the fields with the characters and placing us right in their midst.

Simon Stone has done a sterling job with his second feature, a finely observed film made up of small, touching moments, driven chiefly by the characters and the distant rumble of an approaching storm.

It’s as though the discovery at the heart of The Dig offers them one final embrace of normal, civilized life before it gets swept up by the far-reaching tides of war.