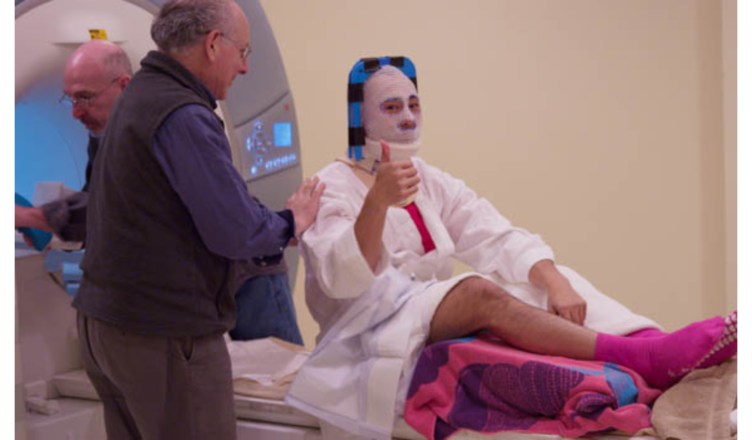 Into the abyss: director Alex Liu enters an MRI machine in his documentary ‘A Sexplanation’.

A SEXPLANATION ***1/2 (80 minutes)
If you’re going to examine the role sex education should play in the lives of young people, why not do it with a wink and a laugh? And why not be honest about your own hang ups as a point of entry to such a wide-ranging topic?

That’s the refreshing approach independent American director Alex Liu takes to the remarkably vexed issue of sex education in America, which he exposes as being in such a parlous state it’s a wonder teenagers don’t get assigned their own taxpayer-funded psychiatrist once they hit puberty.

Driven by a strong desire to work through his own deep-seated Catholic guilt over his gay sexuality, Liu faces the subject with admirable clarity and verve; he interviews experts, commentators and politicians to help him understand why a perfectly healthy, sexually active 36 year old man still manages to be riddled with self-doubt.

Slickly produced, A Sexplanation is a fine example of how to do subjective documentary properly.

Stating his agenda clearly at the beginning of his journey, Liu judiciously keeps an open mind, happy to give voice to opinions he disagrees with and to challenge his own prejudices.

One especially memorable encounter sees him taking all his Catholic baggage to an interview with an old-school priest; what Liu hears almost melts his mind – and he admits it with what seems to be visible relief as the fears he had held on to for so long appear to evaporate on camera.

Similarly, while attending an abortion rally, he gives fair coverage to those in the anti-abortion rally. He’s respectful, never talks across them, doesn’t make any jibes in the voiceover.

Most memorable is when discussing the issue of internet pornography with Utah Republican Senator Todd Weiler, who supported the push for pornography to be officially regarded as a public health crisis. Liu is clearly at odds with his interlocutor, yet gives him the time and space to make his points, the chief one being about the protection of kids.

The ready availability of pornography is an issue the film explores at some length, with emphasis on the damage it can inflict on those who turn to it as their prime source of sex education.

Nothing wrong with a bit of self-administered joy in front of the screen, say many of Liu’s experts, but without the context of proper, consistent schooling about sex, pornography can warp expectations.

In his exploratory chats, Liu finds the phrase “comprehensive sex education” popping up almost every time he asks for a remedy to America’s confused attitudes to sex.

Ideas are sprinkled throughout the film as to what form this could take, though the inevitable difficulty over whether one scheme could work universally is side-stepped.

Liu loves illustrating his points, so there are lots of images of genitalia peppered throughout the film. Some might find this a little confronting but, really, there’s nothing here that a reasonably open-minded adult should find too distressing.

And you certainly can’t fault Alex Liu for his commitment to the concept of first-person documentary as he is wired up and slid into a magnetic resonance imaging (MRI) machine. His mission: to rub one out in the name of science.

For more information, links and details about screenings visit the film’s website here.

A Sexplanation is screening as part of the Queer Screen Film Festival, which runs until Sunday 26 September. For tickets and info go here.