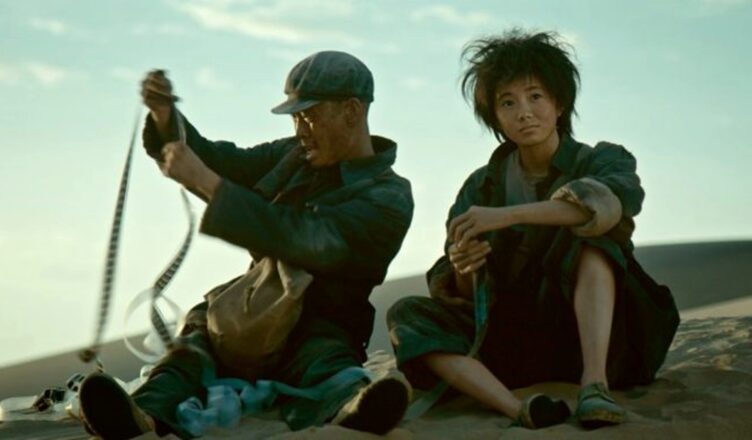 For the love of film: a fugitive and an orphan girl team up in Zhang Yimou’s ‘One Second’.

ONE SECOND ***1/2 (104 minutes; subtitled) M
In a marvelous film about film, China’s best, most Western-friendly director Zhang Yimou offers up a beautifully photographed gem that is both a touching ode to cinema and a caustic backhander to Communism.

Set in 1975 during China’s Cultural Revolution, a nameless prison camp escapee (Zhang Yi) is in search of a newsreel that is touring the Chinese outlands with a 1964 propaganda film bearing the thunderous title Heroic Sons and Daughters.

His motive is emotionally charged, for within the newsreel is, he has been told and fervently believes, a very brief shot of his beloved yet estranged daughter.

Though he manages to locate the film reel in a small village, orphan girl Liu (Liu Haocun) nicks it, igniting a farily amusing chase of sorts through the sweeping sand dunes leading to the next remote population centre where the film is to be screened.

An odd-couple bond forms between the two, though Liu remains wary of the “bad element” she has fallen in with.

An amusing tragedy strikes when the local projectionist, a devout party man known to the locals as Mr. Movie (Fan Wei), finds that one of the reels has unspooled and is now covered in dust and grime.

So the townsfolk, all conditioned to eagerly consume any strip of propaganda that comes their way, come together to painstakingly restore the damaged film.

The spirit of 1988’s Cinema Paradiso runs through the film’s commentary about the power of cinema; the shots of people carefully wiping and fanning dry the unfurled strip of celluloid have a rough beauty extolling the love and reverence for film.

That the film they are so meticulously restoring is mere Communist bumph pumped out by Party HQ is soundly undercut by the irony that the main character’s only motive in helping get the film fixed is totally personal.

He’s not interested in absorbing any message from the regime that locked him away and ruined his life; he wants to glimpse his daughter and reconnect with her, a purpose for which the film was not intended.

It’s a story device that works exceedingly well as we see the large hall where the film is to be shown. It’s so crowded with hundreds of people they’re crammed up the back and packed into the concrete gaps where windows should be.

Yet the crowd’s perception of what is to be screened is not the point of the story. The promise of a momentary glimpse of the daughter is.

There’s also the sense in these scenes that Zhang Yimou is contrasting the preciousness with which the restored film strip is treated with the ubiquity of digital film, which can be duplicated and deleted so readily. It’s a nostalgic nod that clicks.

One Second easily ranks as one of Zhang Yimou’s most humane and touching films, echoing such classics as Red Sorghum, Raise the Red Lantern and To Live (a truly wonderful film). It’s not quite up there with the great works of Not One Less or The Road Home, but it’s in that league.

It’s also great to see Zhang back in the cinematic territory where his subtlety, distinctive style and love of ordinary people can flourish.

His post-millennial ventures into big, digitally enhanced action films saw him slip into the swamp of bland, mass-market movies, demonstrating again how VFX-driven epics tend to file the edges off a director’s signature style.

Watch such films as Hero, House of Flying Daggers, Curse of the Golden Flower and, of course, The Great Wall (that monster movie he made with Matt Damon) and you’d be hard-pressed to peg them as Zhang Yimou films had you not known he’d made them.

One Second comes to us two years after it was made, and with a bit of political controversy.

The story goes that just before it was due to screen at the prestigious 69th Berlinale Film Festival competition in February 2019 One Second was summarily wrenched from the schedule.

This was allegedly due to “technical difficulties encountered during post-production”, an odd explanation for the Festival to proffer given the film was completed and ready to roll.

The excuse was promptly decoded as “The Chinese Communist Party doesn’t much like what this film is saying about its wonderful system of government”.

Consequently – again, according to reports – word has it that the film has been “toned down” in its criticisms of Communism, including reshoots and the addition of the closing sequence, which is set two years later.

Here’s the thing: if the film has been subject to official censorship to shine up the legacy of the Cultural Revolution – it sticks out like a sore thumb in the closing stanza when one young official quips of how much things have improved in China – the censors haven’t been very thorough.

The film still unspools as a spirited work critical of Communism, echoing Zhang’s great 1994 film To Live, which touched such a nerve it managed to get banned in China. (At the time, anyhow. It’s now available there online.)

It might be a stretch to suggest this, but the fact that Zhang can still get terrific films such as One Second released into the global market despite resisting official pressure to toe the line for decades attests to what a truly great and brave artist he is.

And in an odd way, that the regime, for all its ideological oversight, allows the film out at all might suggest that things in China are slowly loosening up, at least when it comes to art.