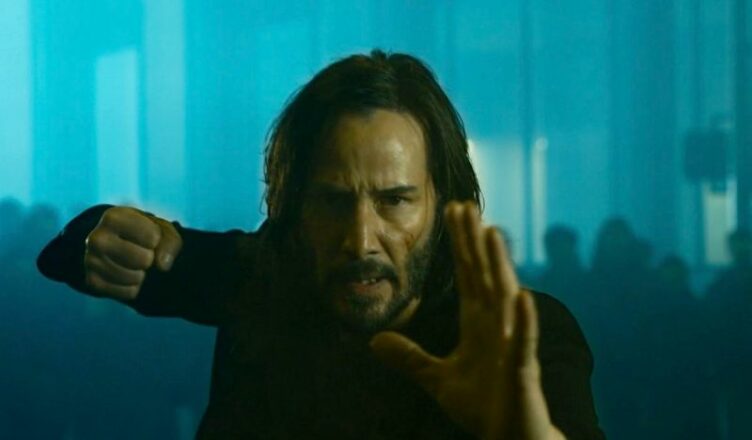 Come into my world – again: Keanu Reeves returns in ‘The Matrix Resurrections’.

And there you have it, folks: the film that reviewed itself. How very meta.

The quip is not just a wholly accurate summation of the most disappointing film event of 2021, it is totally in keeping with all the clever-clever self-references crammed into the opening spool.

Having supposedly clocked out in 2003’s Matrix Revolutions, we are reacquainted with our taciturn anti-hero Neo (a lightly bearded Keanu Reeves), now known as Thomas Anderson, a computer game designer whose Matrix game trilogy was such a success his company is prepping for a long-awaited fourth installment.

Thus the barn door swings open to a cascade of smarty-smart, semi-amusing japes about the Matrix legacy and the dangers of doing a fourth instalment.

Jokes about reboots, remakes, retreads bounce around like a pinball, stressing the onus of any new film to deliver something fresh and exciting.

They’re intended by director Lana Wachowski and her team as comforting winks to the audience, reassuring us that they know all about the weight of expectations and the disease of sequelitis, that all-too-common movie syndrome where a follow up is a pale imitation of what came before.

Alas – and with a great sinking of the heart – Matrix Resurrections turns out to be all promise, no pay-off.

In a meta irony that out-metas all the other meta-references in the film, Matrix Resurrections is precisely the type of underwhelming, squeezed-out sequel it emphatically promises us it won’t be.

Storywise, you get the general gist of what’s going down – overall it’s a love story where Neo needs to reunite with Trinity (Carrie-Anne Moss).

As Anderson – existing, of course, in the fabricated reality created by the Matrix – he meets her as Tiffany in a coffee shop cutely called Simulatte.

He’s also seeing a shrink (Neil Patrick Harris) to sort out the visions he’s seeing in his head, composed mostly of clips from the original Matrix films. (Always a warning sign a film is heading in the wrong direction.)

In what often sounds like a parody of the original films, the people in Matrix Resurrections indulge in endless streams of pseudo-spiritual psycho-babble and metaphysical mumbo jumbo; it’s a constant barrage of tangled exposition about source codes and transferring consciousness and energy flows that is difficult to track, even if you’re concentrating. It’s tedious and tough on the ears.

Still, there’s always been an implicit deal with the Matrix films – discuss multiverses and alternate realities and philosophical concepts all you like, just give us some decent doses of action.

Well, that trade-off just ain’t here. Way too much blabbing, not enough action – and what there is can’t match anything from the original films, especially Matrix Reloaded.

Remember the fight Neo had with all those Agent Smiths (Hugo Weaving)? And that brilliant extended chase sequence on the freeway? Unforgettable signature sequences.

There’s nothing in Matrix Resurrections that comes close to them, despite the 18-year advantage. Most of what we get is standard mulch – muzzle flash, fireballs, twirling cars and bursting helicopters.

They can’t even improve on bullet time, that brilliant concept that helped the first Matrix film (1999) take out the Oscar for Best Visual Effects. It was truly revolutionary. No such ingenuity here.

One technical aspect about the film cineastes will find really irritating, though most people might not care about, is that the damn thing was shot on video.

Consequently, any scene set at night or in the gloomy world of the Matrix has a saturated, muddy hue.

Worse, the film is also full tell-tale video motion blur that you don’t get with proper film, with the singularly unfortunate effect of sporadically making an obviously expensive film look cheap.

Because the original films were so innovative and cool and are regarded with such affection, it’s not hard to guess that Matrix fans and normal humans alike really want this film to be good.

All that said, The Matrix Resurrections certainly is thought-provoking – that thought being “why did they bother?”

Expect to see lots of sour faces in the foyer afterwards.