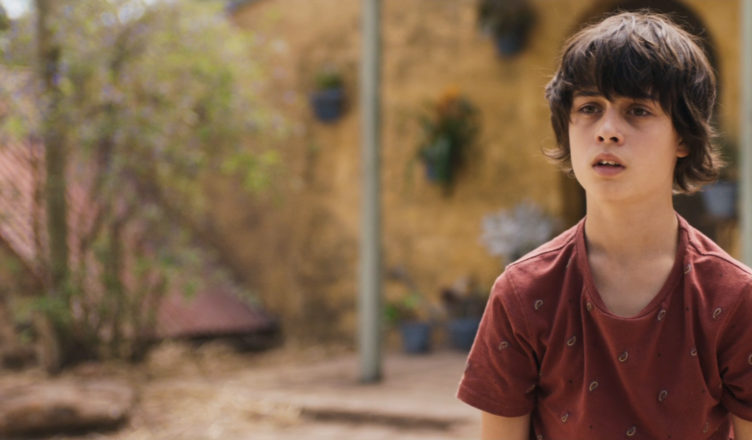 Growing lad: Michael Crisafulli plays a 12 and a 17 year-old in ‘Chasing Wonders’.

While visiting the Spanish home of his father, teenager Savino (Michael Crisafulli) recalls their difficult relationship during his school days.

Flashing back five years we see Savino (still played by Crisafulli, only younger) living with his extended family on their luscious wine property in South Australia’s Barossa Valley, captured with light-loving cinematography by Denson Baker.

He’s trying to live the life of a young teen, messing around with friends, going to school, seeing how he fits in.

The big crink in his life is his domineering father Felipe (Antonio De La Torre), a short-tempered, resolutely loud gent who has strong ideas about how Savino should behave and what his obligations are to the family legacy.

Upon receiving a telescope as a birthday present, grandpa Luis encourages Savino to steal away into the star-spangled night, along a giant above-ground pipeline to a better elevation from where a more inspiring view of the heavens can be had.

Such dangerous dreaming is not on Filipe’s agenda, and so the tensions boil up over the true nature of this jagged father-son relationship and whether the interests of the family business should be imposed onto him.

As far as “coming-of-age” yarns go – is there not a better term? – the film predictably touches on the importance of “being yourself”, a standard, age-old theme that has become something of a genre cliché, though it is thoughtfully handled here.

Modest in scale and intent, Chasing Wonders is, admittedly, not a film of big beats or jolting dramatic moves; the subdued direction is a tad languid and could have done with being a bit more punchy.

Still, it’s a well-performed piece, with nicely-etched turns from Spanish movie icons Paz Vega and Carmen Maura (as Savino’s mum and grandma, respectively) and a fine load-bearing performance from Crisafulli, who shot the film’s opening sequence in Spain five years after the Australian shoot. It’s a nice touch that puts us in mind of Richard Linklater’s Boyhood, in which the lead actor was filmed over the course of 12 years.

The screenplay for Chasing Wonders is by Australian long-hauler Judy Morris, who also wrote Happy Feet 2, Eye of the Storm and Happy Feet, which she also co-directed.

Prior to all that she was, of course, a renown actress, putting in top work in the renaissance-era classic In Search of Anna, Peter Weir’s The Plumber, The More Things Change and in the excellent 1980s anthology series Spring & Fall .

Footnote: According to reports, the post-production phase of Chasing Wonders was somewhat bumpy. Though the film’s director is credited as Paul Meins, the on-set direction was by Jim Loach (Oranges and Sunshine), who departed the film before editing.