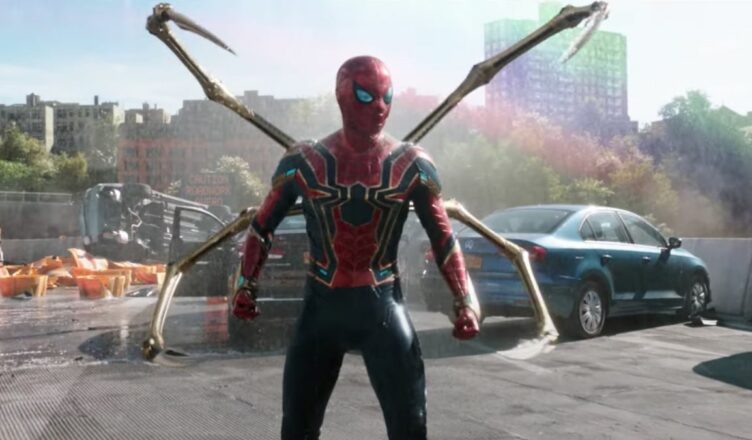 He’s got legs: Tom Holland suits up again in ‘Spider-Man: No Way Home’.

SPIDER-MAN: NO WAY HOME ***1/2 (148 minutes) M
Oh, what a tangled web we weave when first we practice to tear the fabric of space/time as we try to make everyone forget you’re a superhero so your life can reclaim some sense or normality.

That’s one of the big lessons Peter Parker (Tom Holland) learns in the fabulous new Spider-Man film when he pays a visit to Dr Strange (Benedict Cumberbatch) and asks for a big favour.

After everybody found out that Peter was, indeed, Spider-Man fame and celebrity has not only turned his life upside down, but those of his girlfriend MJ (Zendaya) and best pal Ned (Jacob Batalon). Seems their association with Parker is keeping them from being admitted to their schools of choice.

So to Strange Peter goes begging, hoping the good doctor can make it so that everyone forgets that he is Spider-Man.

Without much hesitation or inquiry – a big hole in the film’s story – Strange agrees, but while he’s casting his spell Peter tries to add caveats, which Strange – in another big story hole – tries to accommodate.

It’s strange that Strange is allowed to behave in such a sloppy manner given that he is supposed to occupy the intellectual end of the much-touted Marvel Cinematic Universe. He’s certainly meant to be the smartest, most cultured and best costumed of The Avengers, so his impulsive granting of Peter’s giant wish doesn’t really wash.

Still, it’s Christmas, the season of goodwill when we are encouraged to love and forgive and hand out free passes to the makers of $200 million tentpole films who appear to have written the first act of their story outline on the back of an envelope while riding the Uber to the pitch meeting. So let’s let it go. This once.

Long story short – and at two-and-a-half hours, it is long – the wrong-headed wizardry results in portals opening up that lets in Spider-Man villains from other universes – or, to put it more accurately, other films in the Spider-Man series, going back to the 2002 kick-off movie directed by Sam Raimi.

As Marvel super-hero films go, it’s got to be said what a thoroughly swell job director Jon Watts has done here.

Watts helmed the other two Tom Holland films Spider-Man: Homecoming and Spider-Man: Far From Home, and this one (again written by Chris McKenna and Erik Sommers) towers above them for its humour, action and sheer strength of story – once it recovers from its rather wobbly start, that is.

As soon as No Way Home finds its feet it shapes up as arguably the best, most emotionally resonant MCU film thus far, with Avengers: Endgame its main competition.

Balancing some great action reels – the Strange vs Parker chase scene is an absolute pearler – with scenes that really touch the film is actually memorable, something very few Marvel sequels have managed to achieve.

What is beyond argument is that No Way Home features two of the best, most captivating scenes of any MCU movie, both of which deftly address the moral underpinnings of the whole Spider-Man saga in ways that will still even the most crowded and restless cinema into reverential silence. (That’s what happened at the jam-packed preview in Melbourne on Tuesday night, at least.)

Along with these glimmering gems the film gleefully serves up a few moments of real screen magic that are designed to go the other way by rousing and delighting everyone, whether they be hardcore Spidey fans (God love’em) or those mortals who mainly know the character from the old 1970s cartoon show.

Some stretches of dialogue, too, prove unusually percipient for a Marvel movie. Spider-Man has always been the most human superhero on the Marvel roster and while the action has him flying about performing impressive feats, the character remains emotionally grounded.

So enjoy – and be sure to stick around for the wonderfully animated end-credit sequence, which plays with the ideas of multiverses and space/time featured in the film. It’s not quite as hot as the end-credit sequence of the animated 2018 entry Spider-Man: Into the Spider-Verse but it comes close.