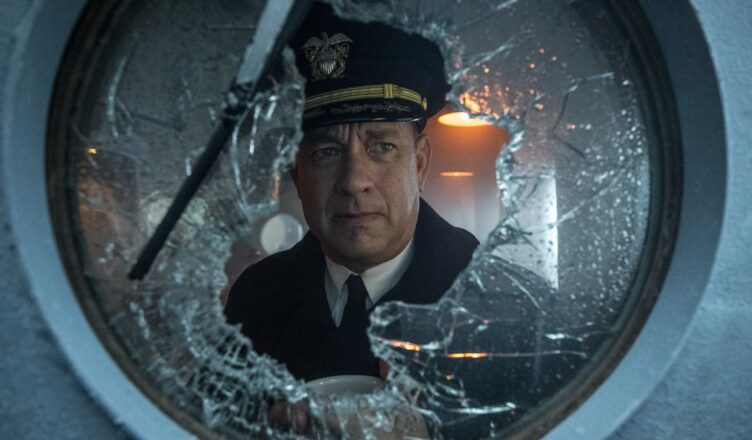 GREYHOUND ***1/2 (91 minutes) M
As the nervous, God-fearing, all-American commander of a US destroyer during World War 2, Tom Hanks gives us his best sea captain since Captain Phillips and his best soldier since Saving Private Ryan in Greyhound, a fine, fastidiously old-fashioned war film that, but for its brilliant visual effects, plays as if it had been made in the 1950s.

It’s 1942 and old sea dog Ernest Krause (Hanks) has just been granted a ship of his own to command. It’s a dream come true for him, soured slightly by the fact that his first gig for the US Navy is to help escort a convoy of merchant ships from the American east coast to their British allies, who are desperate for American supplies and troops having waged war against Nazi Germany on its own for a year.

Aside from the freezing cold and mountainous waves, the chief adversary for Krause and his crew are the German U-boats whose captains are so enthusiastic about their mission they send the American sailors taunting messages over the radio.

The ships have effective protection with air cover, but once they hit the huge patch of the mid-Atlantic that lies beyond the range of Allied planes the ships basically become sitting ducks for German torpedoes.

The escort ships are there to protect the merchant fleet, but it’s tough work battling nimble submarines with primitive radar and a limited number of depth charges. When the U-boats surface they’re vulnerable to the ship’s array of cannons and machine guns, but the night and the unsteady waves make the U-boats especially hard targets.

Written by Hanks and directed by Aaron Schneider (whose only other credit is the impressive Robert Duvall film Get Low made back in 2009), Greyhound is an action film from go to whoa, save for a brief introduction to his beloved (Elisabeth Shue), who offers Krause support and motivation alongside God, to whom he regularly prays.

And the action is thrilling, captured splendidly by Shelly Johnson’s fluid widescreen cinematography and rendered with great precision by an army of effects artists who clearly took huge pride in the vivid photo-realism they could bring to scenes involving ships cutting through rough water, depth charges going off, blazing guns, torpedo runs and distant vessels being hit. The work perfectly complements the congested, sea-battered interiors of Krause’s battered destroyer.

It’s usually the case with modern war films, such as Midway, that archival footage is used as a reference to get the look just right and that’s obviously been the case here. There are even VFX scenes with water droplets on the camera lens. How can you not love that attention to detail?

In the tradition of many vintage war films, all the fighting and strategizing doesn’t leave much room to delve too deeply into character. The only insights we are offered about Krause is that he is a man of faith, a patriot, a respected, level-headed commander and that he can do his job for a long time without needing to eat any of the meals that are constantly brought to him.

And, of course, there’s no time for the Germans, who remain as abstracted in this as they were in Christopher Nolan’s Dunkirk. There’s no fault in that as it simply reflects the truth that when you’re engaged in battle you tend to only experience things from your side.

Besides, Greyhound is a full-on WW2 action film, not a drama. If you want to see a great character-driven war film involving an American destroyer and a U-boat check out Robert Mitchum and Curt Jurgens in Dick Powell’s 1957 classic The Enemy Below. More than 60 years on it still stands as one of the most thoughtful and humane war films ever made.

Robbed of its cinema release by CV19, Greyhound hit big when released onto Apple TV on 10 July, setting a new first-weekend record for the platform.

You can bet your boots that should that level of success go on the studio suits at Sony – and everywhere else, for that matter – will continue rethinking the release models for big films.

Once an A-list film, originally intended for cinemas, hits its earning projections through a digital-only release the movie game will change forever – if it hasn’t already.

Greyhound is streaming now on Apple TV. The Enemy Below is streaming on Foxtel Now and is available to buy or rent on Google Play Movies, YouTube and Microsoft Store.