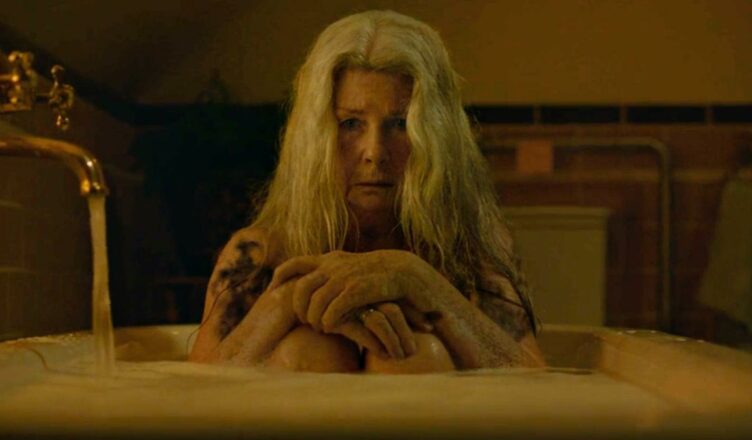 Cheer up: Robyn Nevin plays an old woman with a faltering mind in the horror film ‘Relic’.

RELIC *1/2 (89 minutes) M
It’s not turning out to be much of a year for Australian film with Relic clocking in as the latest clunker that looks as though it went into production long before the story was properly nutted out.

Upon the news that her mother Edna (Robyn Nevin) has gone missing from her country home, Kay (Emily Mortimer) and her daughter Sam (Bella Heathcote) drive up to check out what’s going on.

After some inquiries as the two settle in Edna suddenly reappears. It looks like a straightforward case of forgetfulness that comes with dotage. She’s already leaving reminder notes all over the place. Yet something else seems to be going on with Edna’s feeble mind once she starts burbling on about an evil presence in the house.

And it’s a creepy old hut that, in accordance with horror movie convention, seems to have a mind of its own.

There’s plenty of moody build up in Relic with people walking slowly through darkened rooms as a pulsating electronic soundtrack creates a sense of impending dread.

Is the house possessed by some spirit that is infecting Edna and causing all manner of strange noises? What’s with all the nightmarish visions Kay is having of rotting corpses? And the old cabin Edna’s father once occupied? And the window that is creeping Edna out?

Director Natalie Erika James, who co-wrote the film with Christian White, knows how to use stillness to build tension and does a good job creating the sense that the house has endless corners and recesses. There’s plenty of craft and style here. The lighting is muted, the camera moves with the sense that something awful is going to happen.

The something awful does happen: the film ends where the third act should begin. Urgh. It’s an on-going problem with Australian films, this inability, or refusal, to deliver a decent pay-off.

Frankly, the film is a fizzer, all tease and no cash out. James is adept at creating a brooding ambience but stumbles at the moment of truth. Having raised a decent degree of suspense it feels like the film simply chickens out.

Even given the license we grant makers of horror films to conjure their stories Relic also has too many false notes.

When Edna returns to the house she’s got this giant black bruise in the middle of her chest, suggesting something very bad happened to her during her disappearance. Yet Kay and Sam remain remarkably unconcerned. Even the nurse who examines Edna only manages a passing comment. Huh?

We’re also supposed to swallow how somebody trapped in a Twilight Zone-type predicament for hours on end would keep their cool so well. And Kay is unaccountably calm throughout the film’s “big reveal”.

The performances in Relic go from being restrained and understated to being anemic. What the film needed was to hit a pitch that got characters reacting the way Geena Davis did in The Fly when she discovered she was pregnant to Brundle-fly, or when Shelley Duvall in The Shining read the first draft of her husband’s manuscript. It’s all too well-mannered.

But hang on a sec. What of the suggestions that Relic is some pithy, allegorical tale about Alzheimer’s, dementia, the elderly, the loss of loved ones? Is the window the symbol of a soul that will not depart? Is the house a metaphor for memory, a physical manifestation of Edna’s deteriorating psychological state?

What tosh. Subtexts have fuelled horror films for a century, with the works of George A Romero and Eli Roth serving as recent examples. To pull that off, however, requires heeding One Big Rule: deliver your horror film first, then you can put in all the layers you like.

Regrettably, Relic doesn’t earn that privilege, not by a long shot. Yes, director James shows talent and promise, but that’s not enough for a film you have to pay to sit through. Yet somehow the film has been critically lauded, and the reasons for that remain a bigger mystery than anything contained in the film. It’s one of those cases where being at odds with the critical consensus leads you to wonder whether you didn’t see things that were in the film or that everybody else saw things that weren’t.

All up, Relic is a disappointing debut feature that has been vastly overrated, especially given how the creepiest thing in the film turns out to be a washing machine.

Relic is streaming on Stan.