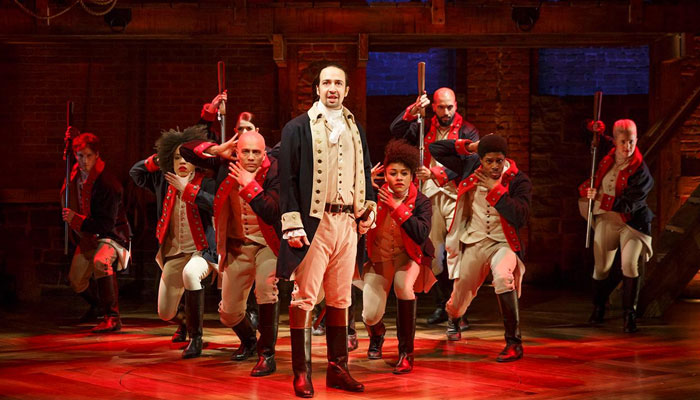 Me and my crew: Lin-Manuel Miranda is centre-stage most of the time in the historical musical ‘Hamilton’.

HAMILTON ***1/2 (160 minutes) PG-13 (US rating)
It’s been praised to the skies and beyond, hailed high and low as a brilliant, innovative piece of musical theatre, a spell-binding work of historical import, contemporary relevance and deep emotional impact.

It’s a breakthrough, a game-changer, a milestone, a masterpiece, the new benchmark against which all other big Broadway productions shall be judged. And it’s won enough awards to fill a laundry basket, including a Pulitzer.

Yet somehow, despite all the popular adulation, critical acclaim, box office success, hot air and hype it turns out that Hamilton, as presented here, is…actually quite good.

Created, conceived, written and so forth by Lin-Manuel Miranda – would there even be an undiscovered tribe in the depths of the Amazon jungle who doesn’t know this by now? – Hamilton is designed to amend the historical record by recounting the remarkable, if imperfect life of Alexander Hamilton, one of America’s founding fathers who, up until this musical anyway, has never received the widespread respect he deserves for shaping the young nation.

An immigrant, Hamilton (played by Miranda) was instrumental in America’s War of Independence and then went on to help first president George Washington (Christopher Jackson) guide the new country through its teething period leading up to the presidential race with a very groovy Thomas Jefferson (Daveed Diggs).

What has drawn so much excitement and admiration is the ingenious way many of the songs are sung as if written by Eminem, the white rapper whose phenomenal success in a predominantly black musical realm surely deserves some credit for establishing the creative space within which a production such as Hamilton could be possible. That was a long sentence.

Now, if you happen to be into rap, that unquestionably huge achievement is quite easy on the ear. If, on the other hand, rap happens to not be your cup of tea, the film’s 160-minute duration could prove a bit of a trial.

Thankfully, though, you’re at home, not stuck in a theatre, so it doesn’t have to be such a marathon. You’re able to hit pause and go make a cup of tea. Or not hit pause, given how some of the songs are so long you’ll be back with your Earl Grey before they’ve finished, secure in the knowledge that you probably haven’t missed anything.

The show’s music also includes hip hop, a bit of blues and a touch of soul, which pipes up nicely as Hamilton’s wife Eliza (Phillipa Soo) sings about her feelings for her husband, something that changes pretty drastically across the story thanks to Hamilton’s weakness for extramarital tail. (That’s a legitimate synonym.)

Front-and-centre for most of the time, Miranda puts in an extraordinary tour de force performance, which is impressive enough, but doubly so when you consider that he headlined for six months off-Broadway before a year-long run on Broadway. Judging from all the energy he brings to his singing and dance moves, the dude must have shed a kilo or two per show.

His commanding stage presence is also something of a treat for those who first became familiar with Lin-Manuel Miranda through his appearance opposite Larry David in season nine of Curb Your Enthusiasm. In that show he played himself, post-Hamilton, as the star of a musical comedy called Fatwa!, in which he played denounced author Salman Rushdie, who also appeared on the show as himself. For these souls finally seeing Miranda in and as Hamilton will bring a sense of closure as they finally find out what all the fuss was about.

Above these folk, special mention must be made of the fabulous work by Jonathan Groff who, as King George III, provides much comic relief as he offers commentary on America’s emancipation from Mother England. His performance is so committed he often dribbles spittle from his bottom lip while singing. Talk about an actor bringing it.

Much has been made of the show’s diverse casting, which is not as distracting as one might expect because the performances are so strong and the story-telling so clear. As The Personal History of David Copperfield demonstrated, miscasting is always a danger when you go down this road – would King George III worked as well without a white actor? – but it’s not an issue here. Besides, in a historical musical with rap and hip hop all over the shop it’s hard to fault the show for anachronisms.

As for claims that Hamilton boils with messages and themes that are especially resonant today, well, that’s perfectly true…provided you need reminding of the value legal immigrants bring to a nation – too many commentators in Australia tend to ignore the generation of post-war European migrants who helped build this country – or that the founding principles upon which America was built are pretty damned awesome.

The Hamilton we have here is not really a film, per se. A few separately filmed close-up, overhead and tracking shots aside, it is a live recording of the stage production, shot over three nights in June 2016 to capture the original cast shortly before Miranda and several others were due to leave the show.

For all its exuberance, energy, passion and power the film simply lacks any cinematic flair. All the lighting, choreography and blocking is strictly theatrical, thus making the event a tad dull, visually. Live, Hamilton might be spectacular. Here, it’s a photographed stage show. It’s a shortcoming no doubt exacerbated by the limitations of its straight-to-home release. As with so many other films, it was denied its stint on the big-screen by CV19, where it might have showed off its sets and costuming a bit better.

Still, that’s the only real issue with Hamilton, a good show with lots of tunes you’ll be humming long after the stage clears and the stream ends.

Hamilton is now streaming on Disney +