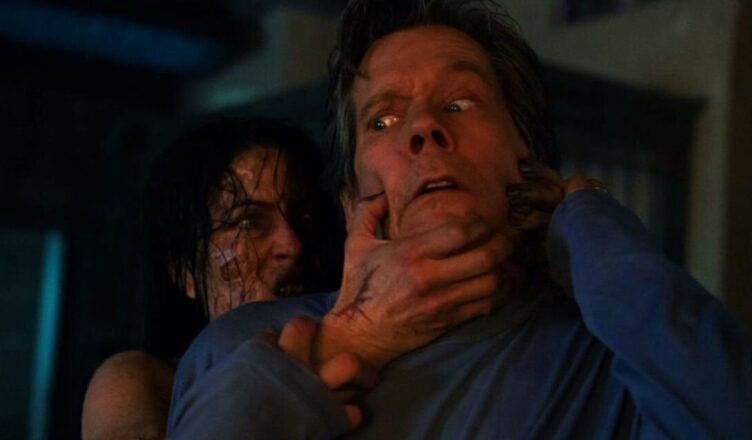 Unwelcome guest: Kevin Bacon stars as a troubled family man in ‘You Should Have Left’.

YOU SHOULD HAVE LEFT *** (93 minutes) MA
The age-old spook movie chestnut of the haunted house gets a good going over here as a troubled couple and their daughter move into a snazzily designed modern abode in the remote, fog-bound moors of Wales. In keeping with tradition the house, of course, sits on top of a hill.

Rising young actress Susanna (Amanda Seyfried), her daughter Ella (Avery Essex) and her much older husband Theo (Kevin Bacon) rent the place out hoping the seclusion might ease some of the issues stressing their half-happy marriage.

Once rich and famous, Theo is now living under the heavy shadow of suspicion that the murder charge of which he was acquitted before his daughter’s birth should have stuck. He seeks aid via a self-help audio book, which instructs him to maintain a journal. Theo also suspects his wife has been unfaithful.

Try as he might, Theo can’t unshackle himself from his past and is beset by vivid nightmares that see him running about the hidden corridors and rooms in the house where horrific visions await, many involving a drowned body and a creepy old man.

In accordance with convention, Theo comes to question how many of these night terrors are imagined and how many are actually happening. It’s a reworking of the trope where all the creepy goings-on are psychologically based, manifestations of a tortured mind trying to hide something.

The film is written and directed by veteran David Koepp, best known as the A-list writer responsible for Jurassic Park 1&2, Indiana Jones 4, The Paper (still one of the best films about daily metro journalism), Carlito’s Way, Inferno, Angels & Demons, Mission Impossible, War of the Worlds and Spider-Man. He’s also directed a clutch of films including Ghost Town (with Ricky Gervais) and the nifty 1999 thriller Stir of Echoes (with Kevin Bacon).

Here Koepp proves himself a dab hand at deploying practical effects (done in front of the camera) rather than visual effects (done in a computer) to create mood and deliver some very well-judged jolts. Some of the films most effective moments come from strategic lighting and careful framing.

He’s also blessed with above-average performances from his two big-name leads and from child actor Avery Essex, who joins that long list of movie kids whose presence have sharpened the edge of so many horror tales.

At its core You Should Have Left is strictly B-grade horror fodder elevated by a strong cast and nimble flourishes of style. It’s a great time killer, especially before hitting the sack.

You Should Have Left is available for rent on Google Play Movies, YouTube, Microsoft Store and Apple iTunes.