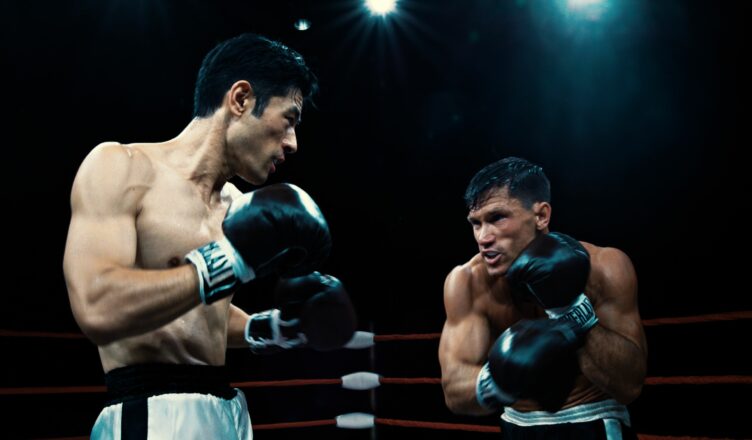 Face off: A champion Japanese boxer squares off with an American has-been in the post-war boxing drama ‘In Full Bloom’.

IN FULL BLOOM *** (87 minutes)
Given how convention-driven most boxing films are it’s surprising how impressive In Full Bloom turns out to be, cliches and all.

Set in post-war Japan where the bruises of America’s victory have barely begun to heal, the story pits champion local boxer Masahiro (Yusuke Ogasawara) against former US great Clint Sullivan (Tyler Wood) in a match that has a lot of personal and national pride riding on it.

Sullivan is a mess. His career is in tatters and winning in Japan could revive his prospects and set him and his pregnant wife Genevieve (Stefanie Estes) up for the rest of their lives.

But what is he to do when his slick and slimy deal-happy manager Silas (S. Scott McCracken) introduces him to a group of shadowy, well-dressed underworld figures who offer him a huge amount of money to throw the fight? Should he be mortally insulted? Or does his manager make a good case that taking a dive might actually help him more than a victory would?

Meantime, Masahiro is off in the snow-caked woods seeking out the wisdom of Tetsuro (Hiroyuki Watanabe), an eccentric trainer from the Mr Miyagi School of Fight Movie Trainers. (Should we forgive 1984’s The Karate Kid for embedding this trope into fight films? Or should we be thankful?)

While Sullivan wrestles with his manager and pounds away at his locker in frustration, Masahiro enjoys a more luxurious time preparing for the fight.

Tetsuro drip feeds him morsels of bumper sticker wisdom, such as the difference between ego (bad thing) and confidence (good thing), while putting him through some reflex-sharpening exercises. These involve catching fish by hand, assaulting trees and resisting the sexual advances of a super-hot prostitute.

The cluster of boxing-movie chestnuts in the film go all the way back to the 1949 Robert Wise classic The Set Up, traversing the genre through Raging Bull, Pulp Fiction (yes, it counts), The Fighter right up to the new-generation Rocky films.

But is In Full Bloom honouring cinematic tradition or merely reciting boxing-movie tropes?

It’s a matter of delivery. Done poorly, the film would have come across as a bland rehashing of cliches.

Thankfully, the film is a flourish of style, with the strong direction from debut writer/directors Reza Ghassemi & Adam VillaSenor eliciting top-shelf performances from a no-name cast and filling the film with tough dramatic scenes and lyrical visuals that rework a pretty standard scenario into a package we’ve never really seen before.

It’s an engrossing exercise in cinematic alchemy, reshaping the familiar into something that looks and sounds unique.

The film has an engaging non-linear structure, sudden shifts in tone and dashes of surrealism. The performances throughout are sharp and on point, with McCracken especially good as the manager who wants it all and who thinks he can sell anything.

What really cracks the film open is its outstanding look, with directors Ghassemi & VillaSenor – who were also responsible for editing, production design and cinematography – gracing the film with a distinct noir feel through the expert use of shadows, stark contrast, close-ups and a restricted colour palette.

Of key importance, of course, is the climactic fight sequence, and this is where the film truly comes into its own.

Shot against a black background the first bout consists of a remarkable single shot as the camera twirls around the two boxers as they pound into each other. Stellar editing and swift camera moves come into play in the following rounds, emphasizing the ironic intimacy that can exist between two determined boxers.

Martin Scorsese’s 1980 classic Raging Bull is often used as the benchmark for great boxing cinematography. What Ghassemi & VillaSenor achieve with In Full Bloom – with the help of veteran fight co-ordinator Darrell Foster (Ali; Bleed For This; I Spy; Play it to the Bone) – is in that league.

But surely the film is just an example of flash over substance.

Here’s the point: when filmmakers render a stock story with great style they’re not just wrapping it in affectation, they imbue it with fresh meaning and potency.

The idea of “style over substance” or “style versus substance” is predicated on the nonsensical notion that the two are somehow mutually exclusive rather than intrinsically linked. Almost every worthwhile work of art – any art – is a marriage of style and substance.

Style elevates substance when deployed with skill. If the skill isn’t there cracks will show and the work suffers. That’s certainly not the case here.