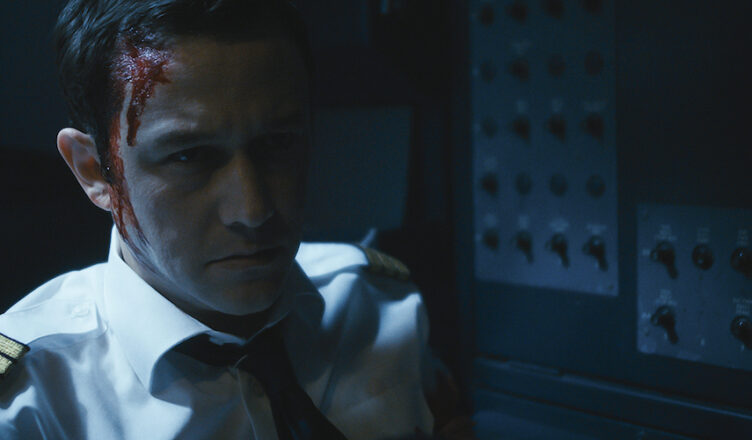 7500 **** (92 minutes) 16+
Buckle up for one ripper armrest clutcher as Joseph Gordon-Levitt (The Dark Knight Rises; Jon Don; 50/50) puts in a career-besting turn as a co-pilot in a terrifically taut, tense thriller set almost exclusively in the cockpit of a stricken German airliner that has the great misfortune in our post-9/11 world of being threatened by Islamic Extremist hijackers.

Alfred Hitchcock set the standard for setting entire films in a single locale with such classics as Rope, Lifeboat, Dial M for Murder and Rear Window (66 years old; still the best of the sub-genre) and his spirit is duly channelled by writer/director Patrick Vollrath in a knockout feature debut.

The preparations for a seemingly routine flight invisibly impart to us a raft of plot points that come crashing together once a small group of shiv-wielding Islamic terrorists attempt to enter the cockpit, but are kept at bay by the unbreachable security door.

We are stuck in the cockpit with the pilots as the disaster unfolds and Vollrath ratchets up the suspense as the situation gets increasingly desperate with the security camera outside the door offering the only vision of what is happening in the rest of the plane as over 80 petrified passengers are held at the mercy of the terrorists.

Perhaps surprisingly, there are no B-grade tropes here, such as anxious close-ups or melodramatic backstories. It is told in real time and with claustrophobic urgency as matters of life and death spark against the responsibility air crews have to keep their planes from terrorist control.

And the constant shifting of control is the linchpin in what is a great nail-biter that, unlike so many thrillers today, actually manages to keep you guessing right till the end.

As for the subject matter, we all became hyper-sensitive to the issue of airline security after 9/11 and, thanks to the bravery of those trapped on United Airlines Flight 93 it was commonly understood how any post-9/11 hijacking attempt was unlikely to go unchallenged by passengers. (Quick salute here to the 2006 feature United 93 and telefilm Flight 93, both of which served as fitting tributes.)

Those themes are deftly woven into the story of 7500, helping to keep the top-flight thriller grounded in realism.

7500 is now streaming on Amazon Prime.