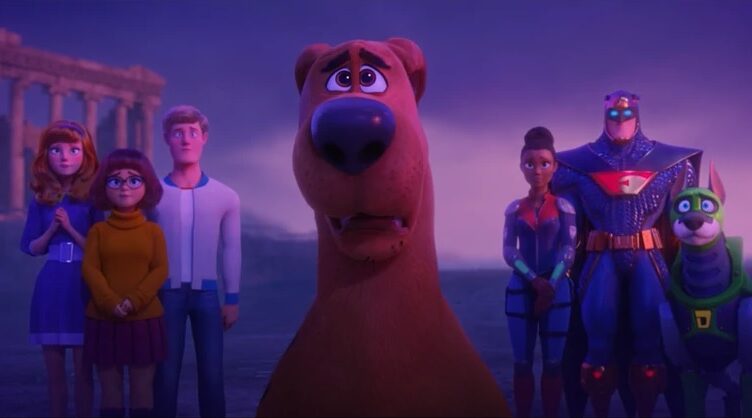 SCOOB! *** (92 minutes) PG
As is typical with most big-league animated features, the frenetic, funny, franchise-extender Scoob! isn’t content with a main plotline and maybe one or two sub-plots, it’s got about a dozen narratives going on at once. So beware that should you sneeze or glance at your watch you’ll probably miss something.

Gliding alongside all the lightening-fast exposition is an adrenalized exercise in fast-moving, fantasy-based boom-crash action as the Mystery Inc gang do battle with Dick Dastardly (who served as the studio’s marvellous, long-serving, go-to villain) to rescue them and foil his admittedly ill-defined plans.

In brief, Dastardly needs Scooby-Doo to unlock the Gates of Hell in Greece – it’s never explained why, but never mind) – so kidnaps him and best-friend Shaggy in his magnificent flying lair. Meanwhile Fred, Daphne and Velma pursue them with the help of Dynomutt and the Blue Falcon (also from the Hanna-Barbera stable on 1970s TV animated shows).

Peppered throughout all the action and fast talking – keep up if you can – are plenty of very funny, adult-oriented gags, the best being one about Daphne’s alcoholic father and a Pulp Fiction quote designed as a reward for those paying close attention.

Tying together the film’s frenzy of colour, movement, verbiage, explosions and several impressively designed set pieces – love the long tracking shots – is friendship, which motivates all the main characters, including Dastardly, to varying degrees. That the theme comes across with such clarity in such a scrabble of a film is testament to director Tony Cervone, a veteran of the Scooby-Doo franchise.

As well as being thoroughly enjoyable family entertainment, Scoob! can proudly take its place in the admittedly crowded pantheon of films that pay tribute to dogs. Apart from the bond between Scooby and Shaggy, there are also nicely etched moments between Dynomutt and Falcon and between Dastardly and his legendary, long-lost canine companion Muttley. And there’s even a fourth dog involved who is crucial to the film.

Will cinema ever tire of this theme? Probably not.

Intended as an animated reboot of the live-action big-screen Scooby Doo adventures we saw in 2002 (Scooby-Doo) and 2004 (Scooby-Doo 2: Monsters Unleashed), Scoob! missed its shot at the cinema thanks to the CV19 shutdown but has thrived with its digital release.

The lucrative franchise began in 1969 with the animated TV series and has continued with a host of TV shows, specials and spin-offs, including 2018’s Daphne & Velma, a pretty good stand-alone outing.

Scoob! was supposed to herald a film series featuring characters from the Hanna-Barbera world. Here’s hoping it happens, and that The Funky Phantom and The Hair Bear Bunch are included. (Seriously, what were these people on when they thought up these shows?)

Footnote: Of all the mysteries Scooby and the Mystery Inc gang have worked on, the one big riddle that has never been solved is why Fred, a handsome young man with a great build, a fine dress sense and an ascot, has never developed any romantic interest in either Velma or Daphne, despite both ladies being attractive and, presumably, single.

So, what’s the deal with Fred? Scoob! offers two pretty strong hints about the reason behind Fred’s reticence over approaching the girls.

Also, the presumption that Velma and Daphne are heterosexual is shaky indeed. How many suggestions were there of their mutual attraction in the 2002 film? And what about those deleted scenes on the DVD? When Velma sang Can’t Take My Eyes Off You it was pretty clear she was singing to Daphne, not Fred.

One of the film’s writers, James Gunn, has said how Velma was a girl lover in his original screenplay but that she was gradually diluted. On top of that, director Tony Cervone has stated how cartoon versions of Velma have been gay. Many in the LGBT community certainly regard Velma and Daphne as sapphic symbols.

Here’s looking forward to further insights in the sequel and hoping that the issue is never fully resolved. After all, here is a clear case where it is far more fun to be teased than to be told.

Scoob! is available to buy and rent from the Microsoft Store, Google Play Movies, YouTube and Apple iTunes.