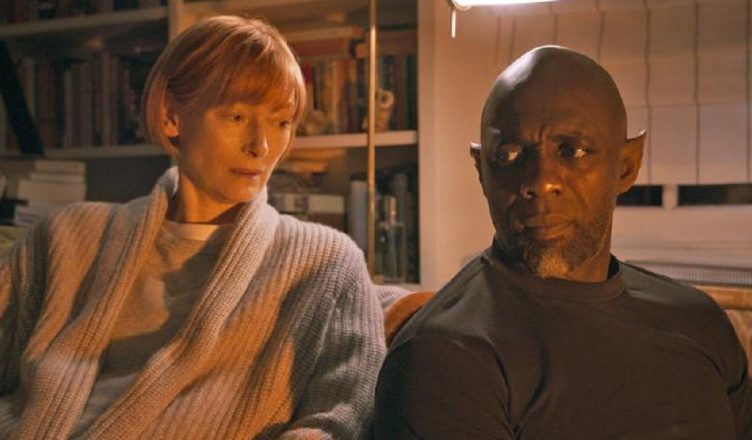 THREE THOUSAND YEARS OF LONGING * (108 minutes) M
From George Miller, one of the greatest directors Australia has ever produced, comes Three Thousand Years of Longing, a powerfully boring reworking of the old tale about the genie in the lamp granting wishes.

Based on The Djinn in the Nightingale’s Eye by A. S. Byatt, what begins as a seductive fantasy tale quickly derails into a dirge that never regains its footing.

The story takes us into the prim and proper life of Alithea Binnie (Tilda Swinton), a British expert on storytelling who is visiting Istanbul to address a conference.

A loner with a strong imagination, she happens upon a cute little bottle in a shop and finds out back in her hotel room that the thing contains a genie, or Djinn (Idris Elba).

It’s a wonderful encounter. Having lived an intellectual life of academia and rational thinking, Alithea is confronted with a fantastical vision that challenges her understanding of the world while tapping into a dormant desire to indulge the more magical side of life.

As reward for setting him free, the Djinn (marvellously realized through some superb VFX, by the way) grants her three wishes, a deal familiar to us all thanks to Aladdin, Bedazzled (by way of Faust), I Dream of Jeannie (Barbara Eden still reigns as Best Genie Ever) and, of course, Bugs Bunny and his classic 1948 cartoon A-Lad-In His Lamp.

A terrific set-up to this point. Having bought into Alithea’s cloistered life of intellectual rigour and emotional solitude, we’re poised to see what she does with these miraculous powers to, as the Djinn puts it, grant her heart’s desires.

Had it been a quick and amusing diversion, that would have been fine. Unfortunately, the detour consists of three full-blown tales, goes on for, like, an hour or more and makes abundantly clear that the Djinn isn’t much of a storyteller.

As visually adroit as they are, the yarns the Djinn spins are monumentally uninteresting and unengaging, the flat direction by George Miller so plodding the film should have been called Three Thousand Years of Longing for the Film to End.

And when we do finally get to the pay-off reels you are forced to wonder: what happened to Alithea’s supposedly over-active imagination? Having gone to so much trouble establishing it, the film seems to drop it as a key story point. How unsatisfying.

For all the talk about magic, that’s the one element missing from the film. And apart from one joke Alithea tells, the lack of humour throughout turns it into a dull, dour affair. Where’s Barbara Eden when you need her?

There’s one promising scene where we meet Alithea’s opinionated, loathesome neighbours. Couldn’t the film have had more fun with them?

There is one unintentional treat. As the Djinn yaps away with Alithea in the hotel room, both are dressed in their bathrobes, echoing Good Luck to You, Leo Grande. Admittedly, that’s not much of a treat but the mind needs to latch on to something to keep from wandering off into grocery list world.

The world is never going to settle the debt it owes George Miller for what he has given cinema.

What George Miller proves with Three Thousand Years of Longing is that even the best stumble.

As lauded a filmmaker as Miller is – he’s one of the few living directors whose name is a brand – his storytelling instincts appear to have defied him here, rousing great anticipation in the first act, then going off-road for the sake of uninvolving narrative.

Still, he’s earned some leeway. Here’s looking forward to what he will bring us with Furiosa, the Mad Max: Fury Road prequel he’s presently filming.