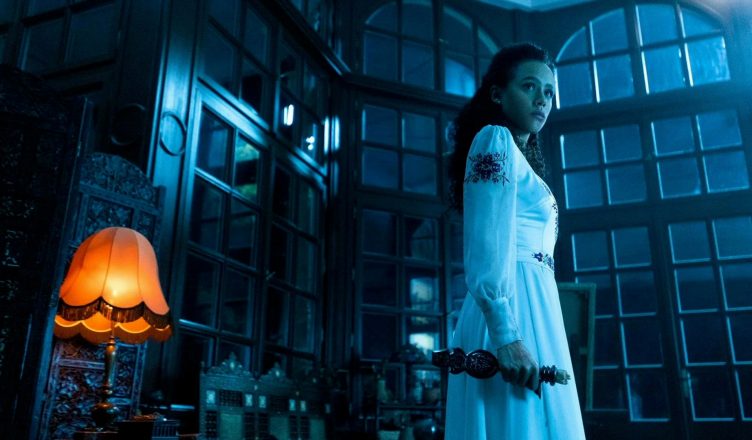 What’s that noise?: Nathalie Emmanuel works hard in the horror film ‘The Invitation’.

Lovely young New Yorker Evie (Nathalie Emmanuel) finds herself in a huge, bloody, unholy mess with her distant, ultra-wealthy British relatives in the low-flying vampire horror of The Invitation – and it’s all due to happenstance, a tiny, totally random act without which there’d be no story.

While Evie is serving food at a swish corporate party, her bubbly, sassy best pal Grace (Courtney Taylor) nicks a swag bag containing an assortment of expensive free goodies. These, pray, include a free DNA test.

It’s this thing – and this alone – that puts her in contact with her Brit cousin Oliver (Hugh Skinner), who happens to be in New York.

They meet for coffee, he convinces her to attend a big wedding at the family’s mansion and before you can say “fish out of water” Evie’s over there marvelling at the lush surroundings, arguing with the help and falling for the handsome young estate owner Walter (Thomas Doherty; Gossip Girl).

As Evie interacts with all her suspiciously welcoming new-found relatives director Jessica M Thompson punches out more than enough sledgehammer hints that something sinister is secretly going on behind Evie’s over-exposed back.

Not the least of these is the fact that Walter’s surname is Deville – Devil. Get it? – a handy, tell-tale moniker that accurately registers the level of sophistication The Invitation operates on.

Nothing wrong with cheesy horror, of course, and when it’s executed effectively you can lay on all the clichés you like.

But when it’s as predictable, sluggish and as starved of fresh ideas as what’s served up here you’ve got to wonder why they couldn’t have toyed with the vampire formula just a little bit more. You know, a la Lost Boys.

Now, to be fair to what is obviously an unapologetic slice of schlock, if you happen to be the type of undemanding, easily spooked horror fan who is willing to overlook the wildly improbable coincidence that triggers the story – why is it so damn flimsy? – it’s possible you might derive a mild degree of enjoyment from the blood-soaked shenanigans as the family try inducting Evie into their Undead community.

And the hard-working cast can’t be faulted for the effort they inject into their cardboard charges. Doherty seethes with seductive, oily charm; Stephanie Corneliussen is hammy as a sneering relative; and Emmanuel, who is front-and-centre and fully present in almost every scene, emerges as something of a girl power figure as she confronts the evil scheme ensnaring her. She kicks ass convincingly.

Still, for anyone wanting anything fresh or novel the thing just doesn’t fly. So, if Evie hadn’t been given a free DNA test stolen by her friend from a freebie bag there’d be no story? Sorry to labour the point, but even the most ardent fans of cheap Goth horror might be hard pressed to forgive such a limp, lousy set-up.

Regrettably Australian director Jessica M. Thompson (this is her second feature after 2017’s The Light of the Moon) doesn’t add much spice to the genre conventions that unfurl across an admittedly impressive production.

Indeed, mid-way through The Invitation you might well ask yourself: “Why am I sitting through this C-grade horror mulch in a cinema? Didn’t God invent streaming services precisely for films such as this?”

The Invitation is respectfully declined.

And as if it didn’t already have enough weighing against it, The Invitation is but the latest film to fall victim to a blabbermouth trailer that reveals way too much. If you’ve seen the trailer, you’ve seen the film.

Whatever happened to the art of the teaser?