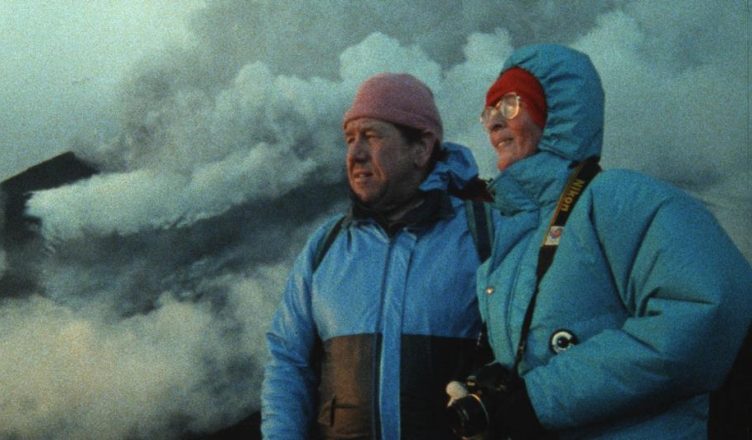 FIRE OF LOVE *** (94 minutes) PG
Commitment in a relationship doesn’t come much more dedicated than with Katia and Maurice Krafft, a famous French couple who spent just a little bit too much time exploring their love of live volcanoes together.

High on their list of achievements during their many science-fuelled adventures was the spectacular footage they captured of volcanoes at their most beautiful and dangerous, with lava shooting into the air and rolling down mountain sides, often perilously close to them and their camera.

These scenes are extensively showcased here and are amazing to behold, yet almost as transfixing are the many interview clips as director Sara Dosa tracks their unique career and relationship.

The wonders of drone technology have taken much of the risk out of filming angry volcanoes and now produce incredible images not even the Kraffts could have envisioned, making the chances they took and the footage they shot all the more astounding.

HIT THE ROAD * (93 minutes; subtitled) PG
From first time director Panah Panahi comes a rock-solid bore of a road movie in which an Iranian family dash off in a borrowed car and head across a bland landscape to the Turkish border.

Aboard for the joyride are; dad (Hassan Madjooni), whose leg is in a cast; mum (Pantea Panahiha); their annoying, hyperactive young son (Rayan Sarlak); and the older son (Amin Simiar), who does most of the driving and who is the reason for the journey.

They’re trying to get him across the border to safety, telling lies to the kid so he presumably won’t get scared or blab to anyone.

And blabbing pretty much covers the content. If only the blabbing was witty, or funny, or interesting. Not even the scenery is taken advantage of as Panahi (who also wrote this dirge) lurches from one minor event to another, often using long takes with no real flair. It’s the kind of road movie that makes you wish for the sudden appearance of a large sinkhole.

The kid is meant to be the film’s glittering centrepiece but after several minutes you wish he’d wander off to the nearest mountain range. He goes from cute to irritating at record speed, his monotonal whining and mugging only serving to underscore what a dull, hollow film it is.

Hands-down proof that Hit the Road is a full-on art-movie fail comes in its final reel where, bereft of any engaging ideas, the film deliberately, knowingly crosses the line into sheer pretension.

They’re clever-clever moves presumably ripe with profundity that are supposed to incite deep analysis and speculation over what an amazing, insightful film it is when, in all likelihood, they’re just gimmicks designed to pep up a bored audience.

Nice try, but no sale.

As for its message that life in Iran ain’t so sweet? Wow. What a revelation.

MIFFplay
Before the resplendent glow of MIFF2022 recedes into darkness for another Covid-disrupted year there’s still a wealth of online offerings available until Sunday midnight at MIFFplay.

Here’s a tiny handful of highlights.

Made solely from 1969 archival footage and with no narration, the wonderfully odd Rewind & Play chronicles the attempts by an incompetent French reporter to conduct a coherent interview with jazz legend Thelonious Monk, who spends most of the film sitting at his piano looking baffled and bemused. All the tight shots of his eyes betray what he must be thinking as the reporter stumbles from one interview fail to another, often instructing his producers to erase what he’s just uttered.

As the 2019 mayoral election heats up in the over-heated mining town of Kalgoolie-Boulder, a charmingly unkempt, no-filter candidate emerges from the town’s dirty, dusty fringes with delusions of a David & Goliath contest. Named after its brazen star, General Hercules is an absorbing, surprising character study of both John Katahanas as he runs for office and of the historic town, which is slowly but surely being eaten up by the giant mining pit operated by an army of fly-in/fly-out workers. It’s after the foregone conclusion of the election that director Brodie Poole delve into the life and mind of The General. Some of it’s funny, some of it’s scary, some of it might just break your heart. An excellent doco.

Far from being a wispy-eyed exercise in nostalgia decrying the march of progress, The Lost City of Melbourne offers a level-headed overview of the city’s evolution, from its world-leading growth spurt to its demolition frenzy to the demand for preservation legislation. Thoroughly researched; fascinating from go-to-whoa. Splendid stuff. Directed by Gus Berger.

For a tasty entrée to the totally free offering of short films check out Victim, a taut mini-drama about the frayed relationship between a mother (Kat Stewart) and her troubling son (Ned Stanford). Written and directed by Robin Summons, it’s a thorny thumbnail of a stressed-out mum and a teenager who might be about to hit snapping point.