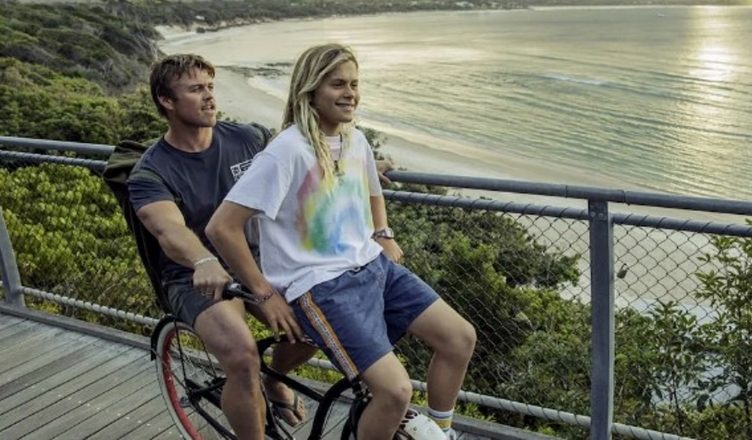 BOSCH & ROCKIT * (107 minutes) MA
Seems like we’re back to the bad old days, folks, as yet another dire Australian feature film lands with a thud and apparently no idea of what it’s meant to be or who its audience is.

Set in the era of dial-up internet and rotary phones, Bosch (Luke Hemsworth) is a drug-dealing surfer who goes on the run with his surf-loving, school-hating son Rockit (Rasmus King) when his lucrative operation goes up in flames.

Having done a serviceable job setting up a reasonably interesting premise about a flawed single father trying to redress his past by bringing up his son properly, the film goes off the rails before the end of the first act as Bosch & Son appear to drive off into another movie.

Flaccidly directed with absolutely no sense of tension or direction by first-timer Tyler Atkins, the film is a tonally sibilant mess, its stuttered pacing and disjointed rhythm suggesting the screenplay might have done with a few more passes.

Though father and son are supposed to be the subject of a dogged police chase, there’s no urgency with plenty of time for lovingly filmed surfing sequences and leisurely scenes of Rockit getting close to his new girlfriend.

The woeful character stereotypes don’t help: the cop is a sleazy, overweight cliché; Bosch’s girlfriend is a ditz; Rockit’s mum an alcoholic flake-out.

We also get some really stupid plot turns. At one point Bosch drops a bombshell so ridiculous you have to wonder whether Rockit is sweetly naive or just plain stupid.

Much as one would greatly prefer to laud the performances of young actors with enthusiasm, it need be said that neither King nor La Rain ring the bell, the naturalism needed to sell their characters being in scant evidence here.

As for claims that Bosch & Rockit is a “coming-of-age” film – a chronically over-used term carelessly applied to anything involving a kid and a parent – well, it’s not. Or if it is, it’s a pretty warped offering.

If the film serves any real purpose, it’s in highlighting the resurgence of an age-old issue with Australian cinema.

While the average quality of local films has thankfully risen significantly over the past 25 years or so, we are still seeing too many Australian movies that lack solid narrative through lines and coherent stories with a central focus.

The movie’s MA rating for violence, drugs and language underscores how confused and undisciplined a film Bosch & Rockit is.

Primarily it’s a film about a teenage kid that’s attracted a strong adult film rating. Hmm. What’s wrong with this picture? Because it sure doesn’t work as a film for mature adults.

Is it unreasonable to suggest the film might have worked better had it been fashioned for a teen audience, perhaps aiming for a PG rating? Did it really need all the cocaine and cussing? Do F-bombs and C-bombs serve a story about first love and surfing?

As it stands, Bosch & Rockit is an example of yet another Australian film that could have done well by deciding what it wanted to be before hitting the road.

GIRL AT THE WINDOW 1/2 (84 minutes) MA
A dire attempt at a horror-comedy about a high school girl (Lauren Goetz) who suspects odd goings-on next door. Not scary, not funny and the shenanigans are so preposterous there’s nowhere to buy in to the story. The effects and sets look cheap, which doesn’t help. A big disappointment from director Mark Hartley, who made the superb documentary Not Quite Hollywood and the solid remake of Patrick. Should have left this one on the shelf.