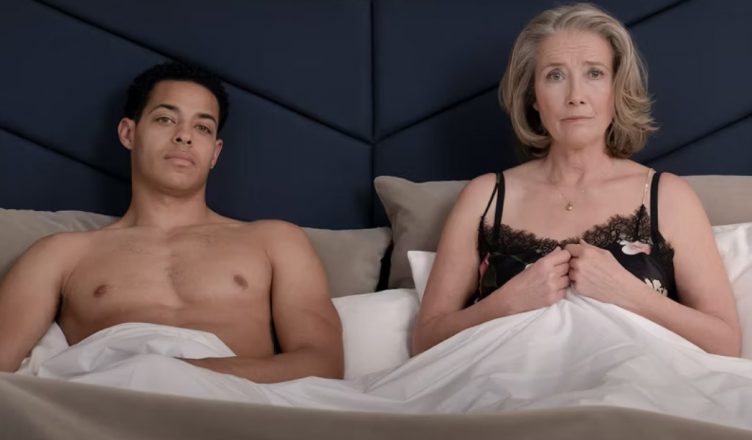 But just as the old proverb says that you can’t judge a book by its cover, by the same token – and in the same spirit of putting merit before appearance – you shouldn’t judge a film by its message.

Thus, it is tempting to laud Good Luck to You, Leo Grande for what it says about sexual liberation, oppressive marriages and the right for women to have as much pleasure as men. Bravo.

Alas, it’s just not a very good film. Worse, the premise upon which this drawn-out, single-setting, two hander is built proves to be simply too difficult to believe.

Nancy Stokes (Emma Thompson) is a 63-year old school teacher who hires young male prostitute Leo Grande (Daryl McCormack) to give her the singular sexual experience her late husband never did. As she awkwardly explains, it was a matter he seemed uninterested in and she was too timid to ask for.

Nancy is all nerves, guilt and anxiety. Leo is all smooth, sexy confidence, determined to show her a really good time, the payment for his services having been secured.

Yet, willing as she is to finally get the type of sex she has craved for untold aeons, Leo finds her a tough nut to crack. Embarking on her belated journey to sexual awakening, Nancy slowly learns to give herself permission to cast aside her inhibitions and get down to it.

Aside from the spots of sex – there’s nothing really graphic here, so if you’re expecting a disguised nookie film, forget it – there is much talk as the two explore each other’s lives over a series of encounters, all of which take place in the same hotel room.

We get plenty of Leo’s bumpy backstory, which is mildly interesting, but way too little of Nancy’s to make her believable, highlighting the central problem that undercuts a well-meaning film about an important issue.

There is simply not enough information about Nancy to explain how a woman of her age, education and relative attractiveness, living in an open society and working as a professional educator, could find herself in such a sexually unfulfilled situation.

To wit: Nancy is 63 and the film is set present day, meaning she was born around 1960 and so was about 40 when the millennium ticked over. That a woman of that generation would wait so long and put up with a sexually bland marriage for decades before finally paying attention to her own pleasure just doesn’t ring true.

Did she not see any films or read any books? How could feminism, the primacy of female empowerment and sexual freedom skip by her? Didn’t she have a television? Or an internet connection?

For all the energy and colour the awesome Emma Thompson brings to her performance, she is – and it hurts to say this – miscast. Nancy is too young, too attractive and too educated for us to buy the idea that she would have neglected herself for so long, or that she would have waited for the death of her sexually deadbeat husband to address her needs.

Dramatically, the film is quite pale and would surely have been far more enticing if Nancy was still married, or if she was 20 years older.

McCormack is good but struggles to bring spice to all the sex talk, which itself turns out to be rather bland. When Nancy produces her list of sex acts she wishes to perform, or have him perform on her, it’s a wonder he doesn’t recoil at how unimaginitive it is. The film could well have done with a few shock moments.

Even though Nancy always asks for Leo, how would she have reacted if he wasn’t able to make it, and sent a colleague with a different approach to her issues.

The grand lack of variance in Good Luck to You, Leo Grande leaves the piece feeling like a short film that has been stretched out into a feature, with director Sophie Hyde (52 Tuesdays; Animals) unable to overcome the theatricality of staging most of the story in a hotel room.

Given her financial limits, couldn’t Nancy have at least booked a different room, or a different hotel? You know, just for a change?