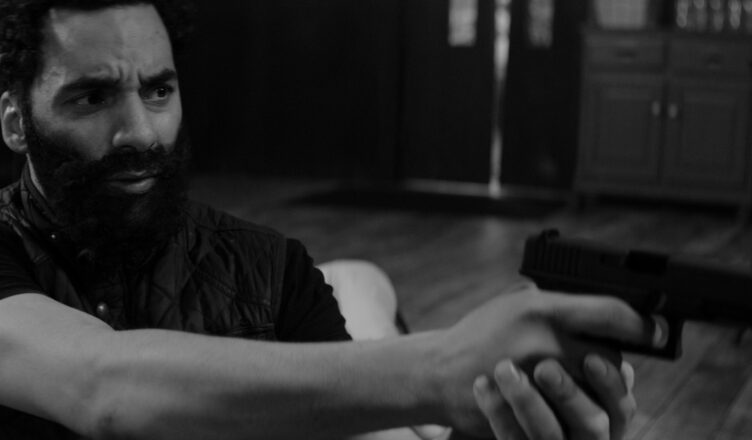 PARADISE CITY **1/2 (87 minutes)
There is much to admire in the style and labyrinthine plotting of writer/director John Marco Lopez’s Paradise City.

It’s a tough, issue-driven urban tale that thrusts itself into the belly of the beast when confronting raw nerve topics such as Islamophobia, terrorism, police tactics and violence.

That said, the film’s ambition and noble messaging can’t quite make up for its shortcomings, which include some overcooked plotting and a cache of performances that range from impressive to strained.

Artfully shot in widescreen black-and-white, the main trunk of the story involves an undercover cop (Kareem Savinon) who is tasked with gathering information about a small New York mosque run by an ex-crim called Nazim (Hassan Bradley).

To the frustration of the angry, arrest-hungry police chief Chief Frank Murdoch (Sticky Fingaz), Nazim spouts peace and non-violence to his small congregation, and seems to mean it. He even suspects that one of his flock is a cop and embraces whomever it might be with love, as if daring him to uncover a terrorist plot in the mosque.

Stumbling into this is the tale of verbose, strangely likeable drug addict Alistair (Chris Petrovski from Madam Secretary), who lives on the streets with his beloved Pitbull even though he is actually part of a super-rich family run by his icy, crew-cut sister Bianca (Laura Kamin).

Bianca is some piece of work. She’s not just eager to consolidate her position at the head of her family’s corporate empire, she’s willing to employ means that would make the criminals who dwell in the same streets as her brother quiver with revulsion.

To say that there’s a lot going on in Paradise City is an understatement.

Lopez certainly maintains an urgent pace and a busy narrative that offers a lot of topical food for thought about terrorism, prejudice and the crucial difference between decent Muslims and Islamic extremists – a brave point not enough mainstream films have dared address.

Yet the film can be faulted for over-reach, of trying to pack too much in, resulting in a scribble of story-lines that can be challenging to follow, especially when you throw flashbacks into the mix. With so many spinning plates to keep track of it’s hard to get fully absorbed by the story.

The standard of the performances is also erratic. There is strong work from Petrovski, who is especially energetic, and Kamin, whose steely demeanour would qualify her as a Bond villainess.

Of special note is Bradley, a non-professional actor who delivers his orations with conviction. He goes a long way to selling the film’s messaging about non-violence, peace and acceptance.

At odds with this are too many moments where it seems obvious the actors could have done with more rehearsal time. When these occur, it takes you right out of the picture.

Paradise City looks like a case of ambition out-running execution, an issue common to independent films where a filmmaker’s obvious passion to realize an idea isn’t matched by the resources needed to do it justice.

Still, a film still earns some brownie points when that ambition is able to shine through, and Paradise City does get its main objective across clearly enough, even if the film is a bit of a muddle.

Director John Marco Lopez was generous enough to get on the line from New York to discuss the film, its purpose, its making and to take a few critical questions.