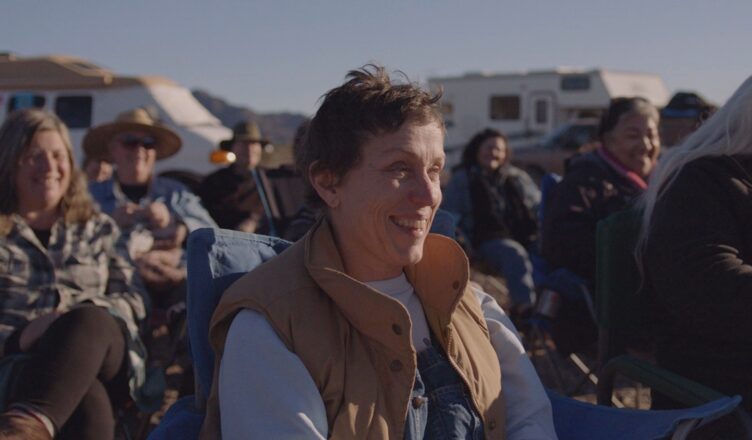 NOMADLAND ****1/2 (108 minutes) M
Economic downturns can wipe a town off the map – but what about its people? No longer needed, can they simply be tossed aside into the four winds like human tumbleweeds?

In Nomadland, writer/director/editor Chloe Zhao’s presents a lyrical cinematic ode to the ciphers of society as we join the uncertain journey of Fern (Frances McDormand), a woman in her sixties who suddenly finds herself in survival mode.

Freshly downsized, Fern is an unexceptional example of one of the many who are unceremoniously consigned by bad economic circumstances to the human scrap heap.

Her industrial hometown of Empire, Nevada is officially shut down when demand for its chief product, sheetrock, falls below the profit threshold.

Fern, who has already lost her husband to cancer, loses her house and finds herself with little alternative than to scrounge around for work by hitting the road in her van, which has become her new home.

As harsh and unwanted as her new lifestyle proves to be, it is a choice she has made, having turned down a kind offer from a relative to put her up in their home.

Struggling to make her meagre ends meet with part-time jobs, Fern finds succour in the fact that she has unwittingly become part of a transient community.

Composed of retirees, veterans, the unemployed, the discarded, wandering young folk and various other miscellaneous types, these motorized drifters are connected online; they form mutually supportive social networks that allow them to gather, often in town-sized numbers, to help each other with their road-borne lives. This naturally spawns new friendships – clearly a key source of emotional sustenance for these wanderers.

With plenty of story but no real plot, the film is a deftly fictionalized rendering of the non-fiction 2017 book Nomadland: Surviving America in the Twenty-First Century by journalist Jessica Bruder.

Zhao incorporates real-life nomads and non-professional actors into the piece, giving the film a semi-documentary feel enhanced by evocative cinematography that places these transient figures in landscapes that are as picturesque as they are indifferent and unforgiving.

Fresh from her Oscar-winning performance in Three Billboards Outside Ebbing, Missouri, McDormand delivers a masterclass from the “less is more” school of acting. She inhabits the downtrodden role with a quiet dignity; Fern’s persistence is driven by unstated pride, a resilient sense of self-worth and the faint hope that things might improve for her, however hard her situation becomes.

That said, there shouldn’t be any fudging around the fact that while Nomadland is an absorbing portrait with a lot of heart, that heart is a singularly heavy one.

Zhao does a splendid job taking us into the lives of modern-day nomads, moving us with their back stories and filling the film with authentic moments of warmth, empathy and human connection.

Still, this is ultimately a grounded, open-ended, social-realist film about those who exist on the outer rim of society, many of whom were cast out after building honourable and successful careers.

So don’t be surprised, or ashamed, should you get a bit misty-eyed.

The film draws on the experiences of those who suffered in the wake of 2008’s Global Financial Crisis and the subsequent “Great Recession” so it would have been easy for Zhao to wax political. Thankfully, but for one small instance, she carefully keeps the film from becoming a polemic.

One of the great qualities of Nomadland is that it actually has plenty to say about how society regards those on society’s bottom rung as human detritus. The film just says its piece with whispers, a more effective means of messaging than shouting.

Neither film deserves such derisive epithets, and it highlights just how silly these terms are.

Nomadland is in cinemas from Boxing Day for a limited two-week run. It will then get a wider theatrical release on 4 March.