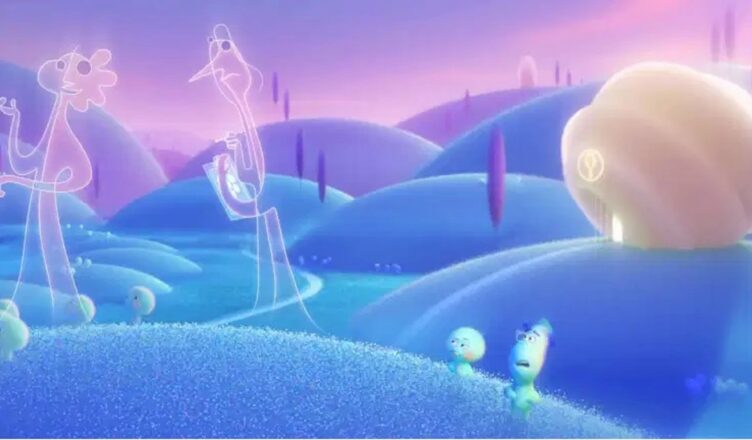 Spirited away: The soul of a musician tries getting back to Earth in Pixar’s ‘Soul’.

SOUL ****1/2 (101 minutes) PG
The latest animated treat from Pixar is easily the most beautiful and bizarre film the studio has produced thus far.

It is also, in all honesty and by any fair measure, the least child-friendly.

As sprightly paced, funny and brilliantly animated as it is, Soul does deal with concepts likely to be beyond the understanding of young kids, coupled with images that prove scary, and not in a fun way.

In a marvellously rendered modern-day New York, music teacher Joe Gardner (Jamie Foxx) has hit that stage of middle age where life’s disappointments have mounted so high and wide, he can’t see passed them.

A slave to jazz, he always dreamt of being a legit musician playing piano in clubs to appreciative patrons. But an unkind world has left him stranded in the classroom where he does his best to inspire those pupils he sees have talent.

His sassy mother (Phylicia Rashad) isn’t much help, constantly criticizing him for wasting him time on music, a career she watched Joe’s father struggle with all his life. She sees her son is stuck in a rut, and she blames the music.

Luck smiles upon him when he lands a gig playing at a local hot spot. He’s so delirious with joy he doesn’t watch where he is going.

Fate then steps in, sending his soul – which resembles a translucent Mini-Me version of Joe – to a cosmic travelator leading to the Great Beyond, represented, of course, by a huge patch of white light.

Eager to get back to his life and fulfill his dream, Joe leaps off and lands in a place called The Great Before. It is here where souls are imbued with human characteristics before being sent down to host a body.

Joe befriends a lost soul called 22 (Tina Fey) and together they take a great leap off a circular diving platform and power dive to Earth.

Joe’s plan is to re-enter his body and complete his quest, but before you can say All of Me – or any other body swap movie ever made (there have been loads) – things don’t quite work out the way he wanted.

Put simply, Soul is a great cascade of entertainment, full of captivating ideas and brilliantly conceived supernatural visuals, all grounded by a story about the modest hopes of a poor schlub.

Director Pete Docter has been responsible for giving solid form to some pretty abstract concepts in Pixar films such as Monsters, Inc and the Oscar-winning Inside Out (he also made Up, another Oscar winner).

With Soul he takes matters one big step further and the images he and his crew have conjured of these celestial netherworlds are at once compelling, beautiful, artistic and delightful.

One eye-popping instance is the vision of a ship sailing through the realm of lost souls. Another shows graceful, surreal beings who look as though they were created by Pablo Picasso or Salvador Dali.

Soul appears to be the studio’s most serious grab for an adult market, given how the film’s themes involve death, the afterlife and resurrection.

It’s not exactly the type of fare young kids who associate Pixar with Cars and Toy Story are likely to embrace or understand.

Soul is not that type of film and there are images in it that could frighten kids, so be cautioned.

The film’s end credits – which go for a whopping 10 minutes; the feature itself is a brisk 90 – lists a host of cultural advisors and experts who apparently informed the creation of the story (written by Docter, Mike Jones & Kemp Powers, credited as a co-director).

This presumably served Pixar’s clear intention of keeping the film’s depiction of the spiritual dimension open to interpretation. And it works. It doesn’t favour any particular religion. Even atheists and agnostics can see their beliefs (or lack of them) reflected in the after-life envisioned in Soul.

Splendidly animated though Soul is – watch it take out an Oscar or two – proud claims that the visual representation of souls in the film were the result of extensive cultural research need to be politely tempered.

Kudos to Pixar for all the groundwork – no question – yet there’s one figure that looks to have inspired the look of Soul as much as anything else – and that’s Casper. As extraordinary an accomplishment as Soul is, those floating, rounded figures will look familiar to oldies who grew up watching The Friendly Ghost.

As with so many films in 2020, the planned cinema release of Soul was completely derailed by COVID-19, and is so being released straight into the stream.

And it’s great that we get to see such a remarkable film, yet the home release automatically comes with a big compromise.

The film was clearly designed as a cinema experience, and seeing Soul for the first time at home – however great your home theatre set-up might be – you intuitively know it’s not how it was meant to be.

It’s sad how the seismic disruption caused by the virus has cost a beautiful film such as Soul a bit of its soul. How much more glorious it would have been to see it big.