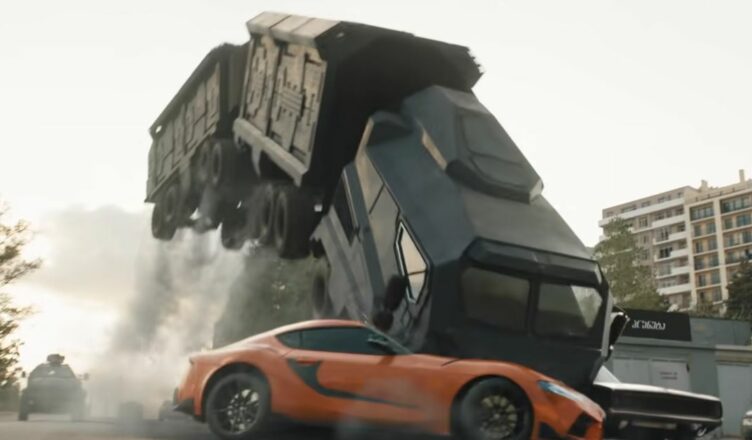 Over easy: A truck has braking issues in the long-delayed ‘Fast & Furious 9’.

FAST & FURIOUS 9 **** (143 minutes) M
It is beyond any reasonable debate that of all the First World Problems that have beseiged our lives with minor inconveniences because of Covid-19, the most irritating of all to endure has surely been the year-long delay in the cinema release of Fast & Furious 9.

Most of the gang have reassembled for the ride with the new addition of John Cena who plays the estranged brother to Vin Diesel’s Dominic Toretto.

We find Dom domesticated and living with Letty (Michelle Rodriguez) and their son in a nice, quiet, secluded house with no signal in the country. The atmosphere is serene and unannounced visitors are greeted with the family hitting panic stations as the boy hides in a box while mum and dad train weapons on the approaching car demanding to know who it is and what the hell they want.

It’s no biggie as the surprisingly interesting plot unfolds. Seems there’s a powerful new device capable of commandeering the world’s communication satellites, which poses a threat to the world should it fall into the wrong hands.

Helping it get into the wrong hands is Jakob, thus setting the stage for a titanic brother-vs-brother battle that underscores all the action that subsequently takes place.

Once again, family values are at the heart of the story holding all the characters together. Those values are frightfully important – one of the film’s central motifs is a crucifix – and a key to how and why the franchise was successfully revived with the fourth film, following the Tokyo Drift, a mediocre outing with not many crucifixes in it.

Those values aside, what sells F9, and the last five films, is the sheer scale and photo-realism of those magnificently preposterous action sequences. These exercises in cinematic overload manage to offset their stupendous silliness with standard-setting stunt work and visual effects that make the physically impossible look as though it is actually happening. And a big part of the fun is how it’s all done straight-faced.

Each FF film needs a gimmick, of course, and the big one here is a ripper involving giant magnets that can toss vehicles around like toys. Very large toys.

Director Justin Lin (he did FF 3,4,5 &6, Star Trek Beyond and the upcoming Space Jam) even gets a weird balletic rhythm going amidst all the screaming, crunching metal and explosions.

In one remarkable sequence during a major chase, the seemingly chaotic and random twirling and upturning of cars is used to transport a person from one car to another.

It’s really rather beautiful, a quality that applies to most of the film’s eye-pleasing VFX sequences. It proves, as Michael Bay has repeatedly demonstrated in his Transformer films, that there is an art to going over-the-top in a way that delivers both thrills as well as a genuine sense of awe.

To labour the point unnecessarily, we saw with the brilliantly conceived skyscraper sequence in FF7, directed by Aussie James Wan, something utterly outlandish being given an almost poetic grace as the car hopped from one tower to another. Pulling off movie moments that crazy takes vision as well as technical skill.

There are some cheeky, self-referential doses of humour in F9 as characters joke about how their exploits throughout the franchise have made them appear almost super-human. It’s one a handful of winks at the audience that this is all magnificent, escapist nonsense, prepared with love for a large and loyal audience.

Fast & Furious 9 is great mass-market entertainment and testament to how few people know their fans as well as the bods who make these films.

More power to them.