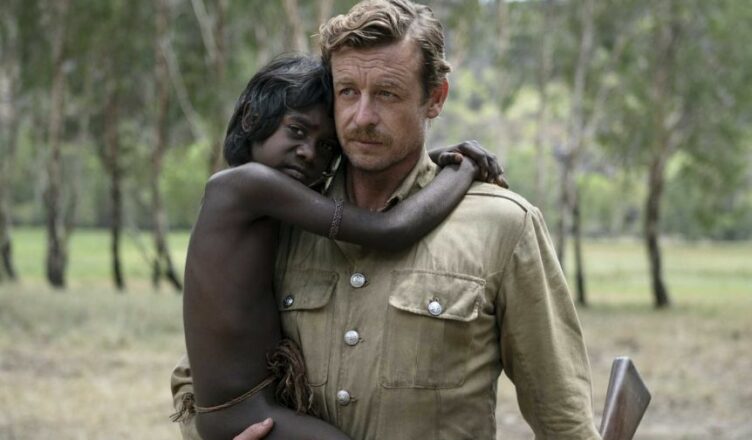 The camera glides slowly above the majestic landscape of Arnhem Land to the sound of tribal chanting, evoking the timelessness of the land and the deep spiritual connection its inhabitants have with the environment that has sustained them for aeons.

Vignettes of an indigenous adult teaching a child survival skills further suggests the harmonious, fragile balance between the people and the terrain.

There is beauty to these portraitures, no question, yet something ominous, even disturbing is signalled by these solemn images. It’s not so much that there lurks a threat to this tranquility, but that you are in the presence of a Very Important Movie.

And that’s all good, but following such a potent visual prelude must come a compelling narrative to match it.

If only that was the case with High Ground, an earnest film with good intent that quickly defaults to cliches and easy-to-digest takes on Australia’s dark past.

It’s 1919 and an innocent tribe of indigenous people are all but wiped out when a search party in pursuit of two indigenous men stumble upon them and get trigger happy.

The horrific massacre leaves only two people alive: a child Gutjuka, who is taken in by the settlers, and his uncle Baywara, who escapes. The atrocity infuriates Travis (Simon Baker); a trained sniper seasoned by World War 1, he is the officer in charge of the operation and he did not want this.

Jump 12 years to 1931 and Gutjuka (Jacob Junior Nayinggul) is as an assimilated teen while Baywara (Sean Mununggurr) has become a vengeful warrior, carrying out raids on local white settlements with his fellow rebels.

White justice arrives in the form of Police boss Moran (Jack Thompson) who oversees the hunt for Baywara. Travis is recruited for the mission, clearly reluctant because of his intimate connection with the incident. Hoping for a diplomatic solution and to avoid further bloodshed, he uses Gutjuka as his tracker in the pursuit of Baywara.

The elements are all in place for a ripper yarn and the first stretch of High Ground is pretty damned captivating as director Stephen Maxwell Johnson (Yolngu Boy) slowly builds a tension that is almost palpable.

Unfortunately, once it becomes clear the film is going to pit white settlers as the Colonial baddies against righteous indigenous folk, the film loses grip and, frankly, becomes rather dull and safe.

A measure of this is how Walter (Aaron Pedersen), an indigenous tracker used in the search for Baywara, is sidelined. Here was a rich opportunity to deepen the conflict and develop Walter into one of the film’s central characters. Yet all we’re given is a cipher. Why cast such a strong actor in the role if you’re not going to max him out?

It also strains plausibility that the raids Baywara and his gang conduct on white settlements result in such a low casualty rate. There’s the one white woman, whose death triggers the official hunt for him, and two others, fleetingly mentioned later in the film. Baywara must be the most careful marauder in the Outback.

Incidentally, we don’t see the killings of these white people by Baywara’s mob. That’s quite a sizeable cheat on the part of the filmmakers given the graphic nature of the film’s opening massacre.

As for Travis, Baker’s gritty performance can’t make up for him appearing as a white angel, so disgusted by the bloodlust of his Colonial colleagues that he’s happy to gun them down on principle, and with no apparent consequence. (Not immediately, anyhow.) He even tells Moran he’d rather shoot him than hunt for Baywara.

To be somewhat cynical, it’s as though Travis is there to represent contemporary white guilt over the historic atrocities committed against the indigenous population. Thus, he discharges his responsibilities and his rifle accordingly. Isn’t that a tad patronizing, that the story required such a thinly disguised white missionary figure to help save the indigenous folk?

The film’s lush visuals – kudos to cinematographer Andrew Commis – and committed performances do stand out, particularly from first-timer Mununggurr.

Regrettably, the film’s many weaknesses stand out even more, chief among them being the Amazonian warrior woman who appears to have dropped into the film from a 1990s movie to deliver a girl-power message.

Then there’s the jarring use of contemporary terms such as “drop” (meaning “kill”) and the wimpy newbie cop who gives comic relief a bad name and who literally runs out of the film once his services are no longer required.

High Ground clearly wants to be a topical, hard-hitting film, but it’s a tough box to tick given its lack of narrative edge, instead positing its rectitude – referred today as “virtue signalling” – ahead of its obligation to tell a more interesting, nuanced, challenging story. Given its didactic air, perhaps the film should have been called High Moral Ground.

And if High Ground feels familiar, don’t fault yourself. Three years ago, we had Sweet Country, a pretty good film from director Warwick Thornton (who gave us the extraordinary Samson & Delilah back in 2005). That film traversed similar thematic territory, but in a more effective genre-driven package.

Also, High Ground is yet another film that confronts Australia’s troubling racial issues by looking back.

It joins a long list of local films that include: Rabbit-Proof Fence; The Tracker; Black & White; Quigley Down Under; The Proposition; and Australia, just to name some.

And that’s all good. May this practice continue with all speed.

Still, would it not also be good to see more contemporary genre films dealing with indigenous issues?

Like, where’s the rom-com where the black activist and the white cop fall in love during a Black Lives Matter demonstration? Or the buddy movie where an indigenous dude and a white guy plan a heist?

Footnote: The film has a clocked running time of 104 minutes with around 10 solid minutes of end credits, much of which is devoted to acknowledging and giving thanks to all the indigenous people and organizations who helped with the filming, particularly in Kakadu and Arnhem Land. It’s an impressive sight and undoubtedly marks the extraordinary level of co-operation possible between filmmakers and First Nations people.