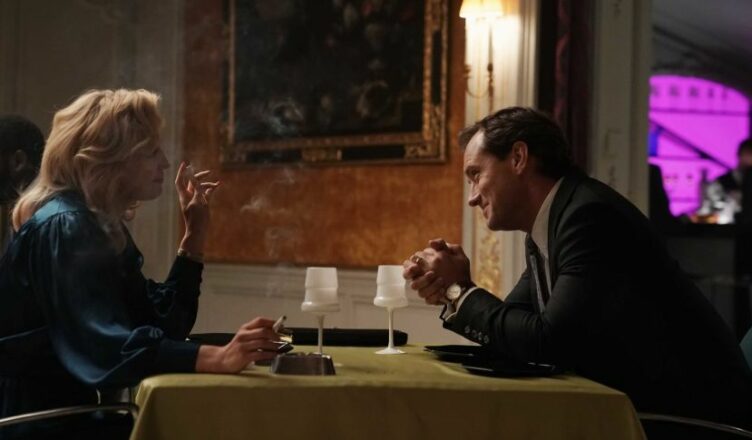 All good: Carrie Coon and Jude Law play parents under pressure in ‘The Nest’.

THE NEST **** (107 minutes) MA
For the first-half hour of Sean Durkin’s superbly directed, unnerving, slow-burning domestic drama all seems fine with the O’Hara family, even though you know it’s not.

Riding the crest of prosperity in the money-hungry 1980s, the O’Hara’s are enjoying life in the upper-middle class, happily ensconced in New York.

But British-born businessman Rory (Jude Law) wants more and persuades his American wife Allison (Carrie Coon) to move the family to England. It’s there, he promises, that new-found opportunities for fortune await thanks to his former boss begging him to come back to work with him in London.

The shift is a big jolt, especially for the teen kids Ben (Charlie Shotwell) and his older sister Samantha (Oona Roche), who have to adjust to new schools, new routines and new friends.

Allison, too, is peeved that she has to sacrifice her job as a horse-riding instructor.

Still, Rory, the epitome of go-get-em 1980s yuppie culture, is as slick a salesman with his family as he is when working the markets.

Welcoming his brood into their grand, if slightly dilapidated rented mansion he wraps everything in warmth, optimism and glowing promise of great days ahead, including a stable of horses for Allison.

Plotwise, there’s nothing visible for a long time as the family members slowly settle into their new life and new habits. Anticipation builds. It’s deliciously excruciating. You know it’s all going someplace, you just have no idea where.

Eventually, inevitably, and with artful subtlety, the first tiny crack appears. Things begin unravelling, gradually at first before the pitch rises and the family finds itself under assault on all fronts.

Durkin, who also wrote the film, has a great feel for building an atmosphere of crisis in carefully measured increments, accentuating key details in setting and character that pay off later when matters hit boiling point, and beyond.

Far more than a belated cautionary tale about yuppie excess, the film is, at heart, a searing cinematic fable about the dangers of deceit and the damaging delusions wrought by denial.

Performances are outstanding throughout, with Jude Law chiming in with one of his best turns to date as the loving father, devoted husband and charming commodity broker whose only real dream is for control over his life.

But it is Carrie Coon as the wife and mother who so poignantly channels the film’s psychological trauma as she tries working out what is happening to her family and the glorious, happy life they were meant to be living.

Emotionally, The Nest is an intricately crafted film for adults, brimming with universal themes. If the film is getting more attention and exposure than it otherwise would have because of the Covid-induced movie drought, good. It deserves it.

Durkin’s previous film was the excellent 2011 drama Martha Marcy May Marlene (2011), which starred Elizabeth Olsen in an absorbing drama about the fallout of being in a cult.

Here’s hoping it doesn’t take a decade before his next film.