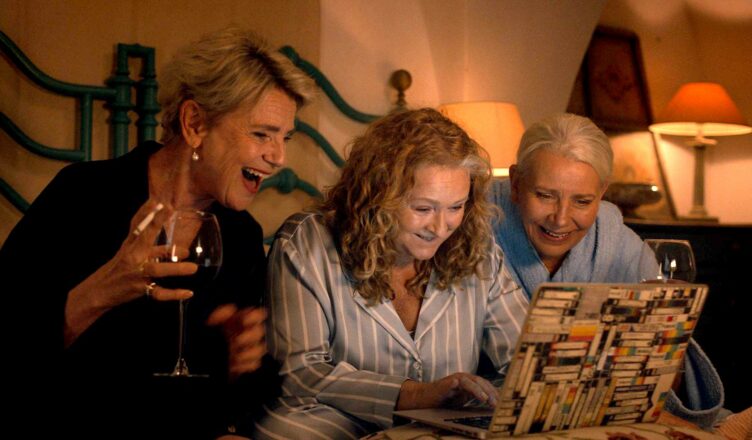 THE FOOD CLUB *** (99 minutes; subtitled) M
An unexpected dose of latter-life liberation comes to three life-long girlfriends in a charming, ultra-lite Danish comedy designed for seniors who like a bit of dirty talk along with their life-affirming life lessons.

It’s a universal truth now widely recognized that one of the joys in cinema is watching elderly characters behaving precisely how they’re not supposed to.

That’s the raison d’être of director Barbara Topsoe-Rothenborg’s delightful, if disposable wisp of a film as it defies stereotypes and pleasantly plugs the central message behind the recent tsunami of films for and about the older demo – The Exotic Marigold Hotel; Going in Style; It’s Complicated, Something’s Gotta Give; The Intern, etc etc; – that it’s never too late to hit refresh on life and get the most out of what remains of it.

After a bit of snooping that involves peering through a bedroom window, loyal wife and business partner Marie (Kirsten Olesen) discovers her marriage of 44 years to Henrik (Peter Hesse Overgaard) is a sham when she catches her husband in in flagrante delicto.

Angry, yet pathetically optimistic about a reconciliation, she heads off to a scenic retreat in Puglia, Italy with her two best pals Berling (Kirsten Olesen) and Vanja (Kirsten Lehfeldt). There, cooking becomes a neat metaphor for life as the three of them engage in late-life gear changes.

For Berling, a hedonistic life has nonetheless left her discontented; Vanja is still preoccupied with her late husband and her dog; and Marie has to learn that the difference between an excuse-making husband and a rat doesn’t let a lot of light through.

Apart from the scenery and the energetic lead performances, the best things about The Food Club – which really should have stuck with its magnificent original title Madklubben – are the little gems of liberating honesty that spark up when each character hits their moment of truth.

These scenes are well-crafted and connect nicely to the film’s opening scenes showing the trio as young women fighting for equal rights. It’s as though they’re finally getting a meaningful pay off.